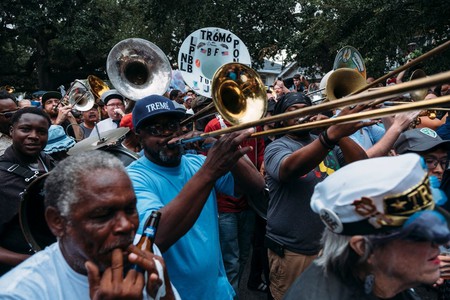 New Orleans is full of interesting traditions that stem from its European and Afro-Caribbean roots. Some of them were developed out of convenience, such as eating red beans and rice on Mondays, while others are firmly rooted in Catholicism. But the traditions of the city have evolved over time and are often inclusive and communal, typically revolving around dining and celebrating.

Red Beans and Rice on Mondays

Before washing machines became popular, Monday was considered “laundry day,” so resourceful housewives in New Orleans didn’t have much time to cook, as they had to wash all their garments by hand. Dinner had to be something that could cook by itself. So, the night before, they soaked kidney beans overnight; after soaking and draining them, they set them on the stove to cook all day, then added spices and the “trinity” of onions, celery, and peppers. It’s also traditional to throw in a ham bone, letting it flavor the beans, along with a bay leaf. Many still add andouille sausage or tasso ham, too. Of course, mandatory laundry on Mondays isn’t a thing anymore, but the tradition of serving red beans and rice is here to stay. The meal is easy, inexpensive, flavorful, and ubiquitous in households and restaurants; sometimes you can even get it for free in a dive bar, especially when the New Orleans Saints are playing on Monday Night Football. 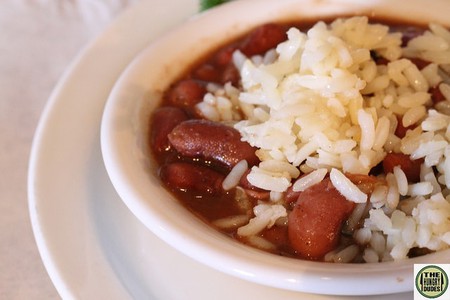 “Carnival season” refers to the period of time that begins on January 5th (Twelfth Night, then The Feast of the Epiphany on January 6th) and leads up to Mardi Gras; Mardi Gras’ exact date changes each year, based on when Easter falls. During Carnival season, it’s hard to turn down a slice of king cake, cinnamon roll-like cake that is generally made out of a sweet brioche dough, in the shape of a hollow oval. The top is glazed and sprinkled with colored sugar (purple, green, and gold—the official Mardi Gras colors that represent justice, faith and power). The cakes are available at grocery stores, restaurants, and coffee shops, and some are filled with decadent flavored cream cheese, while other bakers prefer the more traditional, less sticky-sweet variety. Chew carefully, though; king cakes also feature a single, small plastic baby inside, which represents the Baby Jesus. If you’re the lucky one who gets the baby, it’s considered good luck, but it also means that you’re responsible for buying the next cake. 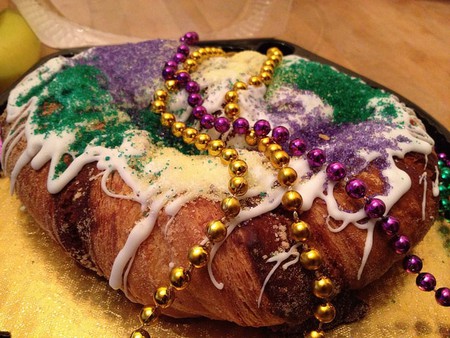 Every year, New Orleanians join together to revel during Carnival season. The season, which lasts until Fat Tuesday, aka Mardi Gras, is full of celebrations, parades, street parties, concerts, and other special events, which take place all across the city and draw in thousands upon thousands of visitors. The season is filled with satire and merriment, before the “fasting season” of Lent, rooted in Catholic traditions and history. It’s also a chance to demonstrate profound creativity (costumes are strongly encouraged), and while there’s a sense of mischief and chaos, it’s also highly organized. Carnival groups known as krewes (“social organizations”) build and decorate floats, plan parades, craft elaborate costumes, and put in effort for months before the season even starts. While visitors may view this time as short-lived, behind the scenes, New Orleanians are effectively gearing up for the fabulous fête, year-round. The event is followed by Ash Wednesday and Lent, the season of repenting and reflecting, until Easter.

“Second line” is a tradition in brass band parades across New Orleans. The “main line” or “first line” features the main section of the parade, or the members of the organization with the parading permit, as well as the brass band. The “second line” refers to everyone else. It’s commonly witnessed during weddings and other happy occasions, and it also serves as a celebratory way to send off the deceased, particularly if it’s a prominent member of the community, or a cherished musician. 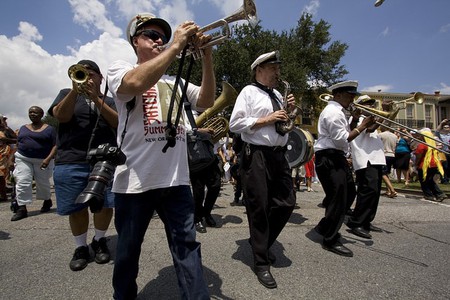 The word lagniappe is pronounced “lanny-yap,” and it means, “a little something extra.” It refers to small tokens of appreciation during a transaction or exchange. A common example is a baker’s dozen, an extra free splash of booze in your cocktail, or just another kind gesture. It stems from the Spanish Creole term la yapa or ñapa, referring to a free bonus item.

Residents’ Catholic roots run deep in New Orleans, and much of the traditions in the city are French-influenced. Derived from the French word for “awakening,” Reveillon takes midnight snacking to the next level. Originally, it was a meal served after midnight mass on Christmas Eve. It began as more of a family tradition, in the home, but now it has evolved, and is served in various restaurants around the city, often at a fixed-price for four or more courses.

Bottoming Out Your Car on a Pothole

OK, this one’s way less fun and whimsical than some of the other experiences that are listed, but New Orleans, while delightful, is severely lacking in smooth streets. If you’re driving for more than 10 minutes, it’s likely that you’ll find yourself swerving to avoid a pothole, and sometimes, you’re not so lucky. Potholes are such a big part of life here that last year, one of the local news outlets, WGNO, even aired a segment titled “Pothole of the Day” on their “News with a Twist” program. While residents wait for them to get fixed, they often find creative ways to alert others of the potholes’ existence, sometimes by filling them with Mardi Gras beads. 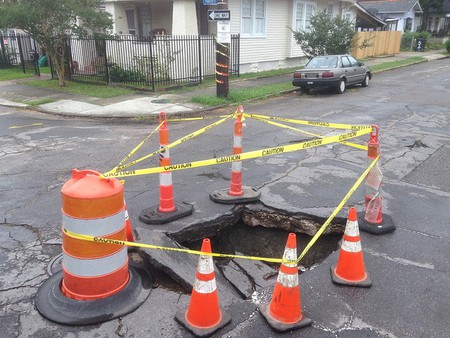 Evacuating during hurricane season is difficult; no one wants to sit in a hot car in backed-up traffic for hours worrying if they are going to have anything to come back to. Many of the storms also end up dissipating or switch directions before making landfall. So, while we wait for hurricanes to strike, we keep an eye on the news and head to the store to load up on supplies (non-perishable snacks, ingredients that can be thrown on a grill, in case the power goes out, bottled water, and a lot of booze). Then we have friends come over to hunker down together.

Snowballs in the Summertime

Do not confuse a snowball with a snow cone, which is ubiquitous across the country. While the concepts are similar, the texture of a snowball is far superior. We have Ernest and Mary Hansen to thank for that. According to a report, Ernest Hansen wanted to buy a push cart so he could be a street vendor, but he disliked the “unsanitary conditions.” Ever-resourceful, he invented a new machine that cleanly shaved ice blocks into a snow-like texture. He patented the ice crusher in 1934, and he and Mary opened Hansen’s Sno-Bliz a few years later. The iconic snowball stand is still family-owned and operated by his descendants, and a number of other snowball stands and shops exist all over the city using the technology he pioneered. Inexpensive and refreshing, snowballs are an essential survival tool and a sweet, simple treat for getting through the hot, humid summers. Tip: for a truly decadent delight, order your flavor of choice, and ask for it to be served with sweetened condensed milk. 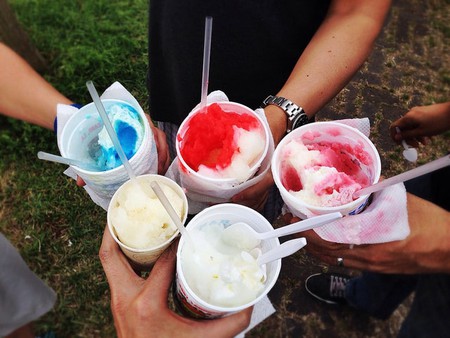 Super Sunday, held on the Sunday in March that is closest to St. Joseph’s Day (March 19th), is a strong tradition for the Mardi Gras Indian tribes in New Orleans. On this day, they don intricate, hand-made feathered suits as they march in a procession through the streets of their neighborhoods. During the processions, the participating Mardi Gras Indian tribes, led by their Big Chiefs, meet other tribes (or “gangs”) and perform ritualistic dances and chants. Each tribe and their Big Chief tries to outdo the other in a friendly competition, witnessed by appreciative spectators. Despite the name, the Mardi Gras Indians are mostly comprised of the African American communities in New Orleans. While they parade, often as individual tribes, throughout the year, Super Sunday is the day where they all gather to demonstrate this rich historical tradition. The most popular gathering spot to witness this is in the Central City neighborhood. 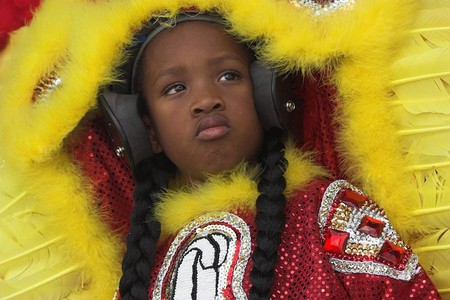 Super Sunday is popular in New Orleans. | © Derek Bridges / WikiCommons
Give us feedback