The 10 Best Restaurants For Creole Cuisine In Louisiana

Louisiana’s history is reflected in its Creole cuisine. It’s a mix of flavors that have been informed by Spanish colonists, French settlers, Afro-American slaves, and Italian and Irish immigrants. Here is a list of the 10 best places to sample Creole fare. 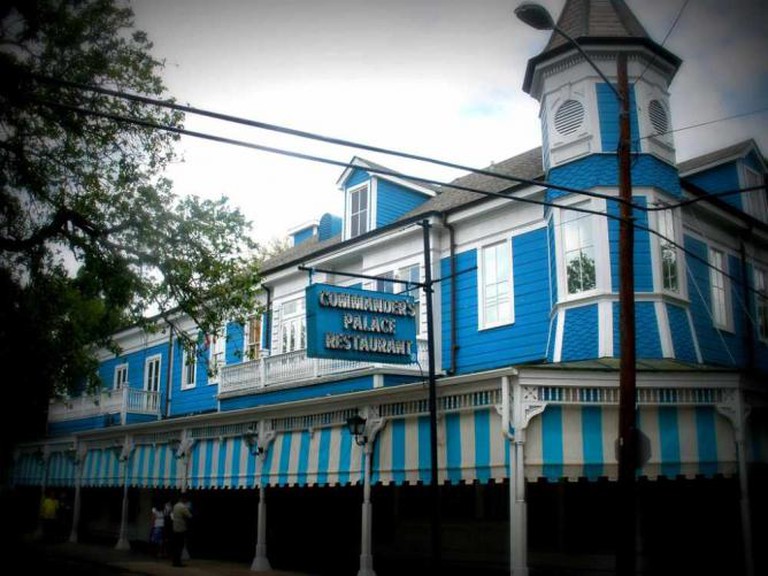 Commander's Palace | © Katie T/Flickr
Commander’s Palace is a New Orleans institution located in the Garden District and built in 1880 by Emile Commander as a future wedding present to his daughter. Chef Tory McPhail provides a menu of Haute Creole dishes that has won him the James Beard Best Chef: South award. And the awards won by Commander’s Palace are extensive too – have a look on their website here for the full list that includes Best Restaurant in New Orleans in 2015 from The Gambit, and Best Creole Food in New Orleans Magazine for 2015. On the dinner menu, you’ll find dishes including entree courses of potato or pecan-crusted Gulf fish, Breaux Bridge crawfish risotto, and braised veal osso buco.
Open In Google Maps
1403 Washington Avenue, Garden District, New Orleans, Louisiana, 70130, USA
+15048998221
Visit Website
Give us feedback

Johnson’s Boucaniere in Lafayette is a little different to the grander New Orleans restaurants. It serves up a more earthy form of Creole cuisine with big flavors like smoked garlic sausage and beef jerky and barbecued briskets. Their specialty is boudin, which is prepared to a classic recipe dating back to 1937. So good is the fare served at Johnson’s that they’ve been profiled by newspapers and magazines from far and wide – the Vancouver Sun, USA Today, Southern Living and Bon Appétit among others. On the menu are breakfasts of stuffed grilled cheese biscuits with sausage and boudin, daytime sandwiches of pulled pork and chicken, and good old-fashioned chicken and sausage gumbo.
Open In Google Maps
1111 Saint John Street, Downtown, Lafayette, Louisiana, 70501, USA
+13372698878
Visit Website
Give us feedback

This is the oldest of all the French-Creole restaurants in New Orleans and one of the best, too. Founded by Antoine Alciatore way back in 1840, the restaurant is still run by the same family, five generations on. There are 14 dining rooms at Antoine’s, which sits on St Louis Street in the French Quarter. It’s the birthplace of many dishes including Oysters Rockefeller and Pompano en Papillote. Have a look at their website here for all of the profiles in the national media prompted by the 175th birthday of Antoine’s in 2015. On the dinner menu are Oysters Rockefeller, Thermidor, Bienville and a la Foch. Or there are escargots a la bourguignonne or bordelaise and entrees of Chateaubriand steaks or chicken with Rochambeau sauce.
Open In Google Maps
713 Saint Louis Street, French Quarter, New Orleans, Louisiana, 70130, USA
+15045814422
Visit Website
Give us feedback

A great New Orleans spot for Creole cuisine, Mr B’s is located at the intersection of Royal Street and Iberville and is run by Cindy Brennan, a member of the legendary Brennan dynasty of New Orleans restaurateurs. Mr B’s Bistro opened its doors in 1979 and has enjoyed so much success that they’ve put out their own cookbook. Executive Chef Michelle McRaney spent time working under the modern master of Creole cuisine Emeril Lagasse. She offers a menu with appetizers of duck spring rolls, oysters on the half-shell, and braised pork belly to get you started. Then there are entrees of bacon-wrapped shrimp and grits, filet mignon with truffle butter, and BBQ shrimp served with pepper sauce and French bread.
Open In Google Maps
201 Royal Street, French Quarter, New Orleans, Louisiana, 70130, USA
+15045232078
Visit Website
Visit Facebook page
Give us feedback

Louisiana Lagniappe started out in Destin, Florida in 1984 before coming to Baton Rouge in Louisiana in 1998. The menu is focused on Creole classics cooked to perfection. Expect appetizers of crab cakes, Oysters Lagniappe, blackened shrimp, and homemade boudin served with remoulade. Then there are specialities like chicken Acadiana, fish en papillote or Louisianne, or shrimp and andouille pasta, or a steak made tournedos style with garlic butter and topped off with sautéed shrimp and crabmeat.
Open In Google Maps
9990 Perkins Road, Oak Hills Place, Baton Rouge, Louisiana, 70810, USA
+12257679991
Visit Website
Give us feedback

Galatoire’s was established in the French Quarter of New Orleans in 1905 by Frenchman Jean Galatoire who brought a store of recipes with him from his homeland and is still, in part, owned by his descendants five generations later. Famously, you couldn’t book a table here until 1999; even senators had to wait in a line that often stretched down Bourbon Street. Tennessee Williams used to dine here where he was in town, and Galatoire’s even gets a mention in A Streetcar Named Desire. Ranked number 15 in The Daily Meal’s list of the 101 best restaurants in the USA in 2014, Galatoire’s serves up Creole classics like veal sweetbreads with lemon caper beurre blanc, Oysters en Brochette, shrimp remoulade, seafood okra gumbo and lamb chops with garnishes including Clemenceau, Marchand-du-Vin and Bonne-Femme. 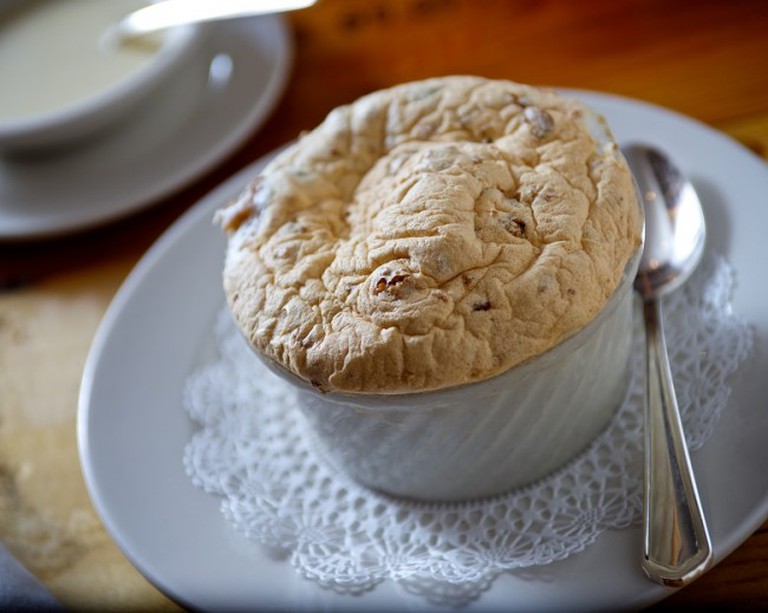 The Blue Dog Café is an excellent spot for some Creole cooking in Lafayette. There’s also live jazz and acoustic music put on to keep diners entertained. The restaurant takes its name from the Blue Dog series of paintings made by George Rodrigue based on the old Louisiana legend of the loup-garou. There’s more info on the paintings from George’s wife Wendy here. At the restaurant, there are artworks from Rodrigue on show along with a classic Louisiana menu with dishes like smoked duck quesadilla, grilled shrimp remoulade, crab cakes au gratin, and seafood gumbo.
Open In Google Maps
1211 West Pinhook Road, Lafayette, Louisiana, 70503, USA
+13372370005
Visit Website
Give us feedback

At Restaurant August, you’ll find a contemporary take on Creole classics. Based in the central business area of New Orleans in a magnificent 19th-century building that retains its mahogany paneling and antique mirrors, Restaurant August is part of the empire of leading TV chef John Besh. It’s been featured in plenty of newspaper columns and online magazines – great write-ups have come in The New Orleans Advertiser and The Infatuation’s run-down of The Essential New Orleans Restaurants. On the menu are dishes like shrimp étouffée with ginger and fermented pepper, pan-seared scallops with tête de cochin, and roasted duckling with charred cabbage and foie gras jus.
Open In Google Maps
301 Tchoupitoulas Street, Central Business District, New Orleans, Louisiana, 70130, USA
+15042999777
Visit Website
Give us feedback

Restaurant, Cajun, $$$
Facebook
Email
Twitter
Pinterest
Copy link
Share
Map View
For classic Creole fare in The French Quarter, The Original Pierre Maspero’s is as good as anywhere. In one of the oldest buildings in the city, built in 1788, the space now used as the restaurant has over the years been frequented by the famous smugglers Jean and Pierre Lafitte as a base and a place where they met General Andrew Jackson to plan the defense of New Orleans against the British in 1812. Pierre Maspero’s serves up breakfasts, lunches or dinners, with things on the menu like eggs Benedict, andouille and eggs, fried green tomatoes with shrimp, French onion soup, and chicken and andouille gumbo.
Open In Google Maps
440 Chartres Street, French Quarter, New Orleans, Louisiana, 70130, USA
+15045248990
Visit Website
Give us feedback
Give us feedback