Massive Alligators are Causing Complete Chaos in the United States 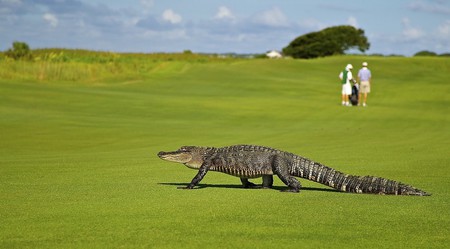 While Northerners might believe alligators are as common as dogs down South, that’s simply not true. That said, we must admit that alligator sightings are increasingly common, especially this spring. With a wave of huge alligators wreaking havoc across Southern states, everyone above the Mason Dixon Line should remain calm: these alligators only seem to be terrorizing Southerners…for now.

The gator invasion began on April 28 with the first sighting of an 11-foot alligator on the front porch of an Orlando home. Talk about an uninvited guest, a 600-pound uninvited guest. Luckily, the homeowners were out of town at the time and nobody was injured. Another alligator incident occurred on April 30, when an 11-foot gator decided to camp out in the middle of U.S. Route 59 in Cleveland, Texas. First responders were eventually able to capture the beast and release it into a nearby lake, but they were unable to answer the question “why did the alligator cross the road.”

Alligators are slightly different than that ticking cartoon crocodile in Peter Pan. Though they stem from the same ancestry, alligators are smaller in size and weight, have a snout that’s wider and rounder, and prefer freshwater to saltwater. These large creatures are also darker in color than crocodiles. As the OG reptiles, there’s probably a pretty good reason alligators have outlived dinosaurs, but we’re not about to pull a Steve Irwin and get close enough to find out why.

Most recently, a 15-foot alligator was spotted creeping through a Central Florida field before casually plowing through a barbed wire fence completely unphased by the barrier designed to keep critters out. Another Florida gator terrorized Target shoppers in a Jacksonville Beach parking lot, though it’s unclear if the creature meant harm or just wanted drop $300 on stuff it didn’t need.

According to the Florida Fish and Wildlife Commission, we’ll likely be seeing plenty more gators as mating season is in full swing during May and June. Or until someone—Mark Zuckerberg, cough, cough—creates Tinder for reptiles. In the meantime, much like the heat and the humidity, it’s just another Southern thing we’ll have to deal with. At least we still have drive-through daiquiris to help us get by.