Kentucky Is Home to the World’s Largest Cave System 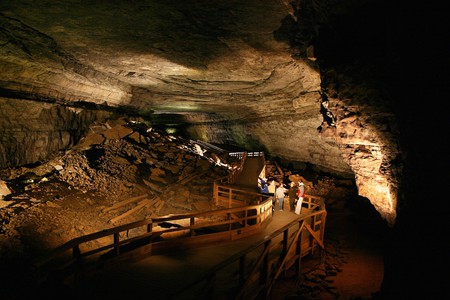 Hidden beneath the surface of Kentucky bourbon country lies the largest cave system on Earth. With more than 400 miles (642.7 kilometers) of mapped passageways, Mammoth Cave is a subterranean world waiting to be discovered by fearless travelers.

Welcome to the largest cave system on Earth

With more than 400mi (642.7km) of mapped passageways, Mammoth Cave is by far the longest cave on the planet. It’s so massive that the runner-up, Sistema Sac Actun in Mexico, is half the size. Essentially, Mammoth Cave (so named for its sheer size) could fit the Grand Canyon inside it and have room to spare.

Surveyors discovered new rooms and passages throughout the 20th century, linking caves together to become the largest of its kind. Still today, new sections are being mapped, and Mammoth Cave rangers estimate the cave could contain upwards of 1,000 total miles (1,609.3km). While only a sliver of that – roughly 14mi (22.5km) – is open for tours, the park provides an awe-inspiring glimpse into a realm of mystery and intrigue. 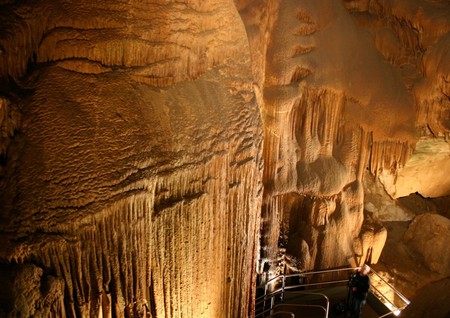 Origins of the cave

Initially drawn to the region for its gypsum, mirabilite and other minerals, Native Americans were the first to discover Mammoth Cave some 4,000 years ago. Petroglyphs and ancient tools left evidence of their past, preserved by the cave’s steady temperature and humidity. These are also prime conditions for preserving human remains, some of which have been found buried in the caves or trapped under rock formations.

Fast-forward to the early 1800s when John Houchins found the cave after following a wounded black bear to the entrance. With more advanced excavating tools, this led to the discovery of a vast subterranean world filled with passageways, unseen creatures and potential resources. The cave turned into a valuable refuge during the War of 1812; when British troops stifled gunpowder supplies in the east, the US Army was able to use the cave’s abundant calcium nitrate to create more gunpowder and fight back.

Possibilities for the cave were seemingly endless, and with a newfound spotlight on this mysterious place, folks began visiting in droves. While other uses for the cave failed, including testing it as a tuberculosis treatment center, tourism stuck. Cave tours have captivated the public uninterrupted since 1816. Led by the likes of Stephen Bishop and Max Kämper, the cave’s earliest guides helped map and name many of its numerous rooms, domes and passageways.

In the 1920s, tourism was at its peak, and as a reaction to the increasing fanfare, a movement began to designate Mammoth Cave a national park to preserve the region from development. It was established as such in 1941, followed by a UNESCO World Heritage site designation in 1981 and an International Biosphere Reserve in 1990. 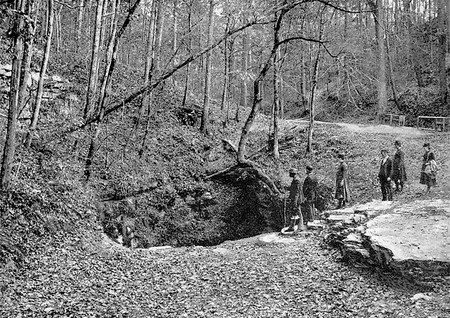 Tours of the cave have run uninterrupted since 1816 | © NPS Photo

Visitors to Mammoth Cave have lots of options when it comes to underground exploration. Since the earliest days of the cave, tours have started at the natural Historic Entrance, and today, the tradition continues with routes such as Gothic Avenue, Violet City Lantern and Discovery Tours.

No matter the tour, excursions reveal enchanting formations like stalactites, stalagmites, columns and bottomless pits. A layer of sandstone close to the surface preserves the cave by keeping water from dripping in, though there are sections where dissolved sandstone resulted in incredible formations. The Frozen Niagara Tour examines a segment of the cave where water seeps through. Combined with carbon dioxide and slowly formed over thousands of years, this led to surreal rock shapes in all kinds of drippy forms. The aptly dubbed Frozen Niagara looks like a waterfall made of stone.

The Domes and Dripstones Tour is another enlightening option. Beginning with a stroll through a lush forest, visitors enter a door in the woods and descend hundreds of feet down some stairs to a series of passages. These include amphitheater-size rooms, narrow crevices and intimate looks at dramatic dripstone formations.

For fearless adventurers, the Wild Cave Tour is a six-hour foray into the darkness that includes spelunking and entails spending most of the journey on hands and knees. 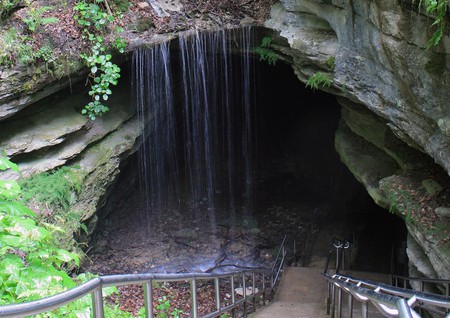 Naturally, venturing into a dark abyss requires some protocols to ensure a safe visit to the caves.

It all starts with selecting the right cave tour for you. Only 14mi (22.5km) of the cave system are accessible to the public, so there’s no chance of accidentally wandering off into an underground maze. However, certain routes are more demanding than others. Folks with knee or back issues should stick to tours that don’t involve crawling on the ground or descending lots of stairs. The Mammoth Cave website is very clear and descriptive about what to expect on each tour. For instance, Frozen Niagara and Mammoth Passage Tours are both far easier and shorter than treks like Violet City Lantern, which lasts three hours and requires carrying lanterns.

No matter the selection, closed-toe shoes are necessary, to protect from potentially bumping into rocks. Visitors should keep an eye on the ground in front of them, as surfaces can be slippery and craggy in spots.

Bags are permitted, but only so long as they don’t extend above the shoulders or below the waist, to prevent from snagging. Flash photography is also not allowed.

The year-round temperature in the cave hovers in the upper 50s Fahrenheit (12.7–15C), so dress accordingly in long sleeves and light jackets, especially for longer tours. 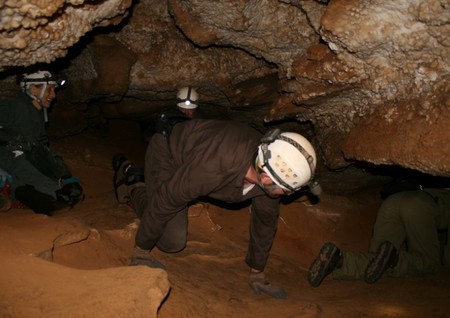 To ensure a safe trip, visitors should know their limits and physical abilities | © NPS Photo

Despite the eerie quiet of the cave, roughly 130 species call this place home.   Bats are Mammoth Cave’s most popular denizens, which can occasionally be spotted on tours and especially at night. Several species dwell in the cave, including gray bats, Indiana bats, little brown bats and eastern pipistrelles.

Other cave inhabitants include Kentucky cave shrimp. The endangered crustaceans are eyeless and albino, living exclusively in the waterways of the cave’s lowest levels and feeding on decaying organic matter. Similarly, eyeless fish have adapted to darkness and solitude, with an opaque, almost translucent color.

To this day, Mammoth Cave continues to reveal new facets and passages, making this mysterious labyrinth as captivating as the days of its first discovery. 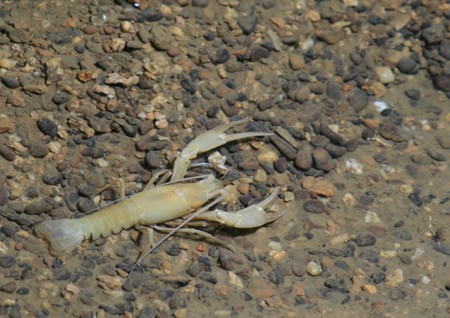