The Wizard of Oz: A Contemporary Cult Classic 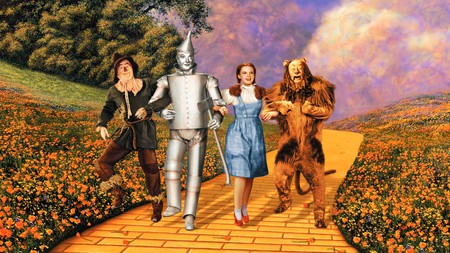 The Wizard Of Oz | © Metro-Goldwyn-Mayer

The Wizard of Oz enthrals the imagination, transporting the viewer on an immersive journey into a magically surreal land full of dark adventures and symbolic undertones. Watching it as a child, adult or even scholar leaves the film open to unlimited and broad interpretations. Considering the book celebrated its centenary and the film not far behind, The Wizard of Oz has captured American visions and worldwide imaginations to this day. How and why has it remained so relevant in contemporary culture?

The Wonderful Wizard of Oz was written by L. Frank Baum in 1900 and was the first novel to proceed 13 sequels concluding with Glinda of Oz, published a year after Baum’s death. His fictional novel was transformed into the 1939 film The Wizard of Oz, directed by Victor Fleming and featuring Judy Garland. The social impact of the film remains so great that in 2007 it received a UNESCO Memory of the World status.

Set in 1939, the film depicts protagonist Dorothy as she is thrust into the fantastical world of Oz leaving behind her life on a family farm in Kansas, America. This young girl, who dreams of a place where ‘trouble melts like lemon drops’, finds herself in a colourful world where evil witches and flying monkeys torment the land. Desperate to return to Kansas, the plot rests on Dorothy’s attempt to find her way back to the farm. She meets the Scarecrow, Tinman and the Cowardly Lion who embark on an adventure with Dorothy. Finally, she mutters her famous phrase ‘theres no place like home’ and awakes in Kansas.

The film has paved the yellow brick way for a barrage of adaptations including multiple film versions, theatre productions, musicals and radio series. It remains prevalent in today’s popular culture, as posters of Wicked adorn buses and train stations and queues for the production filter onto Broadway and the West End.

The film has earned cult status due to its availability for academic engagement, the surreality of its characters and endearing visuality. Its imaginative and fantastical quality invites the viewer to question the different interpretations of Dorothy’s journey and the characters she meets. This open-ended subjectivity has lent a timelessness to the film as it is still being critically analysed and pondered upon in contemporary society.

The relationship between Kansas and the world of Oz also invites interpretation. The film revolves around Kansas to show Dorothy’s varying attitudes and emotions towards her home state. When the film begins Dorothy is singing about the proverbial rainbow. This scene, shot in dreary monochrome, implies Dorothy’s desire to escape Kansas. This is subverted by the overall plot in which she is attempting to return again, this time shot in intense colour.

The film propelled Kansas into the corners of the world, placing it on the map whilst reforming its identity. The state embraced its role in the film and entertained this imaginative quality by building a museum, not to mention shops and restaurants that playfully incorporate the film. The Oz Museum is a collaboration with volunteers, and serves as a trove of memorabilia from the film and all things related to the cult classic.

The Land of Oz was a theme park that opened in 1970 in North Carolina. In its former glory it attracted around 20,000 visitors, however only 10 years after its opening, visitor numbers had dwindled, forcing it to shut down. The theme park led visitors around Kansas before taking them along the yellow brick road towards the Emerald City. Abandoned and dilapidated, the park became a ghostly reminder of the once vivid and glorious land of Oz. Ghoulish figures and houses in decay remained as traces of the park to provide sinister undertones reminiscent of those included in the film. However, the past years have seen volunteers rescuing it bit by bit. Digging weeds, restoring the yellow brick road and fixing the props, the theme park has been given a new lease of life. Tourists can now visit the Land of Oz and enjoy guided tours as well as an overnight stay in Dorothy’s cottage.

The fantastical story of the Wizard of Oz has shaped both the imaginative and physical landscape of America. The story holds a timeless quality that unites generations whilst remaining socially and contextually relevant. Ingrained into the identity of Kansas, The Wizard of Oz is clearly still loved worldwide.