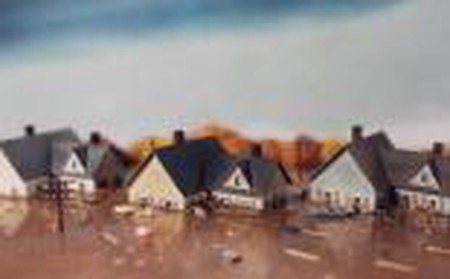 Born in Kansas, Lori Nix’s photographs present a world on the brink of destruction. The artist spends months constructing her dioramas, creating most of her minature worlds with paper, cardboard and foam, painted over in a painstakingly realistic manner. The resulting photographs are both impressive and uncanny. 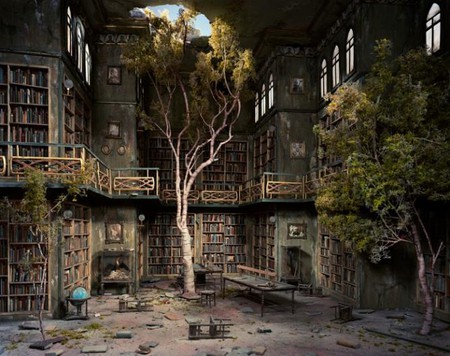 A grim, dusty room reveals traces of what was once a grand library. Lofty ceilings, sweeping bookshelves, classic balconies, gold framed paintings and gothic style clerestory windows have been replaced by an ominous scene. Broken furniture is strewn about the floor, a sizeable hole in the roof casts patches of light over a mostly darkened room, where grown trees have forced their way through the floorboards to reclaim the abandoned space.

Artist and photographer Lori Nix creates miniature dioramas before photographing them, revealing her preoccupation with apocalyptic realities. Although she describes herself as a photographer, she builds her chosen subjects rather than capturing them in the real world. The process is extensive as Nix, together with her partner/assistant Kathleen Gerber, typically spends around seven months sculpting, assembling and painting her mini-worlds, and then three weeks photographing them. As such she is able to produce roughly three final photographs in a good year, working simultaneously on different projects. When asked about her influences she names landscape painters, particularly 18th century romanticists like Casper David Friedrich, for whom the recreation of the sublime was the object of their art.

Nix identifies her 1970s upbringing in Norton, Kansas as key to her artistic development. With little taking place in this rural town, which boasts a population of 3,500, the unpredictable and often extreme Kansas weather was a trigger for community engagement and a source of excitement among the young children. Also particular to her childhood experience was a fascination with the decade’s dystopian films such as Towering Inferno or Planet of the Apes. An air of disaster has come to dominate her work as a result, which she usually combines with an element of humour. 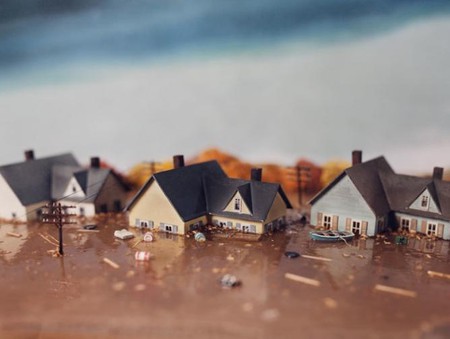 Library (2007), the scene described above, is part of the artist’s most recent series titled The City. Begun in 2005, Nix plans to continue this group of works for at least three more years. For the project she has imagined a future metropolis where an unidentified catastrophe has wiped human presence from the earth. Free from the control that people once exerted over the land, nature prevails, overtaking the man made environment. Museums, beauty parlors, churches, and shops no longer operate, and have become subject to entropy. An ominous message is directed at those who give little importance to the human impact upon the environment whilst serving the artist’s fascination for the possibilities of a future world overtaken by nature.

Humour lies in the viewer’s knowledge that these scenes are false and they have been created in miniature. The use of materials is also light hearted, as the artist constructs figures and landscapes with items such as cardboard, paper towels and clay, and the fabricated quality is often evident. 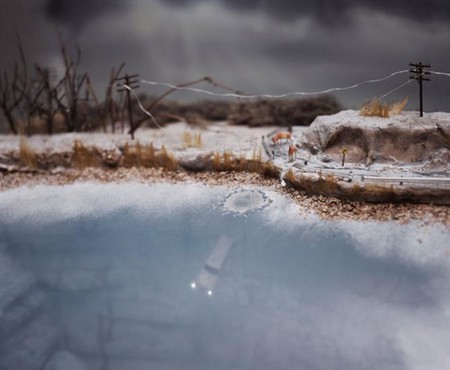 For her earliest series, Accidentally Kansas, Nix relied primarily on small scale models made for hobbyists for her dioramas. She used a shallow depth of field and created scenes reminiscent of the natural disasters and human tragedy like that which she witnessed in her hometown. In Flood (1998) blue and yellow slanted roof houses are submerged up to their second storey windows in a murky brown water. Wooden boards, cans, tires and other detritus floats at the surface. In Ice Storm (1999) a hole can be detected on the surface of a frozen pond in the foreground, and beneath the ice a car with flashing headlights sinks headfirst into the piercingly cold water below. In the background two deer graze on a highway. In front of one of the deer, the metal guard rail running along the road has been rip apart, revealing the narrative which led to the tragic fate of the driver.

In both her ‘Lost’ and ‘Some Other Place’ series, rustic and urban environments are presented in uncanny ways, while Unnatural History, a black and white series which she is working on concurrently with The City, presents a behind the scenes view of a natural history museum where reliance on science is at a minimum. The initial ideas for her projects are usually formulated during the artist’s morning commute from Brooklyn to Manhattan where she works as a commercial photographer. She begins to research using books and Google images, or embarks on site visits to gain a better idea of her plan. These initial steps involve only a small amount on preparatory photography and depend instead on her memories of a place, its colours and lighting. 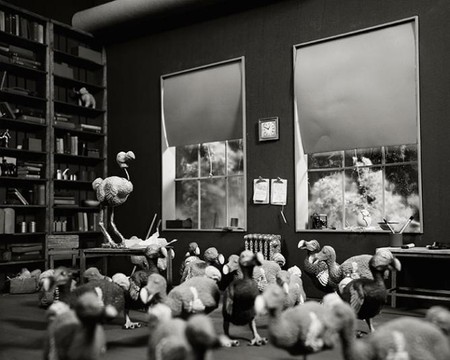 Nix relays that her primarily concern is to allow viewers to bring their own associations to the table when confronted with her photographs, highlighting the subjective quality of the medium. Likewise, she states that photography should have the ability to introduce a fresh outlook to an audience. Nix’s perspective is an unusual one, and she seems to have identified the ideal method of working for her temperament. A perpetual daydreamer, she could never become sufficiently aware of her surroundings in order to succeed as a photo-journalist. Furthermore, her preference for working from home instilled little desire for travel photography. Instead Lori Nix’s works spring from the imagination, combining her exterior and interior worlds.