The 10 Most Beautiful Towns In Kansas 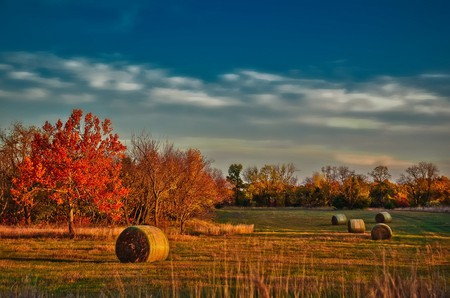 Beauty comes in all shapes and sizes, which is evident in the towns that dot the Kansas landscape. From smaller cities famous for their Wild West heritage to tiny gems with lively art scenes, the state has many lovely towns brimming with photogenic opportunities and fun adventures. Here is a list of ten of the most charming spots found throughout the Midwest state of Kansas.

Located at the end of the historic Chisholm Trail, Abilene is a scenic town with a rich history. Not only was it a wild Old Western town, but it was also the hometown of President Eisenhower. History buffs will enjoy visiting Old Town Abilene for a taste of the Wild West, with saloons featuring cancan dancers and reenactments of gunfights. Other must-see places include the Seelye Mansion, a 25-room Georgian-style mansion, the Eisenhower Presidential Library and Museum, and the American Indian Art Center, which showcases fine art by artists from numerous tribes.

Atchison, the birthplace of Amelia Earhart, is a picturesque community located along the Missouri River in northeastern Kansas. Once a popular transportation center, Atchinson became a favored town in the late 1800s. Many people settled in Atchison and built stunning Victorian homes which can be still be seen by taking a trolley tour or strolling along the brick streets. Today there are people who believe that many of these buildings are haunted, giving it the title of ‘the most haunted town in Kansas.’ Paranormal enthusiasts may participate in tours and events, including mystery dinners and spiritual readings, celebrating ‘Haunted Atchison.’ Other events take place throughout the year, including the Amelia Earhart Festival. 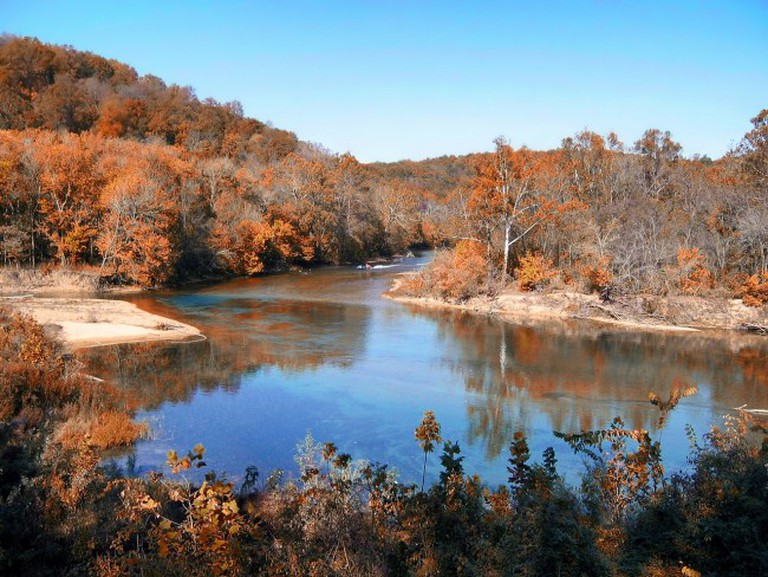 Located in the heart of the Flint Hills, Cottonwood Falls is a charming little town in itself, plus an excellent base from which to visit the surrounding area. The town has a lovely downtown area with shops and restaurants, and features a brick-paved street perfect for meandering to the famed Chase County Courthouse. Built with native limestone from the Flint Hills, the courthouse, which is still in use, is an 1874 Second Empire-style architectural gem. A guided tour is a great way to explore the building. Nature lovers can visit the nearby Tallgrass Prairie National Preserve and hike along one of five trails to witness the beauty of bison and other wildlife plus an 1881 historic ranch house. 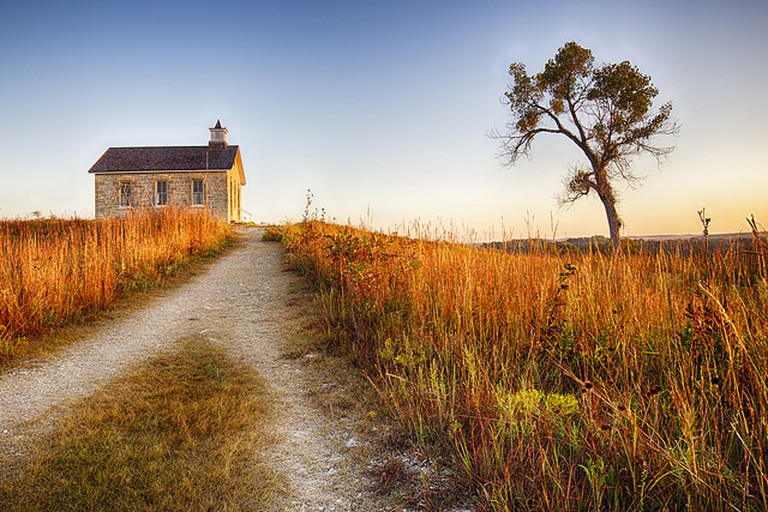 A historic town located on the Santa Fe Trail, which connected Franklin, Missouri with Santa Fe, New Mexico during the 19th century, Council Grove is a place brimming with small town charm. Guests can wander around downtown and discover unique shops and restaurants, including the historic Hays House Restaurant, which was established in 1857, or take a tour of the area’s many historic sites. Places of interest include the Kaw Mission State Historic Site and Museum, a school built in 1851 for boys of the Kaw American Indian tribe, and the Post Office, which includes a Post Office Section Art mural painted by Charles B. Rogers. 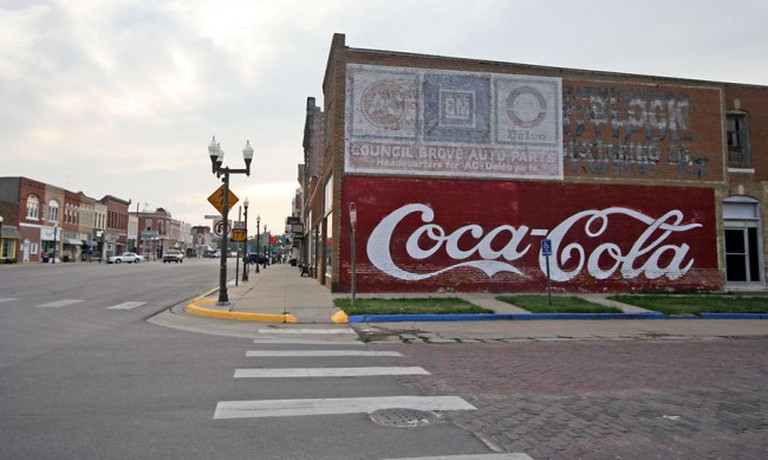 Another town on the Santa Fe Trail, Dodge City, is a history lover’s paradise. Founded in 1872, this Old Western settlement was known as ‘The Wickedest Little City in America’ during its early years due to the colorful characters that moved into the area, including cowboys, gamblers, and prostitutes. Today, the area has many adventures waiting to be discovered, including the Boot Hill Museum with its historical exhibits. Visitors can also take a trolley tour of Dodge City’s historic sites or wander around the historic downtown area to search for unique gifts and local eats.

Located on the Frontier Military Historic Byway, Fort Scott is a town steeped in history, and full of beautiful architecture. There is something for everyone, from the history buff to the outdoor enthusiast who will find plenty of adventures from water sports to hunting. The town has many places waiting to be explored. The historic downtown, complete with brick streets and original architecture filled with speciality boutiques and antiques, is a charming area perfect for taking a leisurely stroll. For more about Fort Scott’s past, the Fort Scott National Historic Site, which features 20 buildings, some original and others reconstructed, 1840s furnishings, plus several exhibitions, is a must-visit. 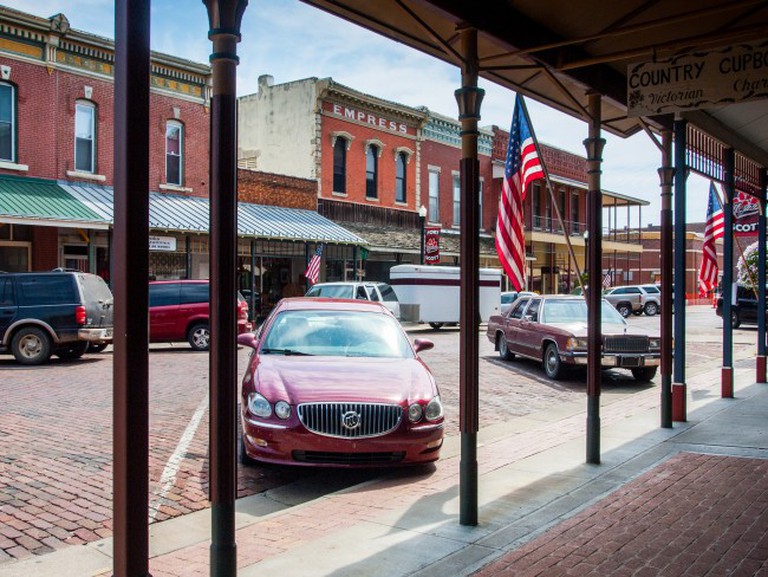 Larger than most towns listed thus far, Leavenworth is known as ‘The First City of Kansas.’ Founded in 1854, this small city features a picturesque, riverfront historic downtown where guests will find incredible architecture plus a variety of shops and delicious edibles. Fascinating sites abound as well, including the Carroll Mansion, which is a historical Victorian mansion, and the city’s premier attraction, the C.W. Parker Carousel Museum. The oldest active fort west of the Mississippi River, Fort Leavenworth, is another must-visit destination with its own historical attractions, such as the Frontier Army Museum and the National Cemetery, which is one of the first national cemeteries established by Abraham Lincoln. 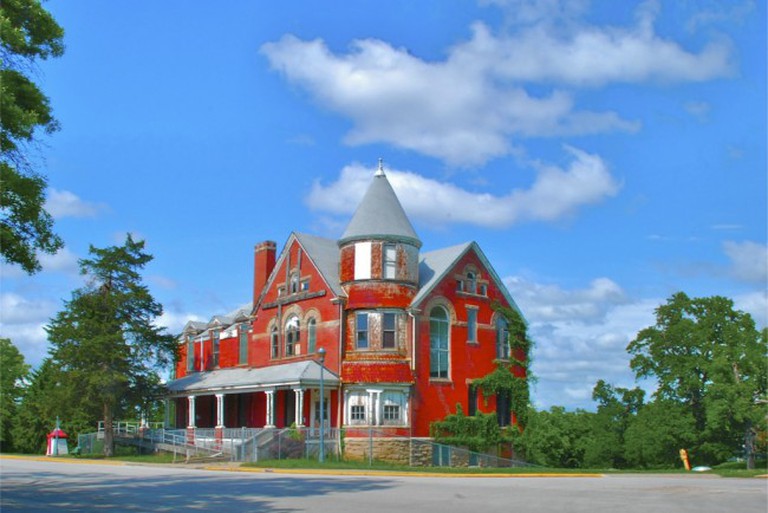 Proud of its heritage, Lindsborg is a charming community known as ‘Little Sweden USA’ due to an influx of Swedish settlers in 1869. This friendly town boasts fun adventures for the entire family. Stroll around the town to discover beautiful historic homes, which showcase many architectural styles, or visit The Old Mill Museum to learn more about Lindsborg’s history. Made up of several historical buildings, including the Swedish Pavilion from the 1904 World’s Fair in St. Louis, the museum gives visitors a closer look at the town and its people from 1870 through 1910. Many cultural events take place throughout the year as well, including the town’s signature event, the Svensk Hyllningsfest, a biennial cultural celebration. 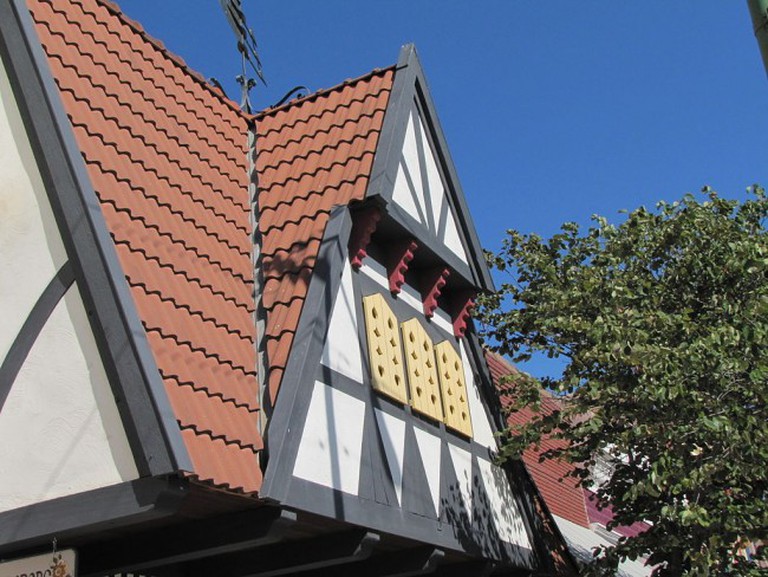 Lucas is known as the ‘Grassroots Art Capital of Kansas’. A tiny community of about 400 people, Lucas features buildings made with Post Rock limestone and colorful, fun attractions highlighting quirky art. Great places to explore include S.P. Dinsmoor’s Garden of Eden, a ‘log’ cabin made of Post Rock limestone surrounded by unique sculptures built by retired Civil War veteran S.P. Dinsmoor who began the project in 1904. Other notable places include The Grassroots Arts Center, which features folk art from area residents, and Bowl Plaza, a public restroom decorated with mosaics and named the 2nd best restroom in the USA.

‘Small Town. Big Experience’, this is Wamego‘s motto. Guests can visit the beautiful Columbian Theatre, originally built in 1895, for live entertainment, or stroll the lush 12-acre city park, the number one park in the state, featuring a Dutch Mill and the Historic Museum and Prairie Town Village. Wizard of Oz fans of any age will enjoy exploring the Oz Museum and its thousands of movie-related artifacts, while adults can sample award-winning wines with names inspired by the musical at the nearby Oz Winery tasting room.