The 10 Best Restaurants In Topeka, Kansas

Every city has a flavour all its own, and Topeka, capital of Kansas, is no exception. Visit new arts district NOTO and choose from a diverse array of restaurants, from intimate dining in a historic building to award-winning barbecue, exotic international cuisine and a multitude of Mexican places. We’ve lined up 10 top restaurants to try for a true taste of Topeka.

Greg Fox learned the restaurant business in Topeka, New York City and Nashville. After returning to his native Topeka, Fox opened RowHouse Restaurant in 2007, where the menu is ever changing. Set over three floors and the outdoor courtyard of a historic house, RowHouse Restaurant is intimate, elegant and cool. It’s the perfect location for parties of two to 12; each dining room is inviting and unique. A recent menu featured featured an appetiser of chilled strawberry soup with orange and pepper whipped cream, followed by an entrée of honey balsamic glazed beef with summer vegetable succotash and sweet tea cream pie for dessert. See the website for a list of Greg’s own favourite restaurants in Topeka and elsewhere in the US.

Bar, Pub Grub
Facebook
Email
Twitter
Pinterest
Copy link
Share
Map View
Speck’s Bar & Grill offers some great burgers including the Original Speck Burger – three pounds of ground beef on a 14-inch bun. Their buns are homemade and their fries are hand-cut. This bar and grill has been a family tradition since 1957 and is long-time Topeka tradition. The story began in 1957 when Franklin (Speck) Benge decided to get out of the concrete business. Knowing he had a growing family to feed, Speck cemented his feet in the Seabrook Tavern. He promised his wife, Lou, they would only run the place for a year, ‘till something else came along.’ Speck’s daughter, Debbie, took over the business in 1989 and renamed it Speck’s Bar & Grill in honour of her father. While you’re there, tackle the Burger Contest: eat a three-pound Speck Burger all by yourself, including all the french fries that come with it, and down it all in 45 minutes or less, and it’s free of charge. Take a look at the website for photos of past attempts!
Open In Google Maps
2105 Southwest Mission Avenue, West Southwest 3, Topeka, Kansas, 66614, USA
+17852729749
Visit Website
Give us feedback

Lonnie Q’s BBQ serves BBQ and all the sides, especially the popular and famous cheesy taters (a type of hashbrown casserole). Topekan Lon Weaver always loved to cook and knew someday he wanted to have his own restaurant. He just wasn’t sure what type. After smoking some ribs one night several years ago with a co-worker, however, he found his true passion. ‘I fell in love with barbecue that night,’ says Weaver. ‘I didn’t even know what a smoker was 15 years ago.’ With numerous popular barbecue restaurants in the area, Lonnie says the moistness of the meat is what sets his restaurant apart. The meat is smoked and tenderized for 18 hours, using charcoal and wood. The inside of Lonnie’s is decked out with a musical motif, having several pieces of artwork drawn and painted by Weaver himself. ‘It’s basically a metal building with some imagination,’ says Weaver of his place, the décor of which is dedicated to family, blues rock, motorcycles and, of course, barbecue. The restaurant slogan: ‘We smoke it and it’s legal.’ 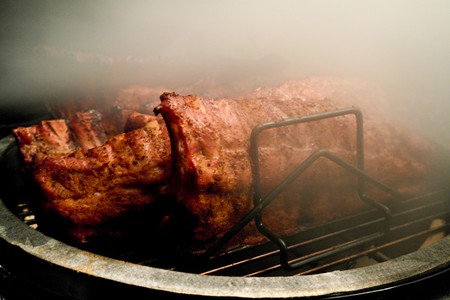 The Burger Stand at College Hill 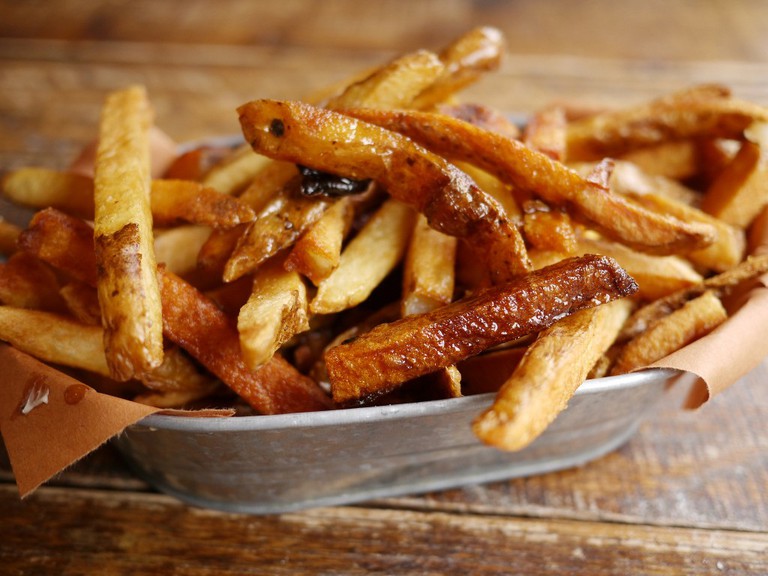 Truffle Fries | ©Abbey Swan/Flickr
The Burger Stand features unique and gourmet burgers that are made with only the freshest ingredients. Don’t forget to pair your burger with their famous truffle fries or beer-battered onion rings. Patrons can enjoy sitting out on the outdoor patio seating and order a refreshing drink from one of the two fully stocked bars — one of which, located in the back dining area, is referred to as ‘The Pong Bar’. The Pong Bar offers two ping pong tables, two pool tables, a football table, a pinball machine and digital bar gaming. The Burger Stand menu includes gourmet ‘hawt doggz’ and a large vegetarian menu.
Open In Google Maps
1601 Southwest Lane Street, Central Park, Topeka, Kansas, 66604, USA
+17857838900
Visit Website
Give us feedback 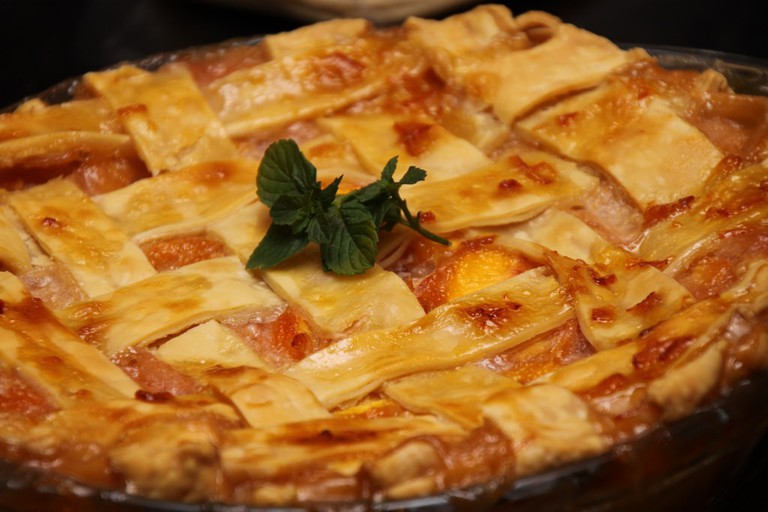 Peach Pie | ©David Vespoli/Flickr
Choose your own toppings for a delicious pizza at the College Hill Pizza Pub. With so many fresh ingredients, there are countless combinations to try. Ask a waitperson for suggestions if you need help coming up with your new favourite pizza. Every pizza is built right in front of your eyes, with over 2.7 billion topping combinations to choose from so everyone in the family can have the pizza of their choice. Follow up with a slice of dessert pizza – choose from cherry, apple, peach or blueberry. The College Hill Pizza Pub serves beer, wine, and spirits and is open till 3am every day. Beers on tap.
Open In Google Maps
1418 Southwest Lane Street, Central Park, Topeka, Kansas, 66604, USA
+17852328882
Visit Website
Give us feedback 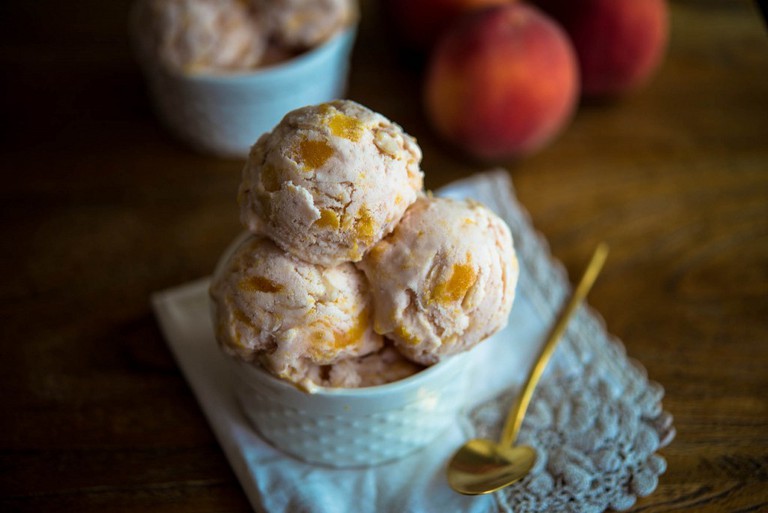 Peach & Almond Frozen Yoghurt | ©Amazing Almonds/Flickr
G’s Frozen Custard and Yoghurt serves made-fresh-daily frozen custard and yogurt. In the winter time, although they have shorter hours, they offer a lunch menu with chili, soup, and sandwiches. Frozen custard differs from ice-cream in that it has less butterfat and egg yolks are added. The popular business has been going for 21 years. Current owner Doug Colley has worked in the business since he was a kid, when the restaurant was owned by his parents, and bought it from them seven years ago. Most popular flavours are the Brown Bread, Red Velvet, Batter Up and Red, White and Blue, which is vanilla custard layered with strawberries and blueberries.
Open In Google Maps
1301 Southwest 6th Avenue, Old Town, Topeka, Kansas, 66606, USA
+17852343480
Visit Website
Give us feedback

Bobo’s Drive-In has been named one of the ‘Eight Wonders of Kansas Cuisine’, and has also been featured on the Food Network’s show Diners, Drive-ins and Dives. Bobo’s Drive-In offers delicious cheeseburgers, handmade onion rings, and homemade apple pies. There is a small area with counter or table service, but half of the customers are served by the car-hops. The current owners, Richard and Tricia Marsh, bought Bobo’s in 2007, but some of the staff have been there many years. A Topeka tradition since 1948, this classic drive-in with car hops also serves Spanish burgers, pork tenderloin, chocolate malts and much more.

Grocery Store, American
Facebook
Email
Twitter
Pinterest
Copy link
Share
Map View
A pilgrimage to CW Porubsky Grocery and Meats during chili season has been a Topeka tradition since 1947. This friendly, family-operated business is a good place to get a good meal without spending a lot of money. Charles Porubsky opened this family-run business and his son Charlie runs things now. To this day, little changes there. Porubsky’s has the same weathered bar signs and packs the same lunch crowd ranging from everyday workers to the governor. While chili season at Porubsky’s runs from September 1 through April 1, a trip to Topeka’s Little Russia is not complete without also stopping for a legendary hot pickle.
Open In Google Maps
508 Northeast Sardou Avenue, North Topeka East, Topeka, Kansas, 66608, USA
+17852345788
Give us feedback

Restaurant, American, Fast Food, Vegetarian
Facebook
Email
Twitter
Pinterest
Copy link
Share
Map View
The Pad has been a Topeka icon for 52 years. Troy Mentzer is the third generation to own the restaurant. His grandfather, Whitey, opened it in 1961 as a drive-in, with customers ordering inside and then eating their food in their cars. The restaurant’s name was originally The Launching Pad because the United States was experiencing space-travel fever at the time, which also explains the rocket logo. Through the years, the name was shortened to just The Pad. Enjoy delicious burgers, popular pork tenderloin sandwiches, other sandwiches and a salad bar. The Pad cooks at fast-food speeds with taste that tops what you’ll find at a fast-food chain. For sit-down dining, enjoy a salad bar for lunch or dinner. Then top off the meal with soft-serve ice cream or a slice of pie. For a great deal, show up between 3 and 9 p.m. on Mondays when burgers are half price.
Open In Google Maps
1730 Northwest Topeka Boulevard, North Topeka East, Topeka, Kansas, 66608, USA
+17852343596
Visit Facebook page
Give us feedback
Give us feedback