The 10 Best Restaurants in Iowa, USA

Often called ‘America’s heartland’, Iowa offers a taste of the real Midwest. Its biggest cities of Des Moines, Davenport, Cedar Rapids and Iowa City attract large numbers of tourists each year, with Iowa City being the world’s first UNESCO City of Literature. Food is big business in Iowa, with Iowan restaurants regularly featuring on TV shows such as Man v. Food and Bizarre Foods America. Below are our top 10 restaurants in the state. 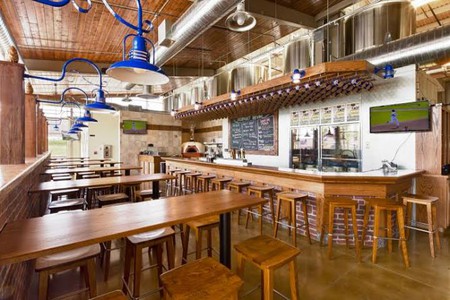 Backpocket Brewing is a microbrewery and restaurant providing Iowans with German inspired, hand crafted beer. The front of the building houses the restaurant, with a simple but comprehensive menu including soups, pies, salads, grills, flatbreads and brick oven pizzas. All of the beer on offer is brewed on site, and the highly knowledgeable staff are more than happy to give beer recommendations to accompany your meal. You can also venture outside for patio seating and enjoy sitting by the outdoor fire pit. The back of the building is home to the brewery, which runs popular tours throughout the week.

First opened in 1852, Breitbach’s Country Dining is Iowa’s oldest restaurant and bar. The great, great grandfather of the current owner bought the restaurant in 1862 and it has remained in the family ever since. Having recovered from fires in 2007 and 2008, Breitbach’s reopened in 2009 to great acclaim, with diners having travelled from across the state to support this Iowa institution. The restaurant serves traditional American breakfast, lunch and dinner and all dishes are made from scratch on the premises. Outside, there a views of the Mississippi, fields and river valleys, giving one of the finest dining vantage points in the state.

Canteen Lunch In The Alley 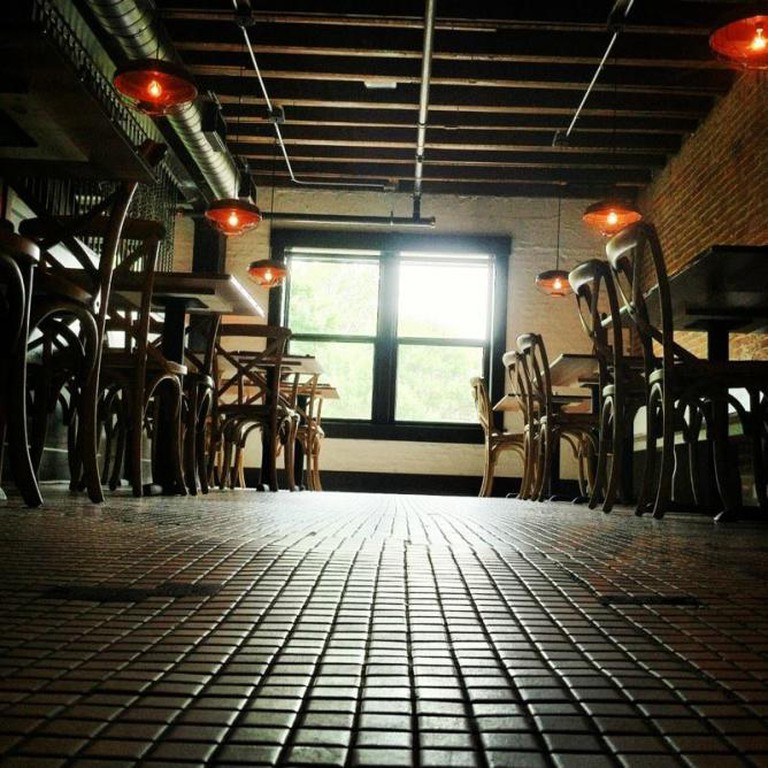 Clinton Street Social Club Interior | Courtesy of Clinton Street Social Club
A real slice of Americana, Canteen Lunch In The Alley specializes in loose meat sandwiches and homemade pies, a lunchtime favorite for the citizens of Ottumwa. The original restaurant was first opened in 1927 before moving to its current site in 1936. It is a very small restaurant, with only 16 stools for diners surrounding a horseshoe shaped counter top, and the quality of the food means that it is generally full during lunchtime. The restaurant has also gained pop culture status by being the model for the ‘Lanford Lunch Box’ restaurant in the sitcom Roseanne. 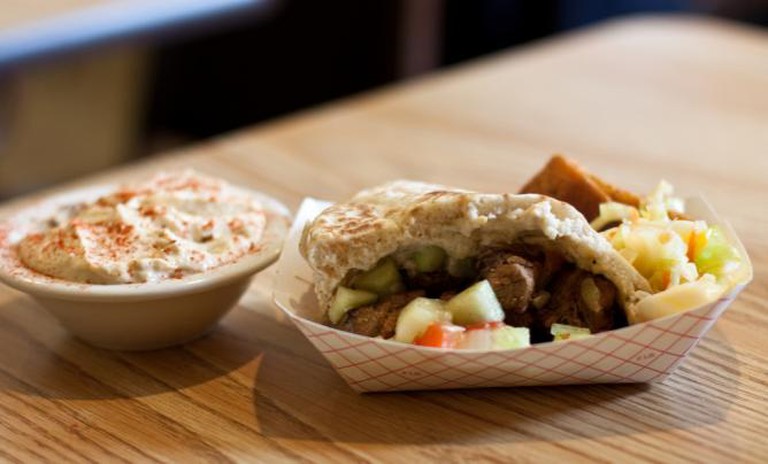 A signature dish from Oasis | © Neil Conway/Flickr
Iowa City’s one true gastropub and speakeasy, Clinton Street Social Club serves fine, locally inspired cuisine including a strong selection of sandwiches, meats and seafood. They also proudly list all of their food sources on the back of the menu, as well as interesting facts about their cooking processes and sourcing of some of the interior features of the restaurants. Did you know that the lights are made from repurposed chicken feeders? The interior décor is very much that of a traditional speakeasy, with a lauded selection of alcohol and cocktails to boot, and if you look outside, you will be able to see some of the best views of the Pentacrest in the city. 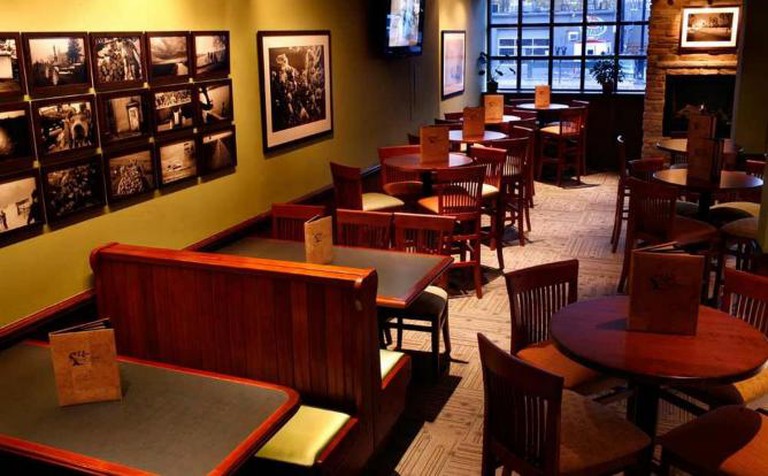 Orchard Green Restaurant and Lounge Interior | Courtesy of Orchard Green Restaurant and Lounge
Popular amongst families and business people alike, the Lucky Pig Pub & Grill has really made a name for itself since it first opened in 2011. The family run restaurant is Iowan through and through, with simple, tasty home cooking, a relaxed atmosphere and friendly service. The interior is simple but cheerful, with a selection of Americana miscellany lining the walls, booths at the side of the main dining area and a pool table at the back, as well as some ‘lucky’ pigs dotted around, all of which makes a comfortable, welcoming ambience. The pub area, with its regular events and themed nights, also proves very popular among locals.

Orchard Green Restaurant and Lounge is Iowa City’s premier fine dining destination. Typical menu items include bouillabaisse, seared sea scallops, swordfish, filet mignon, ‘cowboy’ ribeye and New York steak, with Executive Chef Bryan Herzic regularly updating the menu choices in line with the availability of fresh and seasonal ingredients. Hand picked wines and custom speciality drinks make the perfect accompaniment to meals, or to unwind with at the bar. Their two main seating areas are the upstairs dining room, with its elegant cathedral ceilings and chandeliers, and the more casual downstairs lounge. The wooden furnishings, white tablecloths and spattering of flowers throughout certainly gives Orchard Green an air of high quality, which is further enhanced by the food. 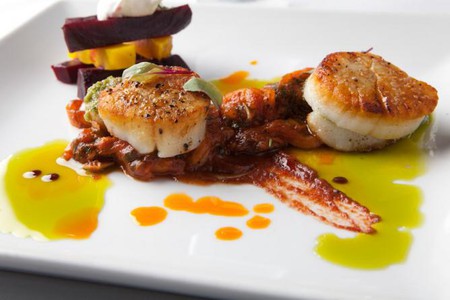 Mediterranean and North African dining in Iowa’s capital city, Proof is proof that there is more to Iowan food than Americana and eating competitions. It still acknowledges its place in Des Moines however, by using local ingredients in all its dishes. Executive chef Sean Wilson uses his South Carolina roots to inspire his Mediterranean dishes, and, as with all restaurants where ingredients are the centrepiece of their fresh dishes, the menu changes in line with seasonal availability. From fine cheeses and charcuterie samplings to complex molecular dishes, Proof offers an enviable menu in terms of both the variety of food on offer and the processes that go into their making. The interior is simple, airy and bright, making for a pleasant atmosphere which allows the food to be the star of the show. 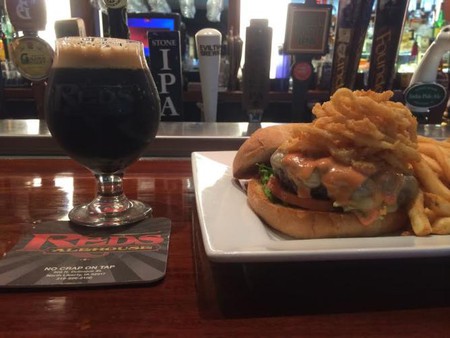 Restaurant, American, $$$
Facebook
Email
Twitter
Pinterest
Copy link
Share
With possibly the best beer selection in Iowa City, Red’s Alehouse is the perfect stop for beer lovers and connoisseurs. Launching with around 18 tap beers in 2009, Red’s has grown and developed in the past half decade to become an alehouse with a fine selection of speciality, non commercial beers. It is also a critically acclaimed restaurant, having won Best Restaurant in Iowa City in 2011 and 2013. The menu has choices for vegetarians and the meat eater alike, with a good selection of salads, meat and seafood dishes, sandwiches and flatbreads. The interior is arranged in a traditional alehouse style and outside there is a large patio area with a well kept garden which is perfect for a beer in the sunshine.

Restaurant, American, $$$
Facebook
Email
Twitter
Pinterest
Copy link
Share
Casual dining that prides itself on being the best place to eat in Anamosa, Tyler & Downings Eatery is run by the fourth generation of the Downings family, who have run various businesses in Anamosa for over 100 years. The interior gives an updated take on the historic building, while there are exposed brick walls, stained glass windows and vintage bric a brac, the furnishings and brightly painted walls gives the restaurant a fresh, modern appearance without losing the character and charm. The menu is large and has traditional American home cooking, as you may expect from a family-run business, as well as monthly special entrées inspired by world cuisine.

Zombie Burger is a fun restaurant and drink lab that is nonetheless serious about its burgers and alcoholic concoctions. Inside, canteen style and bar seating await diners, with zombie paintings adorning the walls and servers who are known to get into character. As you may have guessed, the menu has a downright impressive selection of burgers, fries and hot dogs and unlike many burger restaurants, there are also menu options for vegans and vegetarians. For the thirsty hordes, there are appetizing shakes, cocktails and bottles.