The 10 Best Brunch Spots In Iowa

Iowa is full of culinary gems, many of which offer guests breakfast and special weekend brunch menus. From Sioux City to Iowa City and everywhere in between, there are many tasty late breakfast options found throughout the state. We take a look at ten of the must-try brunches, perfect to start a relaxing day in Iowa. 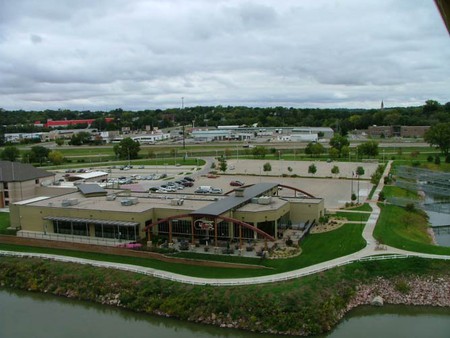 Bev's on the River

Restaurant, American, $$$
Facebook
Email
Twitter
Pinterest
Copy link
Share
Located in Sioux City along the Missouri River, Bev’s on the River is a lovely, business casual establishment offering delicious American cuisine. Open for lunch and dinner, the restaurant also features a Sunday brunch buffet from 10am to 2pm that will satisfy everyone from meat and seafood lovers to vegetarians. Within a spacious environment with ample seating in the form of tables and chairs or cozy booths, brunch lovers can feast upon a variety of items from pastries to fruit to salads. A popular place, reservations are recommended.

Cafe, Restaurant, American
Facebook
Email
Twitter
Pinterest
Copy link
Share
The Breakfast House Café is a beloved establishment located in Cedar Rapids. Family-owned for approximately 30 years, this cafe is open every day from 5:30am to 2:30pm making it a great spot for early or late risers. Offering a variety of sweet and savory homemade American entrées, the menu has something for everyone. Within an inviting, comfortable environment, guests can enjoy tasty delights such as the hearty steak ‘n shroom omelet stuffed with sirloin steak, mushrooms and hash browns topped with three cheeses and the cinnamon and brown sugar French toast stuffed with cream cheese and fruit. For the brunch crowd wanting something from the lunch side, a variety of sandwiches, soups and salads are available.

Located in Ames, The Café is a welcoming haunt giving guests a taste of the area. Inspired by the ingredients procured from local purveyors and farmers, the chefs at this restaurant create dishes using ‘old world methods,’ including casing their own sausage and grilling over a wood fire. Open daily, they offer breakfast, lunch, and dinner plus a special weekend brunch. Mouthwatering options include chai French toast, which is a baguette dipped in chai tea, eggs and cream then griddled and topped with citrus anglaise. A host of tantalizing baked goods are available as well. 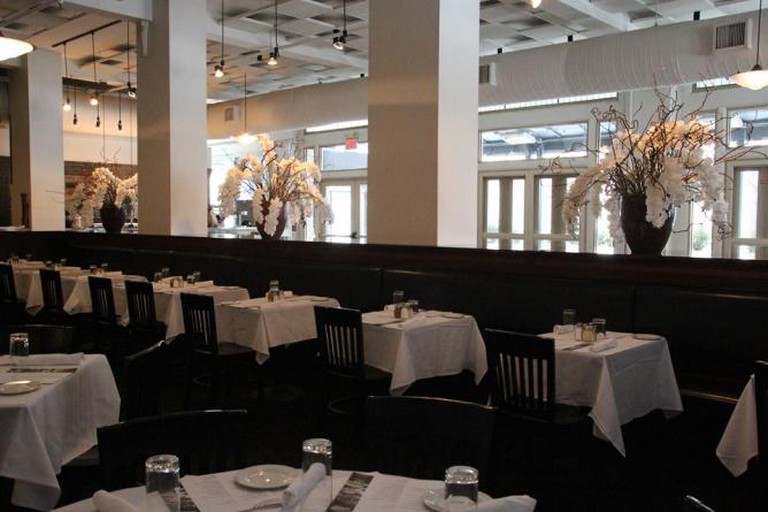 Centro | © Centro
Established in 2002, Centro is a downtown Des Moines establishment specializing in Italian-inspired cuisine. Tucked inside the Historic Masonic Temple Building, the light-filled interior is spacious with lofty ceilings and contemporary design, and the ambiance is a lively one. Using the freshest ingredients available, the culinary team create delicious lunch and dinner dishes plus weekend brunch items. The French toast stuffed with strawberries and the Italian omelet with sausage, peppers, onions, mozzarella and Parmesan are two excellent choices. To complement the meal, a special bloody Mary bar is available on the weekends as well.

First established in Omaha, Dixie Quick’s moved to nearby Council Bluffs in 2011. Featuring flavorful cuisine inspired by Cajun, Tex-Mex, and Southwest flavors, this cozy food joint, complete with art-adorned walls, is open for lunch and dinner, and hosts a very popular weekend brunch for which reservations are required. The menu changes often to reflect the best ingredients found daily, but may include enticing options such as the cactus scramble, which is cactus scrambled with eggs and served with black beans and tortillas, and the sexual chocolate (chocolate syrup, banana, nuts and whipped cream) French toast. This unique venue shares its space with the RNG Gallery, which focuses on contemporary art. 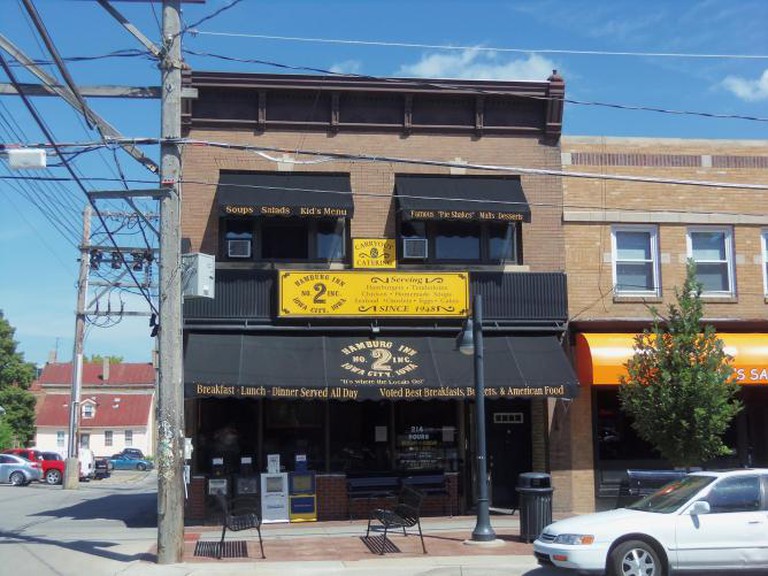 The Hamburg Inn No. 2 | WikiCommons
The Hamburg Inn No. 2 is an iconic American diner located in Iowa City. A family-owned operation since 1948, this establishment is known not only for its tasty comfort classic dishes but also as a place politicians and candidates visit while in Iowa. The Burg, as local residents call it, is open daily and serves breakfast all day. Try the house classic Iowa omelet with grilled ham, hash browns and American cheese or the sweet potato pancakes. The brunch classic eggs Benedict also makes an appearance on the menu, in traditional and vegetarian varieties, along with skillet breakfasts.

Bakery, Cafe, American, $$$
Facebook
Email
Twitter
Pinterest
Copy link
Share
Established in 2003 in Des Moines, La Mie Bakery is a friendly neighborhood bakery and cafe delighting customers with its baked goods, including French pastries and savory fare. Opened by Joe and Christina Logsdon, this establishment makes everything from scratch daily using quality ingredients. Breakfast and lunch are offered Monday through to Saturday, meaning brunch lovers don’t have to wait for the weekends to sample savory items, such as the tofu scramble and the fresh asparagus omelet with brie and crème fraîche. For those with a sweet tooth, the French toast with fresh berries, or banana, peanut butter and apple-almond oatmeal are two great options.

Cafe, Restaurant, American, $$$
Facebook
Email
Twitter
Pinterest
Copy link
Share
Named ‘Best Chef and Restaurant’ by the readers of Edible Iowa River Valley magazine, Leaf Kitchen is a charming Iowa City haunt focusing on dishes imbued with global flavors. Open for breakfast and lunch during the week, the cafe also serves brunch during the weekend. Using the best local ingredients when possible, the culinary team create a variety of sweet and savory items sure to please all guests. Highlights include the ricotta pancakes topped with caramelized organic apples, fresh berries, sour cream and almonds and the Moroccan eggs, which are two poached eggs topped with a red bell pepper sauce served with pita and hummus. Also a tearoom, the cafe has a great selection of teas to complement the meals. 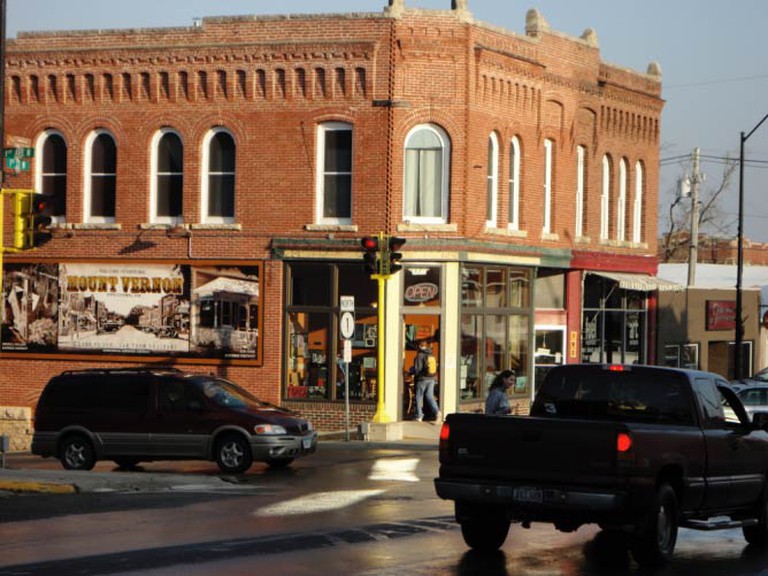 Exterior of Skillet Cafe | © stacia lynch/Flickr
A part of Waterloo’s dining scene since 1960, Morg’s Diner is a beloved institution known for its hearty breakfasts. Open daily, this classic diner, complete with red and black booths and jukeboxes at every table, is a popular place. The most famous items at Morg’s are the pancakes. Described as being bigger than the plates, guests have a variety of pancakes from which to choose, including regular, walnut, or pecan. For those diners wanting something savory, there are numerous egg dishes, such as Terry’s omelet, a massive four-egg omelet with ham, bacon, sausage, cheese, tomatoes, green peppers, onions and mushrooms.

Bakery, Cafe, American
Facebook
Email
Twitter
Pinterest
Copy link
Share
Situated on a corner in Mount Vernon, the Skillet Cafe is a casual establishment serving lunch and dinner plus breakfast all day Monday through Saturday. The warm, inviting space is a lovely place to enjoy a relaxing, leisurely brunch. Making everything to order with the freshest ingredients available, the kitchen creates an array of tasty options from savory skillet omelets to sweet treats to other breakfast entrées. Dishes to try include the veggie skillet omelet with a variety of fresh vegetables and cheddar cheese served with potatoes or fruit, and the Philly steak skillet omelet stuffed with sliced steak, mushrooms, onions, peppers and Swiss cheese. The cinna-roll French toast is one tempting option from the sweet side of the menu.
Give us feedback