The Top 10 Things To See And Do In Indianapolis, Indiana

Downtown Indianapolis I © Intiaz Rahim/Flickr
Indianapolis is the largest city in the American state of Indiana, a bustling area brimming with museums, galleries and sporting attractions. Home to the biggest cemetery in America, the largest Christmas tree in the country and the venue where Elvis played his last ever concert, this place is full of exciting and unusual places and activities just waiting to be discovered and enjoyed. Read on to find out more about the 10 best things to do and see in Indianapolis.
Downtown Indianapolis I © Intiaz Rahim/Flickr

Zoo
First opened to the public in 1964, The Indianapolis Zoo is the home to many animal species including elephants, zebras and giraffes. Interestingly, the world’s first successful artificial insemination of an African elephant took place here. The recently constructed Orang-utan Center here is being praised as one of the most significant zoo exhibits in the world, a venue which has been created to further the physical, social and intellectual abilities of the primates.
More Info
Open In Google Maps
1200 West Washington Street, Indianapolis, Indiana, 46222, USA
+13176302001
Visit website

Museum, Art Gallery
Indianapolis Museum of Art | © Serge Melki/Flickr
Visit the Indianapolis Museum of Art to behold an array of work illustrating the talent of many American and international artists. The venue is split into four sections, the Krannert Pavilion, specializing in pre-Columbian American and Asian art, the Hulman Pavilion, with Baroque and Neo-Impressionism paintings, the Clowes Pavilion, housing Medieval and Renaissance art, and the Lilly Pavilion, exhibiting British and American furniture and silver, as well as a wealth of intriguing German porcelain items.
More Info
Open In Google Maps
4000 North Michigan Road, Indianapolis, Indiana, 46208, USA
+13179231331
Visit website

The Children’s Museum Of Indianapolis

A top spot for some family bonding and educational learning, The Children’s Museum of Indianapolis houses one of the largest collections of dinosaur fossils in the world, as well as North America’s largest water clock and a majestic, working carousel. With exhibitions covering topics such as transportation and archaeology, this is both a fun and beneficial day out for kids, with costumed actors performing short sketches throughout the venue to really bring the history to life.

Wanting to escape from the hubbub of Indianapolis’ urban life” Then look no further, because White River State Park is a sprawling green space offering a bit of peace and quiet away from the bustle of the city. The aforementioned zoo forms part of the park here, and it also houses the Indiana State Museum, the Eiteljorg Museum, an Imax Theater, the NCAA Hall of Champions and the Congressional Medal of Honor Memorial. One thing’s for certain, a day spent here will offer a wide variety of things to do, and with incredible views of the Indianapolis skyline available here too, this park really should not be missed when in the city.

Indianapolis is the home of the 23rd President of the United States, Benjamin Harrison, and his house is officially a National Historic Landmark. The site boasts genuine Victorian furniture including an original cradle, and visitors can take tours every half hour to peruse various exhibits and learn about Harrison’s career in law and his expansion of the U.S Navy. Special events occur here throughout the year, including a vibrant and popular President’s Day celebration.

Originally constructed in the early 1800s to facilitate interstate commerce, although it was halted before its completion due to financial difficulties, the Central Canal now provides a pleasant waterside promenade for walkers, runners, bikers and sightseers. A beautiful three mile stretch which winds alongside the waterway, it was designated an ‘American Water Landmark’ in 1971 by the American Waterworks Association thanks to its immense historical significance.

The famous Indianapolis 500, renowned as the most celebrated car race in the United States, takes place here, at the Indianapolis Motor Speedway. This coveted site is reserved for three races only, the Indianapolis 500, the Brickyard 400 NASCAR and the Red Bull Indianapolis GP, and is thus a must-see spot for fast car lovers around the world. The track is monitored and upgraded continually to keep up with the constantly advancing technology of the industry, and the spectator area here can hold up to 400,000 people.

Lewis Hamilton at the Indianapolis Motor Speedway I © Chris Richards/Flickr

Designed by Bruno Schmitz, Germany’s leading national monument architect of 1902, the Soldiers’ and Sailors’ Monument in the center of downtown Indianapolis is an emblematic symbol of the city. It commemorates the bravery of Indiana’s military men and women in wars prior to World War I, and was built not only to remember the past, but to inspire a better future. It is also the only civil war monument of its size in the USA. Don’t miss the spectacular light show held here during every holiday season.

Bankers Life Fieldhouse is the home of the Indiana Pacers, and regularly hosts sell-out, energetic games throughout the year. This place also see rodeos, concerts, parties and ice-skating spectacles taking place within its walls. 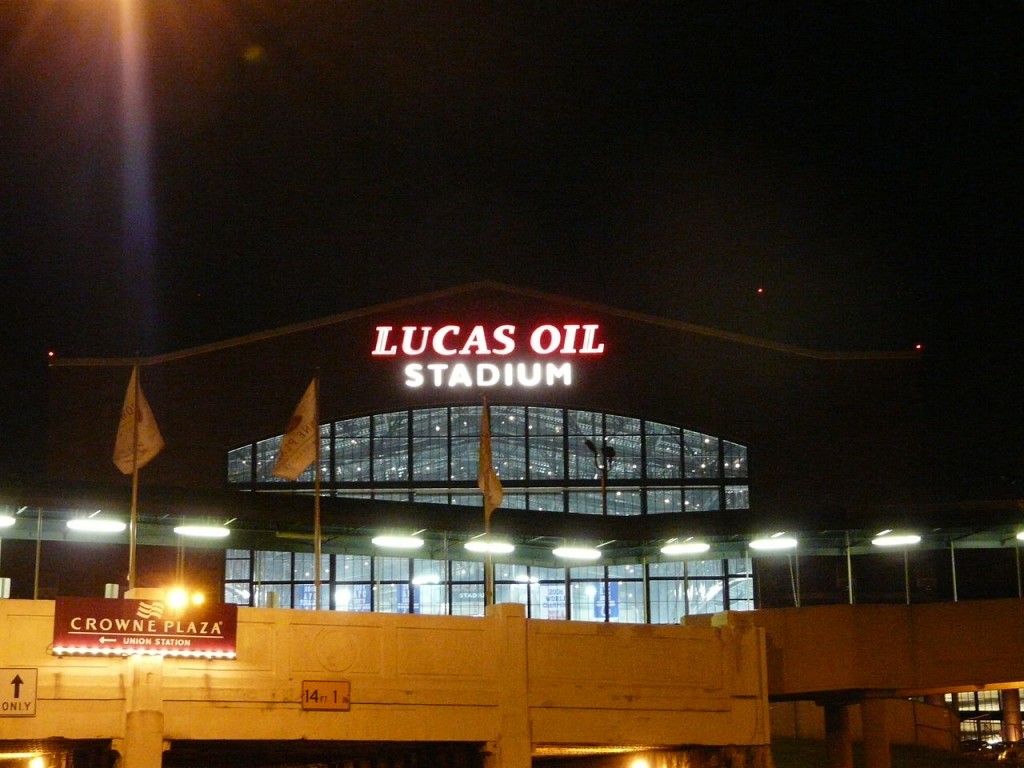