The Best Hotels to Book in Indiana 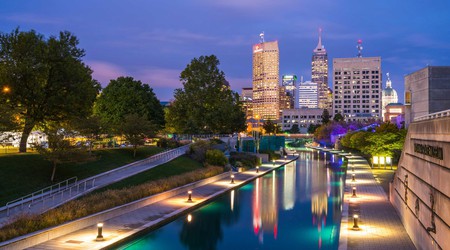 Indiana might be best known as the home of the Indianapolis 500 and the Verizon 200, but there’s more to this Midwestern state than motorsports – you’ll also find renowned museums, vibrant cities and beautiful state parks here. Whether you’re heading to Indianapolis for business or planning a romantic city break, we’ve rounded up the best hotels in Indiana – now bookable on Culture Trip. 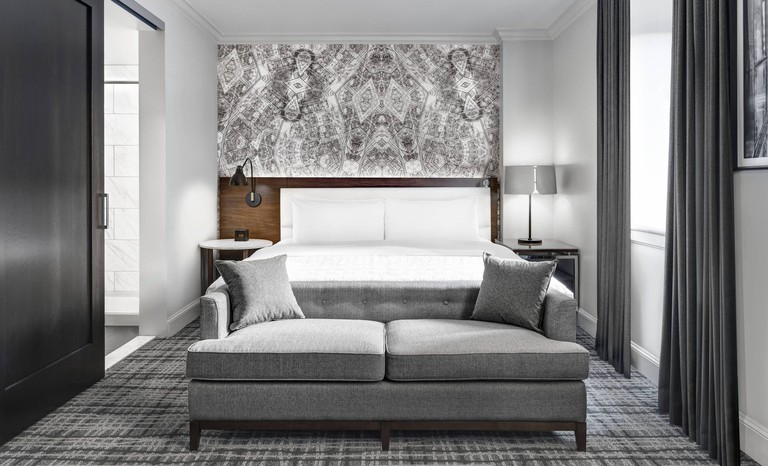 © Le Méridien Indianapolis / Expedia
Looking for a hotel near the Indiana Convention Center? The Le Méridien Indianapolis is conveniently located connected to the convention center by a sky bridge, making it ideal for business travelers or visitors in town for other events, such as Indiana Comic-Con or Indy PopCon. It’s also within easy walking distance to the Circle Centre Mall, Lucas Oil Stadium and Bankers Life Fieldhouse. The hotel itself is also set up for business travelers – with rooms and suites equipped with ergonomic workspaces and a fitness center offering cardio equipment and free weights. The Spoke and Steele restaurant is a lovely dining experience, serving up dishes like pan-seared salmon with sweet peas and pommes puree or chicken paillard with king trumpet mushrooms. 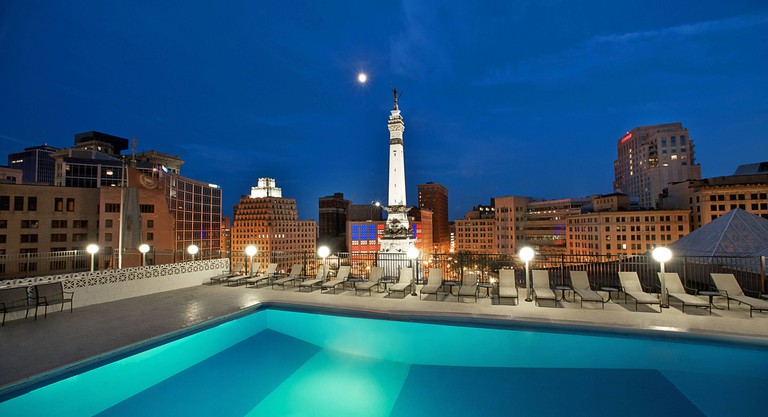 © Sheraton Indianapolis City Centre Hotel / Expedia
This contemporary hotel in downtown Indianapolis boasts a seasonal rooftop pool – the only one of its kind in the neighborhood. Rooms range from standard king rooms to rooms with views over Monument Circle – and an expansive one-bedroom suite decorated in elegant neutrals with a splash of vibrant orange. If you’re looking for an event space in Indianapolis, the hotel has 23,000sqft (2,136sqm) of recently renovated venue space – including an outdoor deck and 500-seat ballroom – that can be rented out for everything from conferences to weddings. The hotel catering team can also craft a customized menu for the event, should you need it. 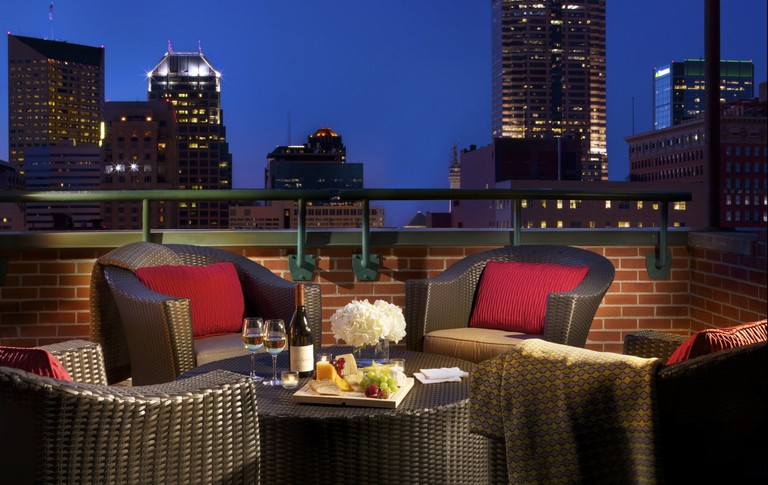 © Omni Severin Hotel / Expedia
The Omni Severin Hotel is the longest-running luxury hotel in the city and has been welcoming guests for more than 100 years. The historic building – which dates back to the early 1900s – has been restored to evoke the grandeur of a bygone era and is conveniently connected to both the Circle Centre Mall and the Indianapolis Convention Center via skywalks. The best room in the hotel is the Loft Suite, which has been designed for ultimate entertainment and relaxation. Set over two levels on the 12th floor – with a beautiful spiral staircase leading to the bedroom – it features floor-to-ceiling windows with views over downtown Indianapolis and a private balcony. 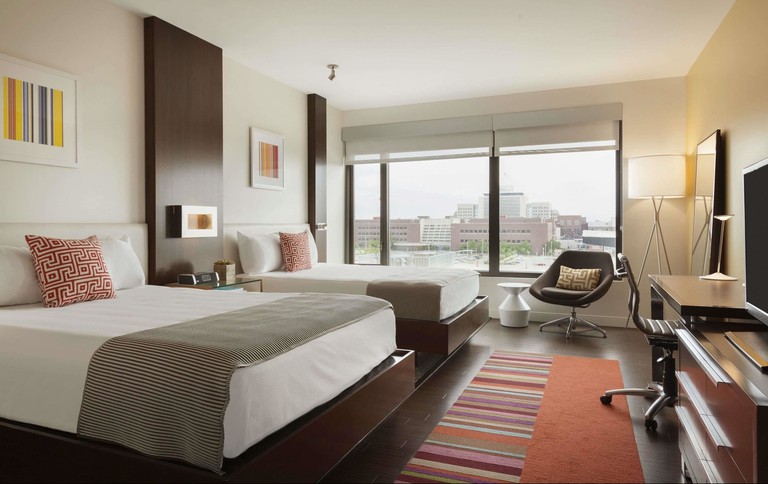 © The Alexander / Expedia
Luxurious hospitality meets contemporary art and design in this stylish boutique hotel in the CityWay area of downtown Indianapolis. The interior is designed to inspire – with a curated collection of art by local and international artists adorning the walls of every room, the lobby and the dining area – from a wall of origami birds bursting forth from a pile of magazines in the lobby to graphic text-based art in the rooms. There are 209 rooms here, including 52 extended-stay residences and suites with fully equipped kitchens. Traveling with family? Go for the two-bedroom California King Residence – which features a separate dining area, living room and two bedrooms each with its own television. 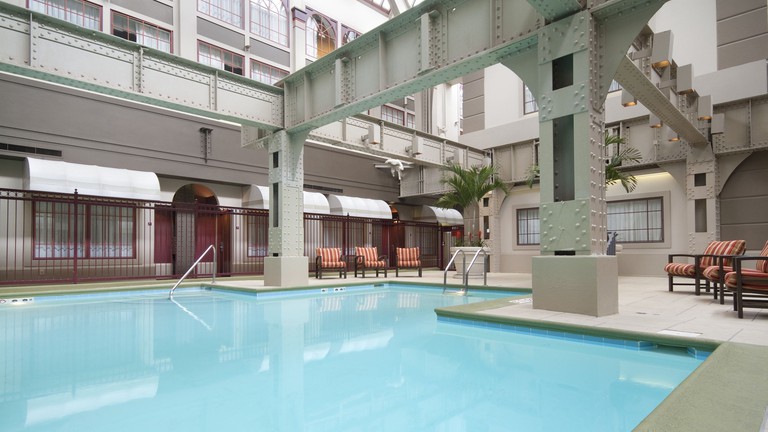 © Crowne Plaza Indianapolis Downtown/Union Station / Expedia
Housed in the historic train shed of Union Station, this destination hotel offers guests an insight into the rich history of Indianapolis. Throughout the hotel – which dates back to 1888 – ghost statues recall some of the notable figures that have passed through the station, including presidents Theodore Roosevelt, Harry Truman and Dwight D Eisenhower. For a truly unique experience, book one of the 26 Pullman train car rooms which are housed in original 1920s train cars – and named after famous individuals including Charlie Chaplin, Jean Harlow, Winston Churchill and Amelia Earhart. Hold a memorable event in the Grand Hall, which boasts two 20ft (6m) wheel windows, a 60ft (18m) barrel ceiling and more than 3,200sqft (297m) of stained glass. 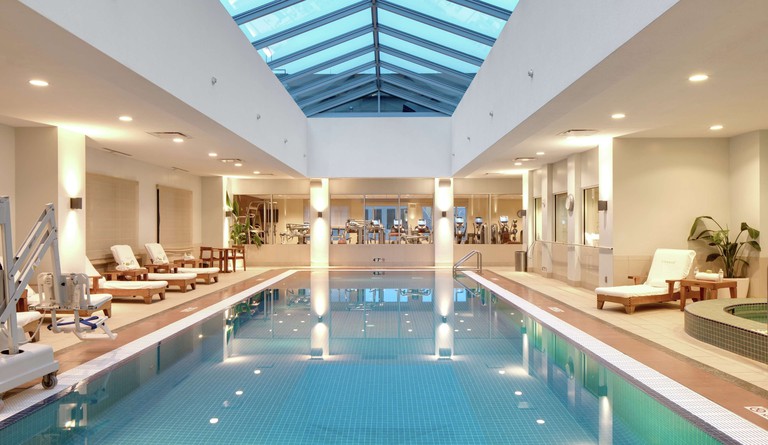 © Conrad Indianapolis / Expedia
Immerse yourself in your favorite art period at the playful Collection Suites at the Conrad Indianapolis. Each suite features curated artwork from a particular art movement – from Pop Art and Surrealism to Contemporary and Modern – alongside a collection of books that offer insights into the period. The rooms also feature custom-built butler bars and iconic designer furnishings. The Conrad Spa is another highlight, with art-inspired treatments. Go for one of the signature Masterpieces treatments – such as the Art of Celebrating, which includes a Swedish massage, aromatherapy, champagne and dark chocolates. Then, head to the Tastings Wine Bar and Bistro, which stocks over 200 bottles of wine and has one of the world’s largest selections of ‘wines-by-the-taste’. 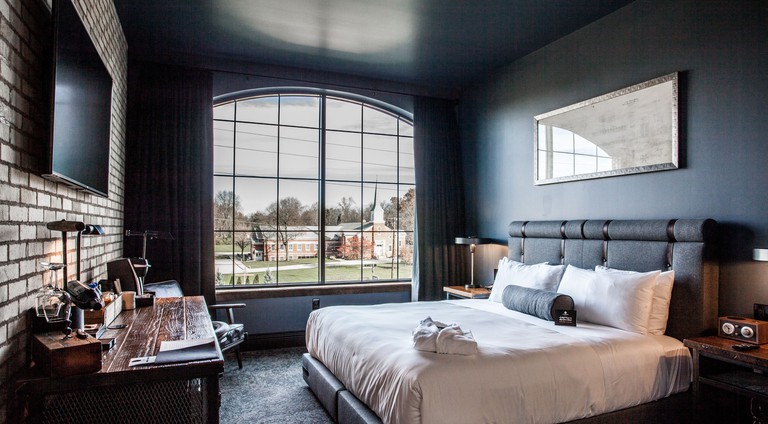 © Ironworks Hotel / Expedia
The appropriately named Ironworks Hotel is an impressive design hotel that blends 19th-century industrial design details – think reclaimed timber and crittall windows – with modern amenities. There are five different room categories: ranging from the Traditional Room with exposed brick feature walls and rustic timber desk to the expansive Founder’s Suite, which features separate bedroom and living areas and a private rooftop terrace with a fire pit, seating and integrated speakers – making it the ideal spot to wind down with a nightcap. Grab dinner at Provisions restaurant, which offers dishes such as salmon and plantain curry and an extensive steak menu. 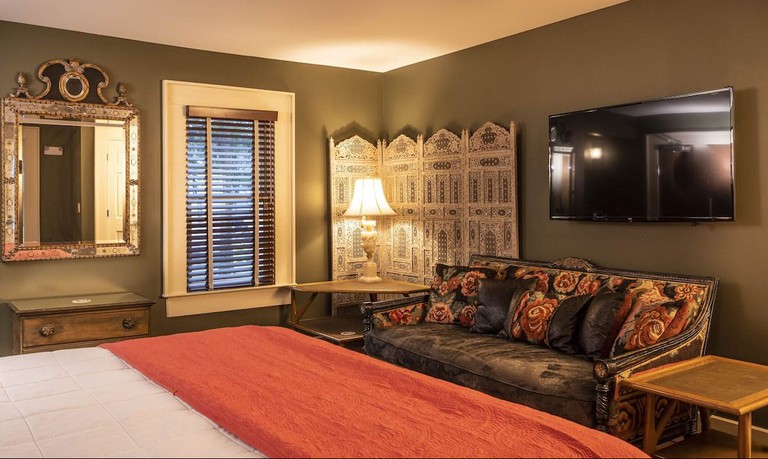 © Hotel Broad Ripple / Expedia
The Broad Ripple Village neighborhood in Indianapolis is known for its laid-back bohemian vibes, craft breweries, independent boutiques and historic live music venue, the Vogue. Hotel Broad Ripple is set right in the heart of this vibrant community. There are 19 unique rooms, including several overlooking the Monon Trail – which is popular with joggers and cyclists – and the White River. The design of the rooms ranges from industrial chic in Lodge Room 2 – with exposed brick walls and reclaimed timber furnishings – to stylish lodge-like stylings in Lodge Room 6, with acorn-motif tiles and a river rock fireplace. The cozy Bunkhouse Lounge is the perfect spot to unwind after a day spent exploring, 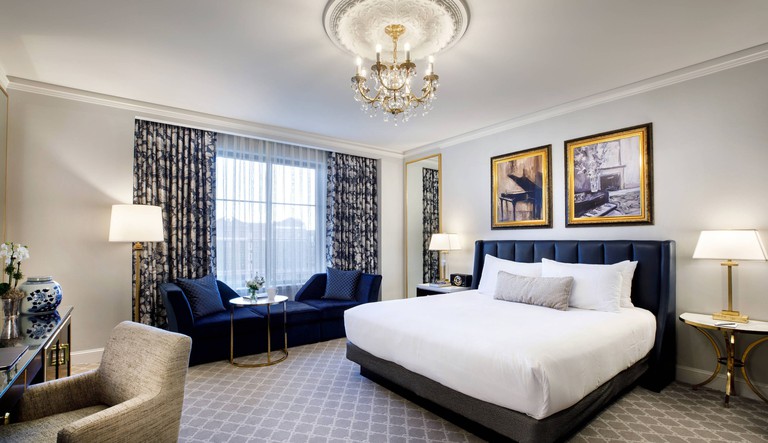 © Hotel Carmichael, Autograph Collection / Expedia
Explore Carmel’s vibrant Arts and Design District from this boutique hotel in the heart of the city center. There are 122 rooms here decorated in a classic style with luxurious details – a sophisticated palette of neutrals set off by rich navy blue textiles and sparkling chandeliers. The rooms all feature ergonomically designed workstations – making them ideal for business travelers – while the suites boast private balconies. The Centre for the Performing Arts is just a one-minute walk away and the hotel is directly next to Central Park and the historic Monon Trail. When it’s time to grab a bite to eat, head to the on-site Vivant French Eatery – which serves dishes such as chèvre fondue and stuffed rabbit saddle roasted mushrooms, saffron poached egg white and roasted beet orzo. 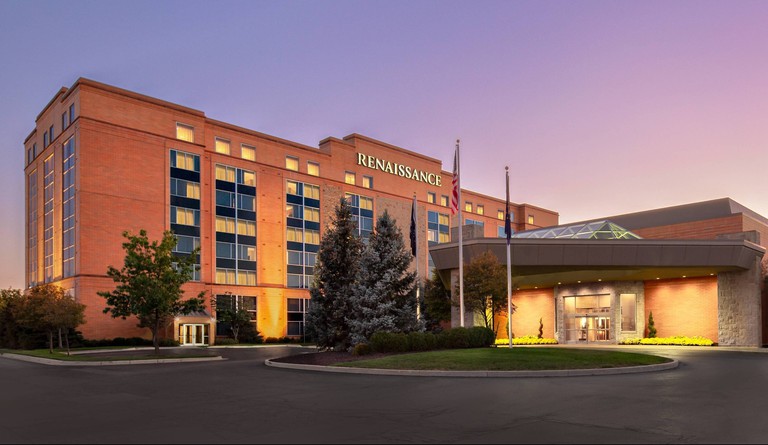 © Renaissance Indianapolis North Hotel / Expedia
With easy access to the Palladium, the Coxhall Gardens in Ritz Charles, Peace Water Winery and Indianapolis Motor Speedway, the Renaissance Indianapolis North Hotel offers serious convenience to business travelers and holidaymakers. The comfy rooms include the option of a king bed, two queen beds, or a king bed with a fold-out sofa bed – and each room features a workstation set up. Start the day with a Starbucks coffee from the Day/Night Bar, take a dip in the indoor pool, work out in the fitness center and finish up with one of the delicious signature dishes from Grille 39: think Chilean sea bass with wild mushrooms or duck with ginger plum glaze and wasabi mashed potato.
Give us feedback