How Craft Beer Is Revitalising the Bookstore Industry 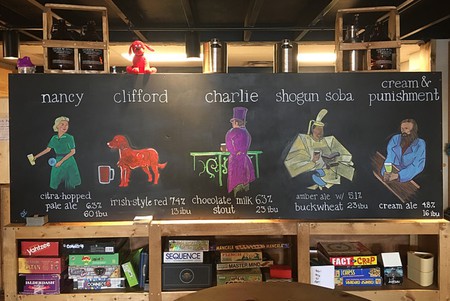 Indianapolis’ coolest brewpub might also be the geekiest. Even at one o’ clock on a Monday, patrons are nestled between stacks of used paperbacks. Laptops in tow, they sip on homemade brews like Nancy Brew and the Hoppy Boys IPA, or maybe a Clifford the Big Red Ale. Local bands play at open mic night every Thursday, though the Dungeons and Dragons players tend to congregate more randomly throughout the week.

This is Books & Brews, a dual brewpub and bookstore that is one of several similar venues across the country. These breweries are carving a specific niche into the already lucrative craft brew market. Here, where Settlers of Catan expansion packs mingle with menus featuring foodstuffs like Dante’s Inferno Grilled Cheese or Oliver Twists appetizers, it is easy to believe this place was crafted to be an introvert’s paradise.

“A lot of people here have multiple backgrounds, but they never really had a place to fit in. So they wanted a place to come fit in. Our mission statement is a place for people out of place,” Baines said. 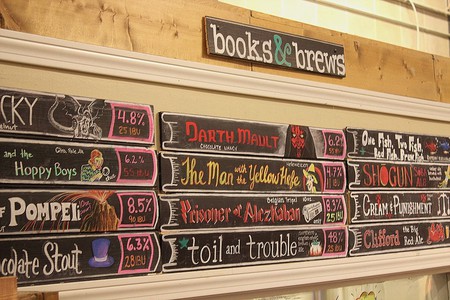 The store even supports a good cause—a portion of the profits from the books they sell goes directly to adult literacy non-profits around the Indianapolis area. “I think that at the crux of what we’re really trying to get at here, is community,” Baines says.

This quirky hub is not alone. Bookstore breweries began popping up across the country several years ago. In trendy cities with an established literary identity, bibliophiles down stouts and Shakespeare in equal measures. Spaces such as Elements: Books Coffee Beer in Maine, Prairie Lights Books in Iowa City, and Spotty Dog Books & Ale in Hudson, New York, have all drawn in beer-drinkers and book-lovers alike. The list of venues goes on, and Baines knows why.

“More people here prefer the tangibility of reading an actual book as opposed to digital. There’s something about grabbing a book off the shelf and reading it that is much cooler,” Baines says.

Harry Potter trivia nights aside, part of what makes these bookstore breweries successful is how they handle their beer, not the books. Craft beer experts say in some states, the only room left in the saturated craft beer market is for smaller breweries operating on a local scale. That means these literary breweries can continue to experience significant levels of growth because of their micro or nano brewery status. That is especially true in states like Indiana, where folks like their domestics and craft beer only makes up about six percent of beer sold.

“I think there is still plenty of growth to be had here on both the brewery side, experimentally, and the customer side… educationally in their drinking habits,” says Baines.

The balance between a burgeoning craft beer industry and dwindling bookstore industry can be tricky. In the summer of 2016, Barnes & Noble tried to lure customers away from handheld devices and into stores by offering booze at four locales across the U.S., with another set to open soon.

Live Music at Books & Brews every Friday and Saturday at all locations 8-10pm. Serving craft beer, wine, an awesome literary-themed menu, live music, board games, trivia, bingo, movie nights, retro video games, and friendly conversation since we opened the doors of our first location in 2014. With four stores open and six more in the works (across multiple states) we’re excited to bring the B&B experience to a town near you! Now franchising in 32 states! www.booksnbrews.com #booksandbrews #booksnbrews #inbeer #indianabeer #indianapolis #franchise #franchising #craftisking

Whether Books & Brews’ appeal lies in their support of local adult literacy programs, their literature-inspired beer names, or their family-friendly atmosphere, something about these bookstore breweries works. And if the goal at Books & Brews was to create a tangible space for like-minded people to hang out in peace, the evidence they reached it is found in the familiar rotation of customers walking through the door. Their success is also why the company is expanding to other states including Denver, a city where the craft beer market is more established, making up about 50% of beer sales. But Baines says he trusts the community Books & Brews created in Indianapolis will continue to flourish elsewhere.