What To See & Do Along Chicago's Pink Line Train 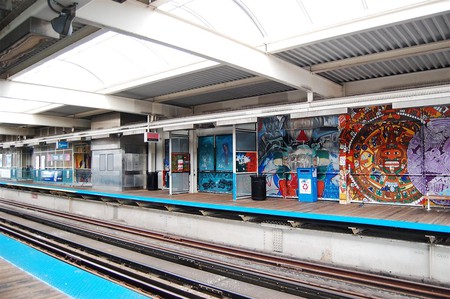 You’ve conquered the CTA’s Red, Brown and Blue lines, and now it’s time to turn your attention to one of Chicago’s smallest. The Pink Line circles the Loop and then cuts west and south through UIC and Little Village, and it has plenty to offer. Some of the best food is found along the Pink Line, so make sure you start your trip hungry.

Things to do and see

Polk is well known with students at the University of Illinois at Chicago as it lets out smack in the middle of their medical campus. Take advantage of its proximity to not only hospitals and medical centers but also world-class Italian food. It’s just a short walk from the station to Taylor Street, the epicenter of Chicago’s famous Little Italy neighborhood. Sample traditional food from Pompei, The Rosebud, and Francesca’s, and see the sights at the National Italian American Sports Hall of Fame.

Like many of the other CTA lines that run around the Loop, the Pink Line gets you close to everything downtown Chicago has to offer. With winter just around the corner, check out a performance of the newly reimagined, Chicago-centric The Nutcracker at the Auditorium Theatre. Grab a cup of hot cocoa at Park Grill in Millennium Park, and then strap on a pair of skates for a twirl around the McCormick Tribune Plaza or Maggie Daley Ice Ribbon. Or if you’re in the mood for some holiday shopping, it doesn’t get much better than seeing the festive windows at Macy’s on State Street and exploring their endless floors of retail. Don’t forget to stop and refuel at the Walnut Room.

Once you get west of the Chicago River, people don’t always know their way around. But the West Loop is packed full of amazing restaurants, nightlife, and art galleries just begging to be discovered and enjoyed by you. Try catching a little live music at the intimate, underground venue Bottom Lounge. They have a certain penchant for booking small indie acts just before they make it big (Bruno Mars played there in 2010 just months before he was nominated for seven Grammys). Also, check out Halsted Street’s bustling Greektown area and the historic Randolph Street Market on the weekends.

Visit 18th Street for a long stretch of all the Mexican food you can handle in Pilsen. Taqueria Los Comales is in the good company of several Mexican restaurants right off the stop. And it has those authentic tacos in a no-frills environment that you’ve been craving. It’s cheap, simple, and they’ve been serving everything delicious since 1973.

Don’s is a greasy hole-in-wall type of grill where the food is cheap, plentiful and often consumed after a few cocktails. But they’re open 24/7, so you don’t ever have to worry about catching them closed. Come for the tasty burgers and fries, but stay for their mouthwatering, off-the-bone ham that customers return for again and again. It’s evident that they’re a winner based on the crowded atmosphere, but luckily the service is never anything less than friendly.

If you’re looking for a classy night with live music and wine tasting, City Winery may be your spot. The company has four locations across the country, and they’re always looking to expand. It’s unique to make wine in an urban setting, and City Winery does it flawlessly. Check out the video below that explains their wine tap process, who they book for live music, and what the locations feature. Chicago has lots of wine to choose from, so select the freshest you can get.

Martin’s is a true South Side sports pub for every type of fan. They’re listed as an official Blackhawks bar that offers beer deals and commemorative cups during game days. But it’s still a great family-owned low-key bar worth a visit on any day. Check out their cheap burgers and chicken, peruse the beer list, and shoot a little stick at their free pool table.