Top 10 Things To Do and See in Chicago’s Chinatown 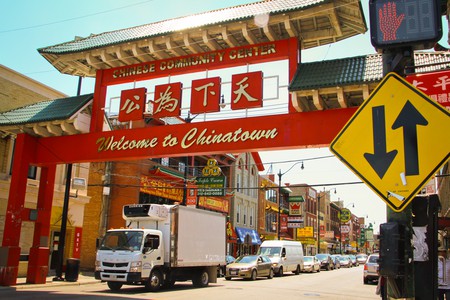 Located just off the Cermak red line stop, Chinatown, tucked away in the South-Loop of Chicago, is a small but tight-knit community, offering a lavish display of culture and art. While much of this can be said for the Chinatowns existing all across the world, from New York to France to Peru to Australia, Chicago’s representation of China and Chinese culture stands on its own, and is notable for being the second largest Chinatown in the USA.

Shopping Mall
Facebook
Email
Twitter
Pinterest
Copy link
Share
One of the largest Chinese malls in America, Chinatown Square is a two story outdoor mall consisting of a variety of shops and restaurants. Another thing to take note of is the beautiful architecture of the Square; every minute detail is clear and precise. Since opening in 1993, the Square has been a popular mainstay of the Chicago Chinatown and a perfect way to spend the day.

Building
Facebook
Email
Twitter
Pinterest
Copy link
Share
When approaching Chinatown, it’s hard to miss the giant red pillars signalling the heart, otherwise known as Old Chinatown. One thing that really stands out is the rich, surrounding history. The buildings are all beautiful in design, with walls supported by detailed street art murals and sculptures; everything seems to have its own unique story, in a way that isn’t always so apparent. 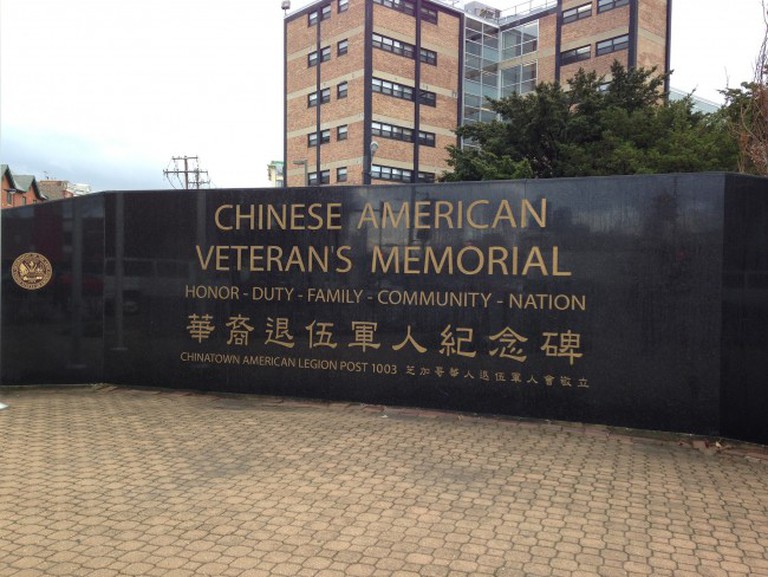 Memorial, Museum
Facebook
Email
Twitter
Pinterest
Copy link
Share
Situated on the corner of Cermak and Archer, the Chinese American Veteran’s Memorial serves as a great tribute, honoring those of Chinese descent who fought to protect the United States. Though small, this is the perfect way to pay respect to all of those veterans. For that alone, it is worth checking out. 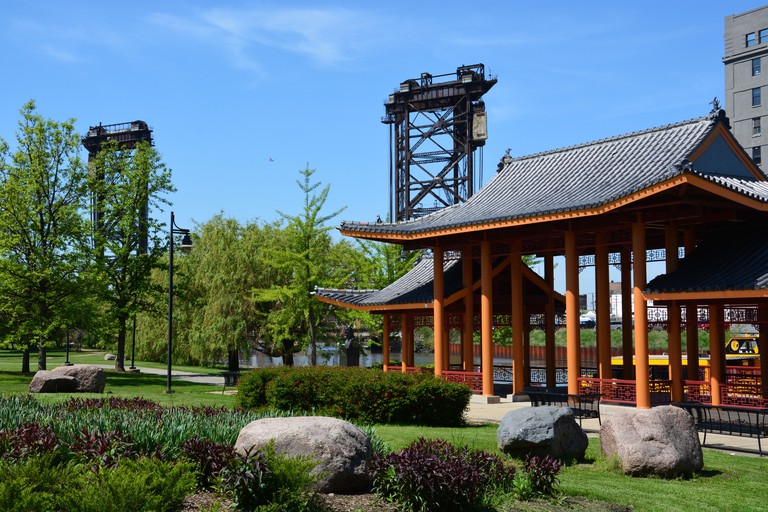 Ping Tom Memorial Park is situated along the Chicago River | © D Guest Smith / Alamy Stock Photo
Located at 1700 S Wentworth, the Ping Tom Memorial Park offers a stunning scenic display, rich in artifacts and texture representing Chinese culture, from the Ping Tom Portrait Bust to the Fieldhouse to the Boat House. There is a river with opportunities for kayaking, or just have a nice, pleasant walk. This is the perfect blend of Chicago and China that you won’t find anywhere else in the world!

Bar, North American
Facebook
Email
Twitter
Pinterest
Copy link
Share
One of the newest editions to Chinatown, PopKTV, which opened in 2014, has become Chinatown’s go-to Karaoke bar. Unlike most Karaoke bars, PopKTV allows you the one thing everybody wants when they’re singing drunken karaoke: privacy! PopKTV offers 11 private rooms at $38 an hour, each of which holds up to 15 people, so you and your friends can sing your inebriated hearts out without fear of judgment. Song stylings are available in Chinese, English, and Spanish.

Art Gallery
Facebook
Email
Twitter
Pinterest
Copy link
Share
Located in Old Chinatown, HoyPoloi Gallery has some of the most unique art, ranging from inspirational to insanely weird, from a wide array of contemporary artists. Blending just about anything imaginable, from real objects to imaginative fantasy with a splash of surrealism, there is no limit to just how far art can go in the HoyPoloi Gallery. Be prepared for a wild ride into the realm of endless creative possibilities and illusions!

Building, Church
Facebook
Email
Twitter
Pinterest
Copy link
Share
The ancient structure of the Pui Tak Center almost tells a story all its own. Pui Tak, which in Chinese means ‘to build character or cultivate virtue,’ is Chinatown’s only historical landmark, and it was purchased by the Chinese Christian Union Church in 1993. Today, the building is used mainly for youth programs (and some adult programs) based on the teachings of Jesus. The Pui Tak Center is also significant as ‘a gateway for Chinese immigrants coming to Chicago.’

With so many great places to eat in Chinatown, it’s hard to narrow down your options to just one place. At Cai, a dim sum restaurant in Chinatown, you’re seated in a room that has an elegant banquet-room vibe, complete with chandeliers hanging high above. It’s affordable, with a menu that ranges from traditional dim sum to seafood, and with all sorts of rarities that are sure to appease even the pickiest eater. At Golden Bull Restaurant, there are the more traditional Cantonese dining options. The menu is 14 pages, and each item looks equally appetizing. It’s hard to go wrong! Emperor’s Choice Restaurant is a much more intimate option, with a low-key and personal feel — a plus on overcrowded Chinatown days. Regardless of the occasion or the sophistication of your taste buds, Chinatown has something for you.

The annual The Chinese Lunar New Year Parade always serves as a great chance to celebrate the rich heritage of the Chinese culture; this year, it takes place on February 22nd. Between marching bands, floats, dragon and lion dancers, and a 100-foot dragon, the Chinese Lunar New Year Parade has just about everything you could hope for in a traditional Chinese parade. It is as authentic as you can get without actually being in China.
By Andrew Buss

Andrew Buss started writing short stories as a tyke, discovering he had a knack for weaving stories and captivating with the written word. Having graduated in 2015 from Tribeca Flashpoint College in Chicago with an Associate’s Degree in Screenwriting, writing is still a staple of his time. He has just completed his third feature screenplay, about the life and upbringing of ‘Song-and-Dance Man’ Andy Kaufman. Andrew has no intentions to cease writing anytime in the near future.