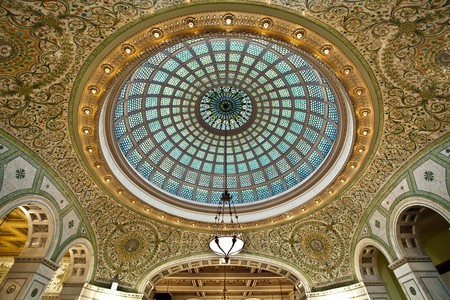 Over 30,000 pieces of glass make up the dome in Chicago's Cultural Center | © Rudy Balasko / Shutterstock

Most people today think about little blue boxes or Audrey Hepburn in a tiara when they think about Tiffany & Co. However, way before it made jewelry, the company was known around the globe for its elegant decorative glass. One of the most spectacular displays of this craftsmanship is the world’s largest Tiffany glass dome in Chicago.

A ceiling to look up to

Fabricated in bright colors and arranged into dramatic windows and lighting, Tiffany’s glasswork has often been described as paintings made out of glass. Chicago’s Tiffany glass dome is unquestionably one of the most spectacular ceilings in the Windy City—and perhaps the world. At 38 feet (11.58 meters) in diameter and 1,000 square feet (92.9 square meters) total, the colorful dome is a prominent feature of Preston Bradley Hall in the city’s Cultural Center downtown. Jacob A. Holzer, the leading mosaicist at Tiffany Glass and Decorating Company of New York in the late 1800s, designed the ceiling using roughly 30,000 individual pieces of glass. Each piece is shaped like a fish scale. 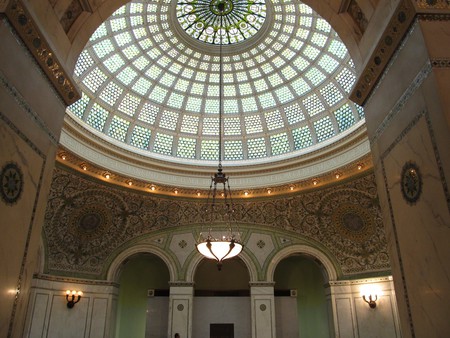 The history behind the hall

The Tiffany company used a special type of glass it had developed called Favrile, which means handmade, for projects like the dome. Visitors looking up into the highest point of the dome will see all 12 signs of the Zodiac represented. At the base, a quote from British writer Joseph Addison is written.

Originally built as part of Chicago’s first public library in 1897, the dome has since gone through major changes and renovations. In 1935, a giant exterior covering made of concrete and copper was laid on top of the dome, completely preventing sunlight from reaching the library. The dome remained in the dark for decades, even during the building’s transition into the Chicago Cultural Center in 1977.

Finally, in 2007, the City of Chicago and local design firm Wight & Company embarked on a seven-month restoration project to bring the Tiffany dome back to its original splendor. Each piece of glass was meticulously extracted, cleaned and restored off-site, before being returned to its original place in the dome. Workers removed the concrete and copper covering and replaced it with a translucent, protective exterior. This new covering reduces the need for electric lighting and increases the Cultural Center’s energy efficiency—a win-win. Today, visitors can bask in natural light under the rotunda just as Chicagoans did at the turn of the century. 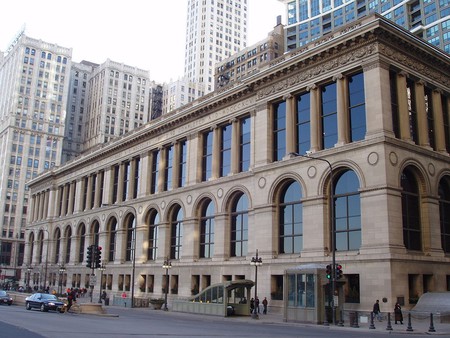 The Cultural Center offers free tours around its premises, including Preston Bradley Hall and the Tiffany Dome, Wednesday through Saturday. It also hosts hundreds of art exhibitions, dance performances, concerts and events throughout the year. Plus, another record-breaking Tiffany ceiling is on display just blocks away! Inside Macy’s on State Street, shoppers can view the world’s largest Tiffany mosaic on the building’s vaulted ceiling. With over 1.6 million individual pieces of Tiffany glass, the mosaic is jaw-dropping, certainly. But, it doesn’t offer the colorful sunlight that draws visitors to the Cultural Center’s dome—even Audrey Hepburn would have to agree with that.