The World’s Oldest Bahá’í Temple Is Just Outside Chicago 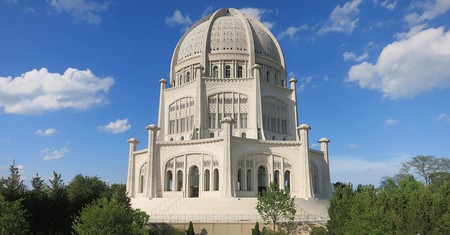 The Bahá’í House of Worship in Wilmette, Illinois, is the oldest temple of its kind in the world | Courtesy of Baha’i Temple

Built as a “gathering place for all humanity” by Canadian architect Louis Bourgeois in 1953, the Bahá’í House of Worship in Wilmette, Illinois, ranks among the most striking and unusual religious buildings in America. It also stands as a monument to the Bahá’í values of tolerance and inclusivity, and – as the oldest Bahá’í temple in the world – to the religion’s fractured, often tragic history.

In Persia in the mid-19th century, a teacher known as Bahá’u’lláh was sowing the seeds of a new religion founded on the concepts of peace, equality and the fundamental unity of humankind. The movement was known as the Bahá’í Faith, and 150 years on, it is one of the world’s fastest-growing religions with more than 5 million adherents globally. Remarkably, according to a 2010 report by the Association of Statisticians of American Religious Bodies, Bahá’ís make up the largest non-Christian group in South Carolina. In its native Iran, however, there are no Bahá’í places of worship. The faith’s oldest surviving temple is not in Tehran or Tabriz, but rather in the leafy Cook County village of Wilmette, Illinois, a stone’s throw from the shores of Lake Michigan and half an hour’s drive north of downtown Chicago. 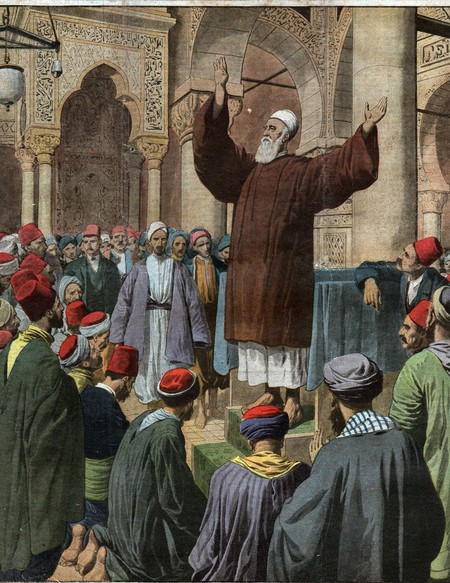 Driving through the affluent North Shore suburbs, past the Gothic spires and libraries of Northwestern University and the stately mansions of Evanston, it comes as a surprise to turn a corner and be greeted with a masterpiece of fusion architecture. The temple is a striking marriage of Renaissance, Romanesque and Islamic styles, which mirrors the Bahá’í ethos of universality and internationalism, and the young religion’s itinerant, restless history. The main temple takes the form of a nine-pointed star, a symbol of perfection and completeness. On its top sits a magnificent dome, ornately carved with arabesque-style floral patterns and enclosed by huge ribs that meet at the top, like hands folded in prayer. 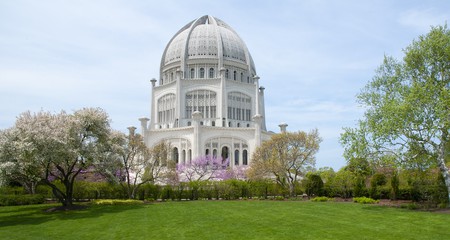 The Bahá’í House of Worship lies in Wilmette, Illinois | Courtesy of Baha’i Temple

Each one of the nine arched entranceways faces a small landscaped garden. On either side of the doorway, white pillars are adorned with carved symbols of the world’s great religions: the Islamic crescent moon and star, the Jewish Star of David, the Christian cross and the sauwastika of Hinduism, Buddhism and Native American religions. The teachings of all these traditions are deemed to be divine revelations by the Bahá’í. Above the archway, an inscription reads, “The earth is but one country, and mankind its citizens.” This temple is one of only 10 Bahá’í places of worship in the world; the others are scattered far and wide, from Uganda to Australia, Germany to Samoa, Cambodia to Colombia. 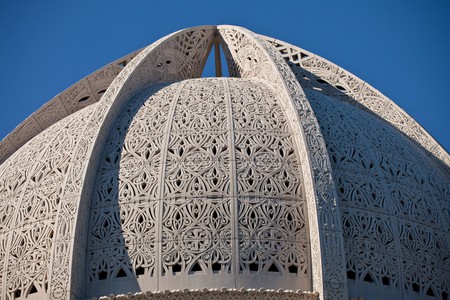 Inside the temple’s modern visitor center is Dan, a second-generation Bahá’í from Arkansas whose father converted to the faith in the 1930s. “Our moral purpose,” he explains, “is to give the gifts that God has embedded within us back, to make this a better world for our children and grandchildren. We do that by upholding certain principles; for instance, that men and women are equal. They’re like wings of a bird, and the bird is humanity, and both wings have to fly with equal strength if the bird of humanity is going to fly straight and true.” 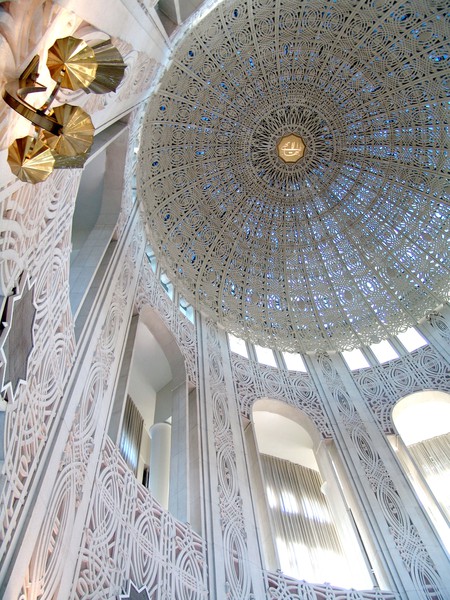 “We also believe that it’s a spiritual responsibility to root out from our hearts all forms of prejudice, whether it’s racial, religious, sexual orientation, gender; all of these are man-made barriers that prevent us from achieving our essential oneness. These barriers are not divine in origin. They are the result of human beings’ limited vision and need to feel special. One of the mechanisms people turn to is, ‘I’m OK – you’re not OK.’”

The Bahá’í belief in harmony and equality is striking in a modern world so often divided along the lines of religion, gender and race. It’s all the more poignant, though, in the context of the religion’s history, which is one of brutal and violent persecution. The temple at Wilmette is the oldest Bahá’í temple still standing in the world, dating back to 1953. The first to be built, in Turkmenistan in 1908, was demolished in 1963 after a long period of Soviet oppression against the community. Persecution of the Bahá’ís, though, can be traced back over a century earlier, and to Bahá’u’lláh’s own teacher, a former merchant from Shiraz known as the Báb (Arabic for ‘the gate’).

The Báb’s teachings deviated from the form of Shi’a Islam dominant in Persia at the time. He taught, for example, that concepts of Judgment Day, paradise and hell were symbolic rather than literal, and that women were not required to veil themselves. The Báb was deemed an apostate by Islamic authorities and was executed by firing squad in 1850 at the age of just 30. His followers were also killed in the tens of thousands in massacres at the hands of the government.

The Báb’s great writings, the Persian Bayán, contain a prophecy concerning “He whom God shall make manifest” – a forthcoming messianic figure, greater than himself, who would come to unify humankind. When Bahá’u’lláh declared that he was this foretold prophet, he himself was exiled, eventually to be imprisoned in the harbor city of Acre in modern-day Israel. His followers – by now a distinct religious group called the Bahá’í – were subjected to terrible oppression, which continues to the present day. According to the United States Commission on International Religious Freedom, Bahá’ís are arbitrarily detained in Iran, their businesses closed and their children denied access to education or expelled from universities. Amnesty International has described hundreds of Bahá’ís being executed in the 1980s following the Iranian Revolution. Persecution against Bahá’ís has also been reported in Egypt, Afghanistan, Indonesia and several other countries. 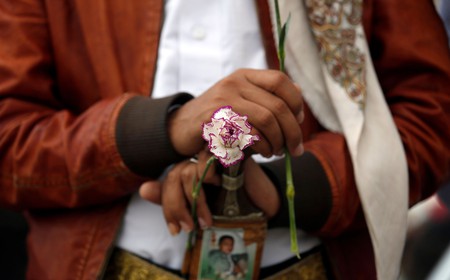 While the means and severity of the persecution have varied, the justification has remained broadly the same – that Bahá’ís are deemed to be apostates from conservative Islam, because they believe that Muhammad was not God’s final prophet. It is the Bahá’í belief that revelation is not final but rather progressive and cyclical – that Bahá’u’lláh was the latest in a prophetic line that also includes Jesus, Buddha and Muhammad, and that more will come in the future. The broader Bahá’í messages of religious tolerance, gender equality and universal education have posed further challenges to the political establishment in many countries. They jar particularly with governments like that of Iran, whose human-rights record has been widely condemned by the UN, the EU and the United States.

On the Twelfth Day of Ridván, a holy day which marks Bahá’u’lláh’s declaration that he was a messenger of God, a ceremony takes place in the temple’s spectacular main hall, presided over by the huge Renaissance-style dome. Light pours in through the detailing of the carved stone ceiling; a gilded Arabic inscription in the center of the dome spells out Bahá’, or ‘glory.’ A procession of Bahá’ís takes to the podium, alone or in pairs, to sing, chant or read passages from Bahá’u’lláh’s writings. “Consort with the followers of all religions in a spirit of friendliness and fellowship,” one of them goes. “It is not his to boast who loveth his country, but it is his who loveth the world.” 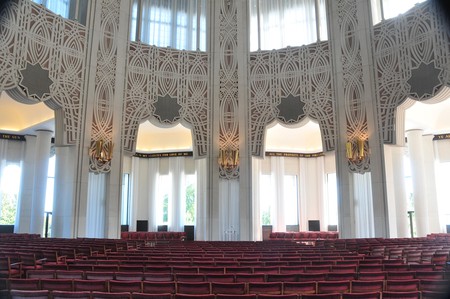 People of all faiths and none are welcome at the temple and its gardens, to meditate and reflect or learn more about the religion. The Bahá’í practice is characterized by an almost complete lack of ritual and liturgy; ceremonies are limited to a few holy days a year. In keeping with the egalitarian Bahá’í philosophy, there is no ordained priesthood, and regular practice takes the form of personal prayer and, in particular, social works in the community. Plans are afoot to build more temples, including in Vanuatu, the Congo and Papua New Guinea, among other places. However, the Bahá’í administration is informal, and gatherings can just as easily take place in private homes and community centers. It’s partly for this reason that, although Bahá’ís are persecuted in their homeland, they are growing in numbers across the world.

Bahá’ís engage with their local communities in various ways, including children’s classes and youth empowerment programs among disadvantaged groups in society. The idea is not to convert people to the faith but to create a society that has the conditions to engender virtues of harmony and compassion, regardless of religious affiliation.

“We’re not trying to make Bahá’ís,” Chris Vodden, director of the temple at Wilmette, explains. “The whole idea is to create spirituality and to bring communities together with these spiritual attributes, and so this is what we’re doing in Chicago. By teaching children these qualities of justice, truthfulness and honesty, you’re going to get this core of people growing up, developing these qualities, and they’re going to work in society bringing those along. That’s how you’re going to change the world.”