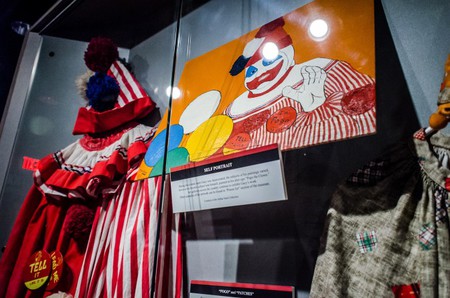 Culpable of murder and sexual assault of at least 33 boys and young men, the serial killer John Wayne Gacy, also known as the Killer Clown, is a man of modern notoriety. How should we approach the art of a murderer? 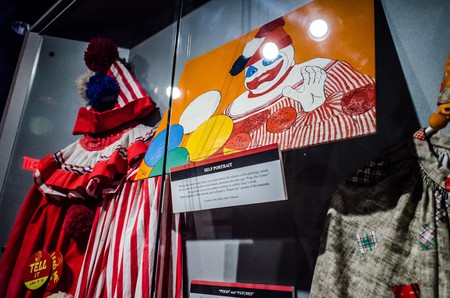 Beget from a childhood saturated in alienation, incessant paternal violence, abuse, and disapproval, Gacy’s youth was far from nurturing. In his transition to adulthood, to support himself and his family, Gacy adopted numerous positions ranging from management of a Kentucky Fried Chicken chain to proprietor of a construction business. In those years, Gacy was preyed upon by lesser tendencies, ultimately succumbing to his strong predilection toward lewd sexual fantasies, lechery, and sadism. But it wasn’t until 1980, when Gacy was formally convicted and sentenced to death, that he discovered a craving for the arts.

Generating a large collection of paintings and drawings during his stay in prison, the content of his illustrations fluctuated from depictions of political and historical figures to landscape to cartoons to clowns to satanic imagery. Looking at its aesthetic qualities and technique, Gacy’s array of work would most closely be associated with pop art; his application of primary colors and cultural symbols are prominent components. 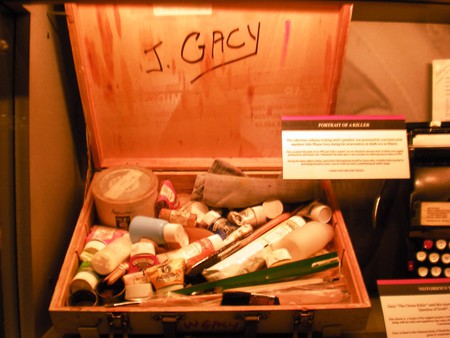 In 2011, a showing titled Multiples: The Artwork of John Wayne Gacy at the Art Factory in Las Vegas auctioned off many of Gacy’s pieces with a variety of related memorabilia to charities, on the good faith and hope that it would generate a sliver of recompense for those affected by similar tragedies. Most notable on display was Gacy’s costumed persona and self-portrait Pogo the Clown, a character he used prior to his incarceration at local charitable events and parties in Norwood Park Township, a township of Cook County where he had lived. Other displays portrayed such scenes as a group of park rangers with zoological heads, profiles of Elvis Presley and John F. Kennedy, a minimalist abstract of Adolf Hitler, a humanoid skull festooned with a blue ruff, and world-renowned clowns Felix Adler and Emmett Kelly, to name a few. 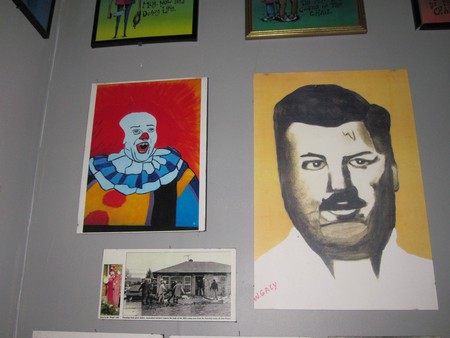 In focusing a spotlight on and deriving valuation from an artist’s infamous legacy, the controversial reception of Gacy’s artwork is evident. Following his execution in 1994, several paintings and other relics of Gacy’s were purchased and burned at a cathartic bonfire in Naperville, IL. In attendance were a few families of Gacy’s victims. The knowledge of Gacy’s death weeks before the event simulated a form of closure for many. At the art show in Las Vegas, the gallery had the National Center for Victims of Crime (NCVC) listed as a top benefactor of the proceeds. The NCVC later made a statement denouncing any involvement or connection with the event, sending a cease-and-desist letter to the gallery owner, Westly Myles. Other beneficiaries, like the Contemporary Arts Center, were reluctant to accept any of the profits, finding the the money’s origins disconcerting.

When examining a person who spent a lifetime deceiving others, to brand his disposition as fallacious is no understatement. He would lure his victims with financial reward or through false pretenses (e.g. scientific research). As a husband he was prone to infidelity, indulging in hookers, pornography, and drugs. Before admitting to his second wife that he was bisexual, Gacy sated his homosexual compulsions by what he would call ‘cruising’ for sex. When under investigation by the police for missing persons, Gacy schmoozed the detectives and pandered to their sentiments, establishing an inherently ambiguous yet cooperative relationship.

When approached by a reporter inquiring into the purpose of his artwork, Gacy replied that it was intended ‘to bring joy to people’s lives.’ He embraced his outlet in murder and sodomy, calling death during a 1980s’ interview ‘the ultimate thrill.’ It’s dubious that his hobby holds any authenticity in the art world, though it may linger as a cult creation.

Gacy’s actions, thoughts, interests, paintings, death…what do they mean? The answer is neither rational nor irrational. Only unreasonable.