The Best Hotels to Book in Naperville, Illinois 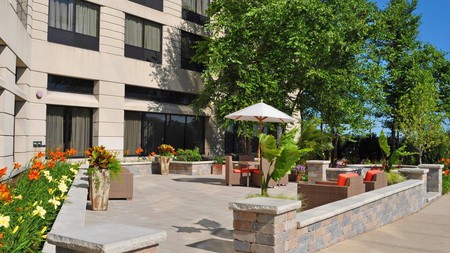 Visitors flock to Naperville for boutique shopping, cozy restaurants and fresh air. Located just over 30mi (48km) west of Chicago, the suburb balances big-city sophistication with small-town charm. Take a scenic stroll along the Riverwalk, with its fountains, bridges and swimming spots, or head to Chicago Premium Outlets or Freedom Commons for retail therapy. Whether you’re seeking a nature escape or a pared-back taste of the Windy City, be sure to stay at one of the best hotels in Naperville. 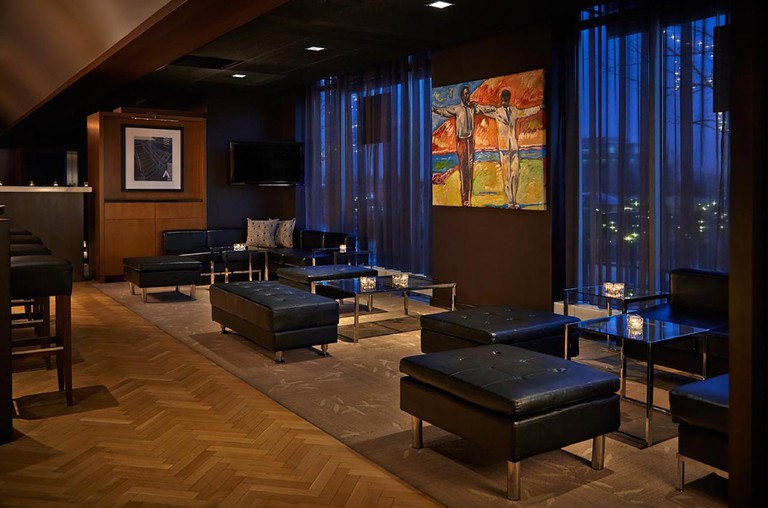 Modern luxury guides every detail at Hotel Arista, one of the most spacious hotels in Naperville. With discreet TVs built into the bathroom mirrors, you can even catch the news while soaking in the tub. For more relaxation, head to the Mediterranean-inspired Arista Spa and Salon for a stress-busting massage. A free shuttle service that operates within a 5mi (8km) radius of the hotel will get you to Downtown, with all its bars and restaurants. 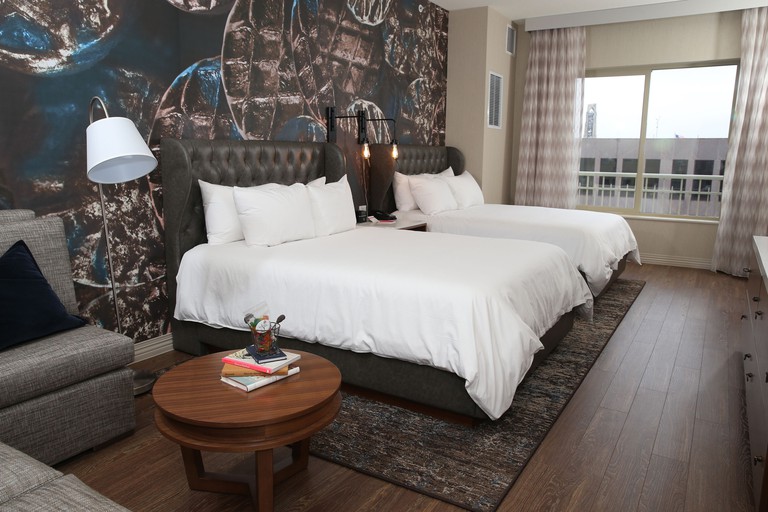 There’s an upbeat vibe at this trendy hotel, located in the center of the vibrant riverside neighborhood. Head to the rooftop bar to soak up the panoramic views while sipping a craft cocktail made with local ingredients. With local artwork and quirky vintage touches dotted throughout, the property channels the creative spirit of its surroundings and the local community. It’s pet-friendly, too, so you can bring your four-legged friend along. 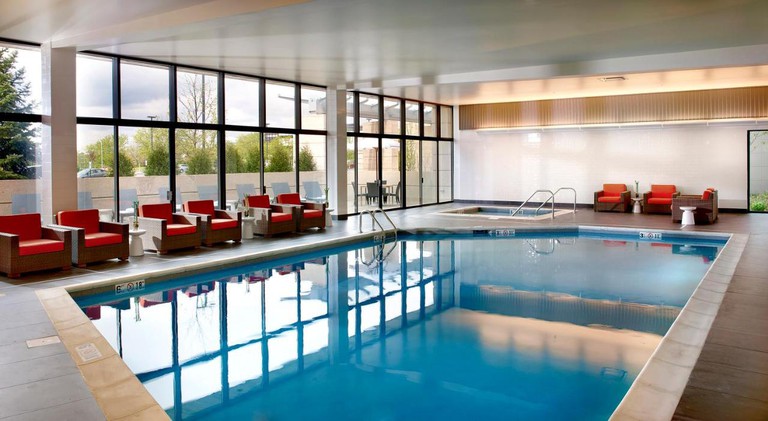 Request a corner room on one of the upper floors of this Naperville hotel for an impressive view of the sunset. With Downtown a 10-minute drive away, the city sights are within easy reach. If you feel like staying in, you can tune into Netflix or Hulu on your smart TV, take a dip in the indoor pool and whirlpool, grab Starbucks from the lobby or dig into international cuisine at the on-site restaurant, Artisan Table. 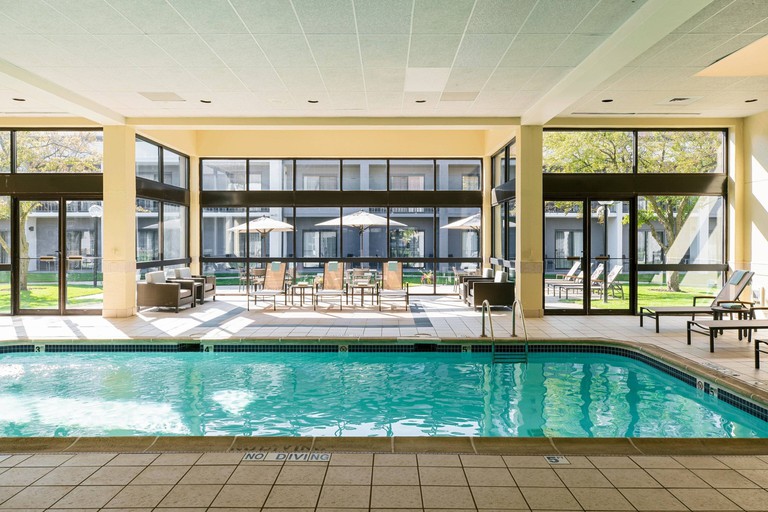 Not something you’ll find at all Naperville hotels – this stay comes with the added bonus of a free shuttle service within a 5mi (8km) radius, putting Downtown sightseeing and ​​Freedom Commons shopping at your fingertips. It also features an on-site bistro and indoor pool, so there’s plenty to keep you occupied after a long day exploring the city.

Hilton Garden Inn Naperville / Warrenville, for nature on your doorstep 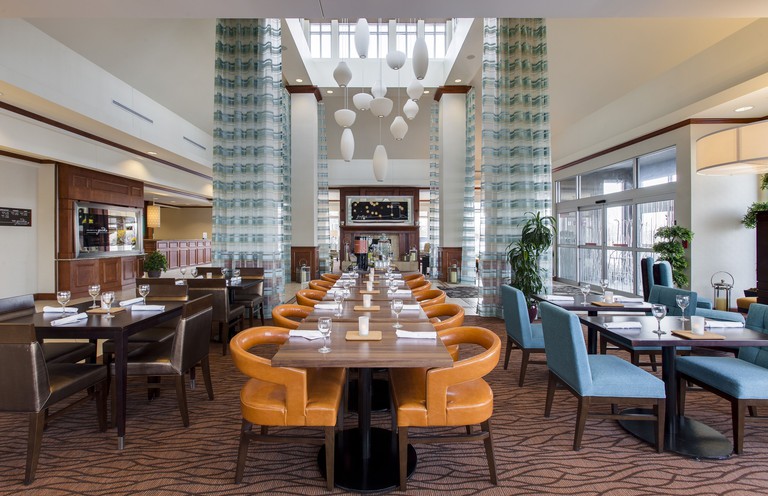 If you prefer the sounds of nature to the noise of urban living, this west Naperville hotel is close to nature reserves such as McDowell Grove and St James Farm. Before venturing into the wild, fill up on a hearty breakfast at the on-site Garden Grille and Bar, where you can also recharge with dinner and drinks when you return. If you get back too late for dinner, the 24/7 pantry in the lobby is on hand to deal with any midnight snack urges. 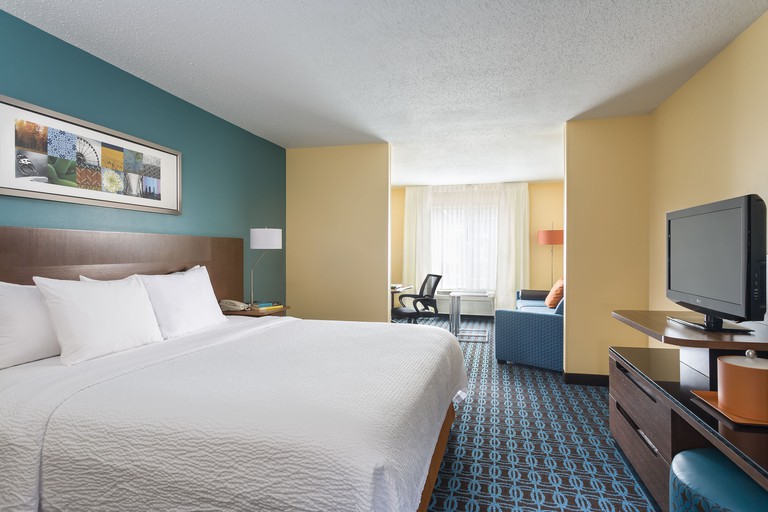 If you’ve come to Naperville to shop, you’ll love that this colorful and contemporary hotel off I-88 is less than 10 minutes away from the popular Chicago Premium Outlets. When you’ve maxed out your credit card, the nature trails and boating lake of Herrick Lake Forest Preserve are just a few minutes from the hotel, while the riverside parks and quarry lake of Downtown Naperville are just 3mi (5km) away. 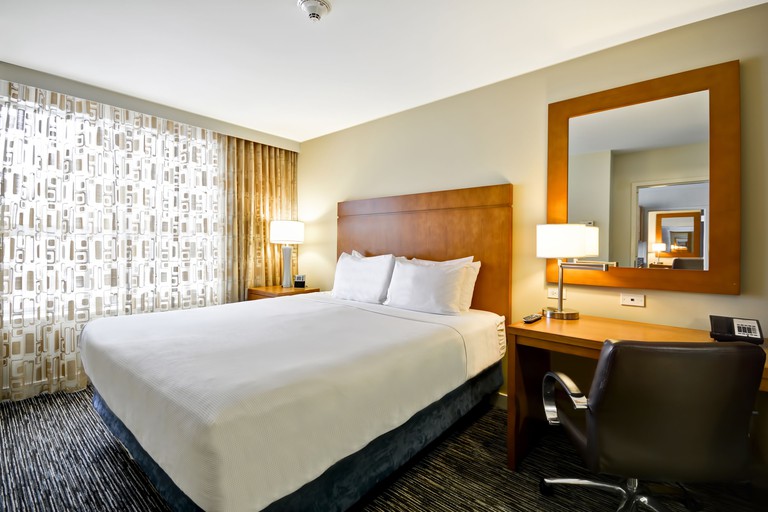 Located off the Chicago–Kansas City Expressway, 3mi (5km) north of Downtown Naperville and with free parking, this hotel is ideal if you’re driving around the area. Don’t have a car? The handy complimentary shuttle bus will take you within a 5mi (8km) radius of the property – perfect if you want to go out for dinner or browse the boutiques. When you’re done exploring, relax in the indoor pool. 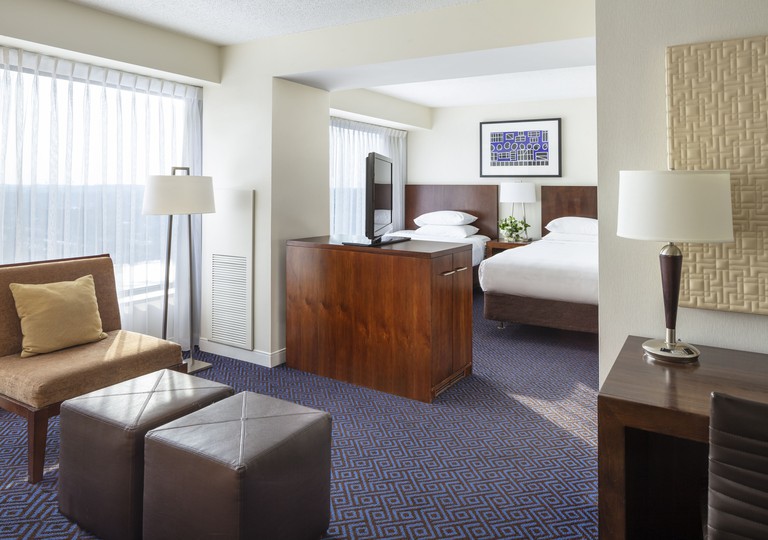 Check into a Panoramic King Room at this northeast Naperville hotel for sweeping green views of the Morton Arboretum. Despite being in the suburbs, the hotel retains a city vibe, with a welcoming sky-lit lobby atrium and a long bar where you can enjoy cocktails and live sports on TV. Though this Hyatt Regency is a 15-minute drive northeast of Downtown, that puts it a little closer to Chicago, just 26mi (42km) away.