The Best Five-Star Hotels to Book in Chicago, Illinois 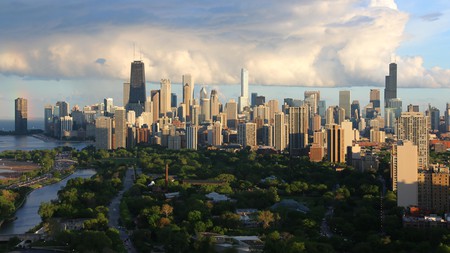 Chicago is home to many five-star hotels offering indulgent luxury, glamorous design and quality service, all bookable with Culture Trip.

The Windy City is all about modern urban living, but its historical buildings were among the first skyscrapers in the country. Staying somewhere within easy walking distance of the city and turn-of-the-century architecture is a boon, and each hotel on this list stands out for its location alone. High hospitality standards, top-notch amenities, terrific views and exclusive experiences are the cherries on top.

The Peninsula, for downtown elegance in Streeterville 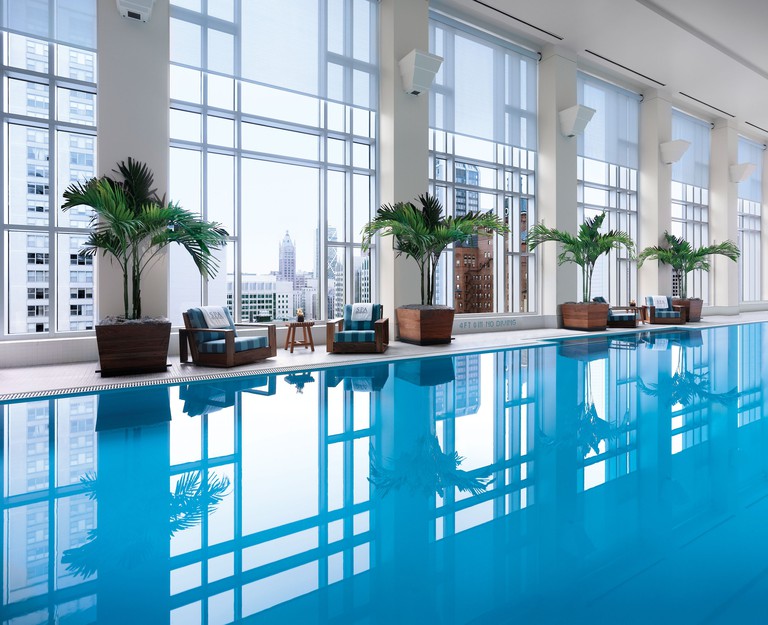 Courtesy of The Peninsula Chicago / Expedia
A three-minute walk from the Museum of Contemporary Art, and a couple of blocks off Michigan Avenue, this Chicago hotel packs a punch in every way. Swimmers will love the half-Olympic indoor pool lined with potted palms and floor-to-ceiling windows showing off the highrise cityscape. Is yoga more your thing? Get bendy in the light-filled gym. Views are a big deal here, with bathtubs tucked under windows in the cream and navy-colored suites and plenty of terraces and courtyard spaces to eat your breakfast huevos rancheros. If you need anything, you can ask a pill-box-wearing bellhop.

LondonHouse, for a stay in a Chicago landmark in New Eastside 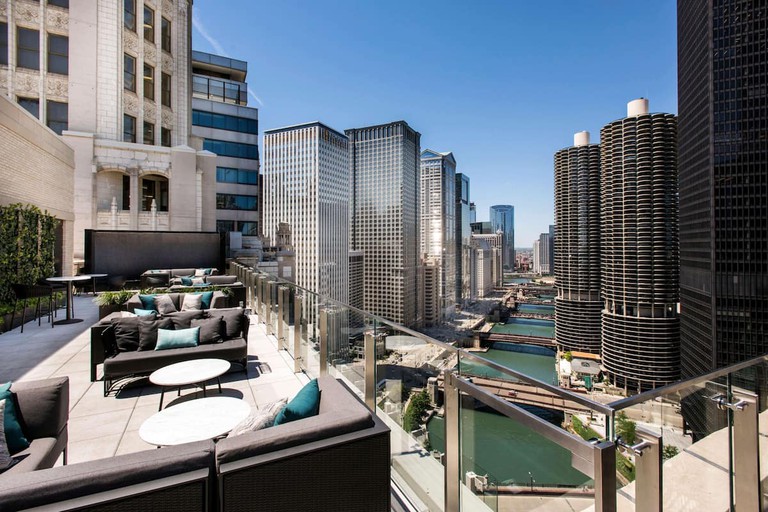 The only tri-level rooftop in Chicago is a sight to behold. Located where Fort Dearborn once stood, the building itself is a designated Chicago landmark. Roman figures are engraved into the stone facade, but the interior is fully upgraded with high design and an elegant feel. The hotel is situated on a corner of the Michigan Avenue Bridge, leading to Hubbard Street and Navy Pier. A stay in an early Chicago skyscraper will take you back in time.

The Langham, for award-winning spa treatments in River North 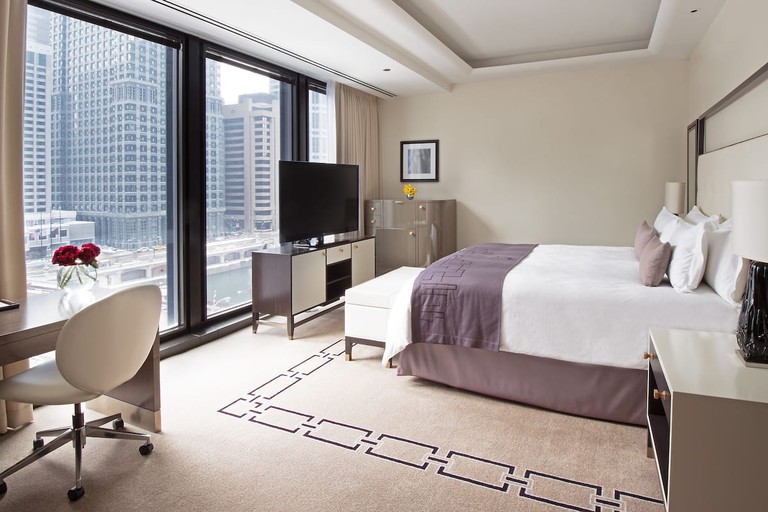 Courtesy of the Langham / Expedia
The Chicago River is experiencing a bit of a renaissance and The Langham is perched just above the action. Top critics continually rank this five-star property among the best in the country. Treat yourself to a massage at the award-winning Chuan Spa before cruising to dinner on a water taxi or dozing off in a room facing either the lake or the river – you decide.

The Hoxton, for curated neighborhood guides in Fulton Market 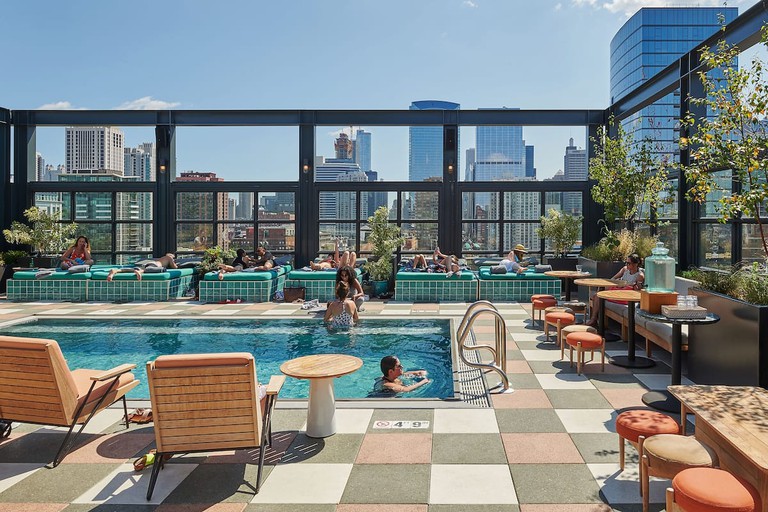 Courtesy of The Hoxton / Expedia

Playing host to a highly acclaimed restaurant from a world-renowned chef, a basement speakeasy and a rooftop bar, this hotspot in the Fulton Market district is up and coming. Rooms come in three sizes – Snug, Cozy and Roomy – and feature modern art, custom-designed bed linens, free calls to anywhere in the world and curated guides to the neighborhood. It’s the third US outpost from a celebrated London-based hospitality brand, so you know it has high standards to live up to.

Renaissance Chicago Downtown Hotel, for nights out at the theater 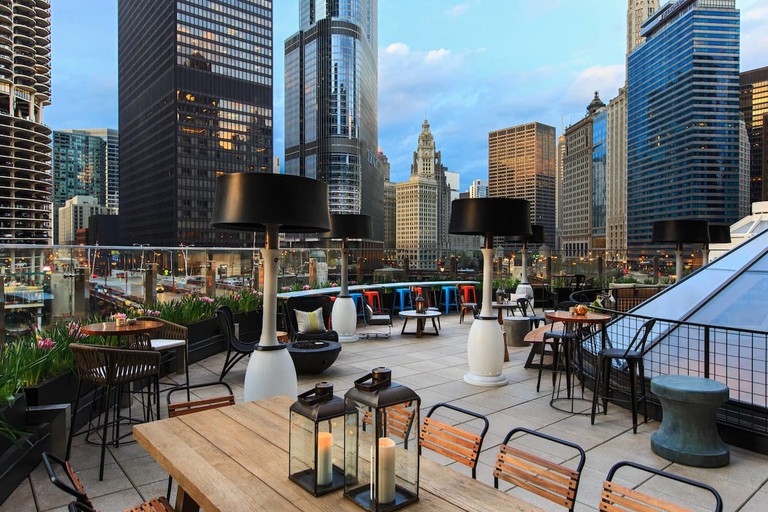 There’s just something about this stylish hotel in the Loop which feels akin to a sleek condo residence in the city. With one entrance on State Street and the other facing the river on Wacker, you get the benefit of both city and river views. The rooms are slick and sophisticated, and the indoor/outdoor rooftop lounge is a good venue for watching the sunset before catching a show in the nearby Theater District.

Waldorf Astoria Chicago, for shopping in Rush and Division 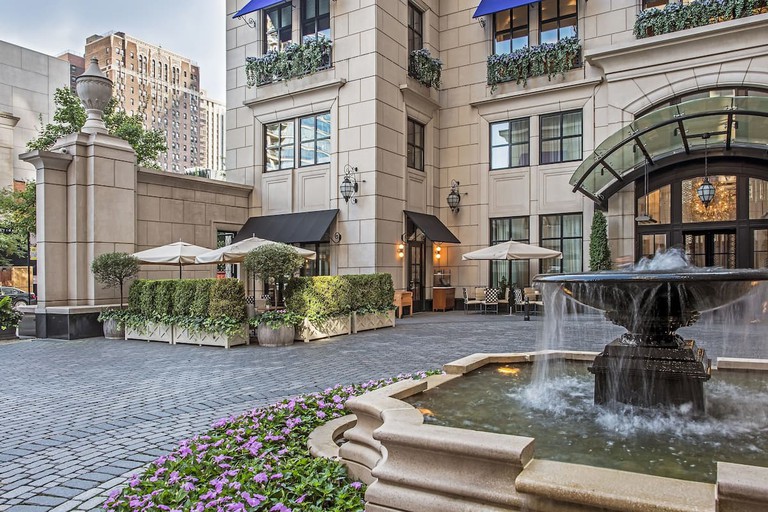 Courtesy of Waldorf Astoria Chicago / Expedia
Treat yourself to a luxurious stay at the Waldorf Astoria. The entrance terrace looks like something straight out of a storybook, dressed with strings of lights and violet awnings. The hotel is located in a prime spot in the exclusive Gold Coast neighborhood, steps from the Magnificent Mile. Relax and take in views of the city before enjoying a happy-hour martini and a swanky Italian dinner on nearby Rush Street. 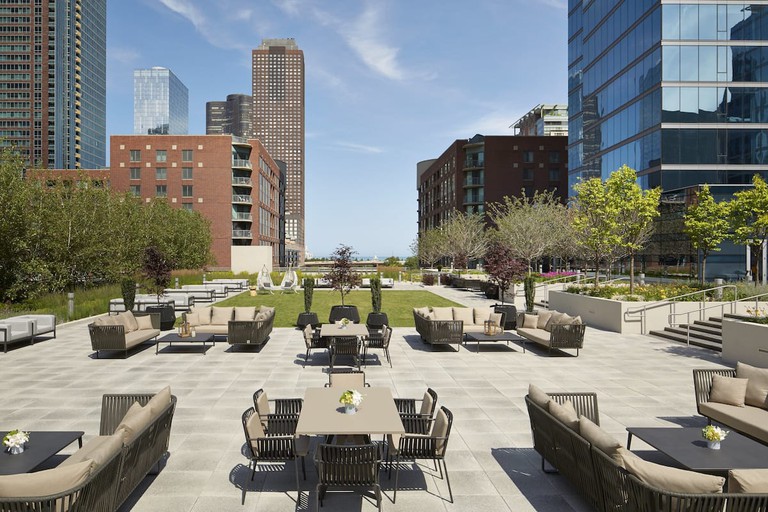 Contemporary and stylish, the Loews is surrounded by greenery and feels like a modern oasis. Its Streeterville location makes the 52-floor hotel ideal if you’re looking to make the most of your city break. Peer out at the Navy Pier Centennial Wheel or take a short walk to Ohio Street Beach. Its design was influenced by Chicago architects Ludwig Mies van der Rohe and Louis Sullivan, the tower is all clean lines, its rooms are flooded with plenty of natural light. 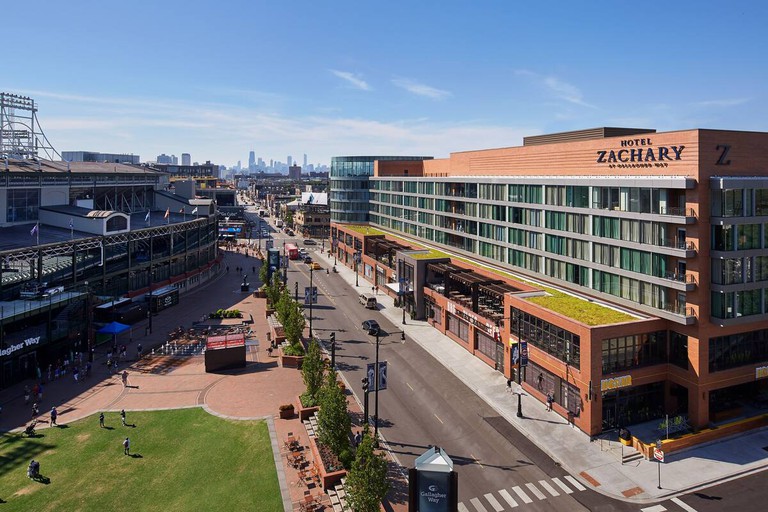 Cubs fans, look no further: Hotel Zachary is your spot. Wake up in a handsomely designed suite adorned with vintage photographs and rare Wrigley Field memorabilia directly across from the stadium. Surrounded by both modern and lively sports bars, the hotel is perfectly located for going out to a ballgame at the historic stadium. If you’re a night owl, exploring the nightlife in Wrigleyville is the perfect way to spend a weekend.

Four Seasons Hotel Chicago, for a private library in Streeterville 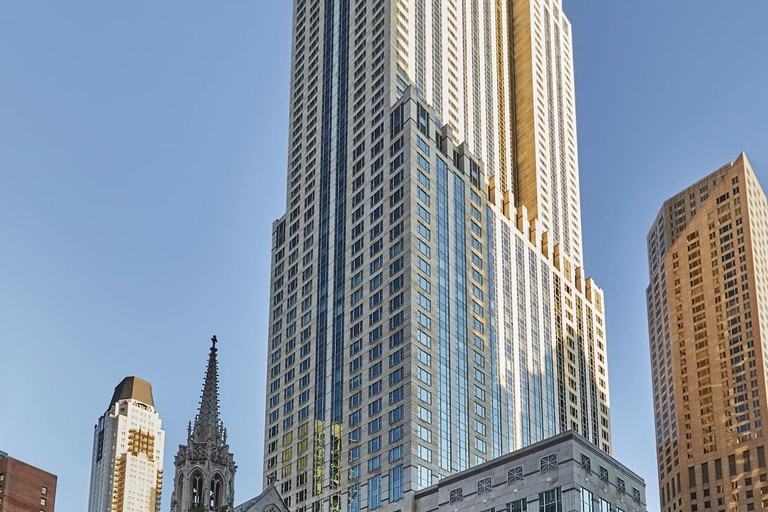 Courtesy of Four Seasons Hotel Chicago / Expedia
The Four Seasons Hotel Chicago rises from a shopping mall in the heart of the historic Gold Coast district. Enter through a glossy marble lobby, relax in rooms with views of Lake Michigan and swim beneath the domed skylights of the Roman-style pool. The Author Suite encourages you to lose yourself in the pages of the private literary collection – featuring personalized editions from the likes of horror wordsmith Stephen King and gothic fiction author Anne Rice – while evenings are best spent sipping the prohibition-era-style libations served up in the lobby bar.

The Ritz-Carlton Chicago, for stylish rooms in Streeterville 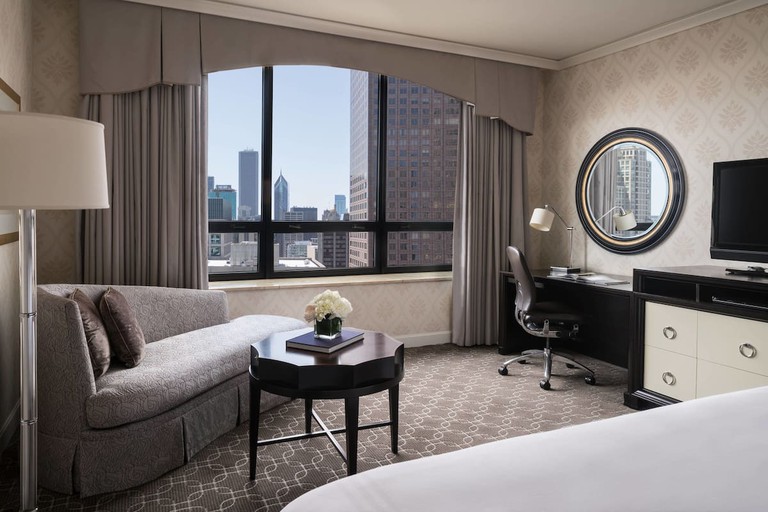 Courtesy of The Ritz-Carlton Chicago / Expedia
The Ritz-Carlton Chicago is as elegant as you would expect. The apartment-style rooms are dressed in blue and grey tones with golden accents, with ornamental driftwood furnishings. Each includes a marble bathroom with a deep soaking tub and Asprey toiletries alongside a fully-equipped kitchen. Once you’ve taken in the far-reaching views of Lake Michigan, head down to the spa for a hot river stone massage. In the morning, pull up a seat at the atrium-style cafe for fresh-pressed juices and spend your evening at the 12th-floor steakhouse Torali, sampling the dry-aged meats.

Sofitel Chicago Magnificent Mile, for shopping in North Side 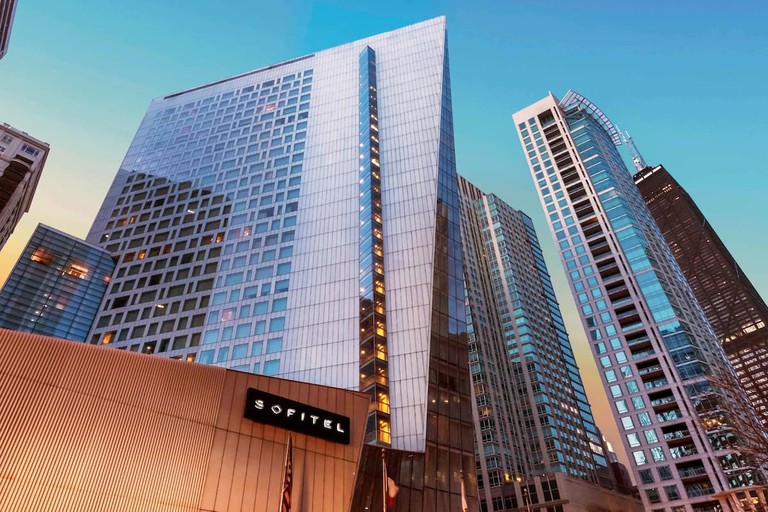 Courtesy of Sofitel Chicago Magnificent Mile / Expedia
Inspired by the French-coined art de vivre (art of living), Sofitel Chicago offers luxury with a playful twist. The hotel is steps away from the Magnificent Mile and its parade of deluxe stores, so you can spend the day shopping before unwinding in modern rooms with beechwood walls, Bose Bluetooth speakers and 55-inch TVs. Meet friends on the teddy bear-reminiscent sofas of the lobby (made up of honey-colored velvet with tartan cushions) and pull up a lime-green stool in Le Bar for Moscow Mule cocktails and macarons.

Conrad Chicago, for a seasonal rooftop restaurant in River North 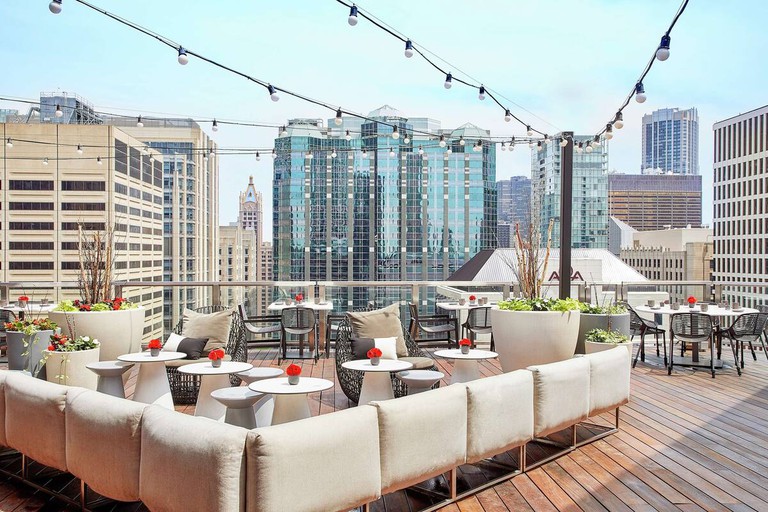 Courtesy of Conrad Chicago / Expedia
The Conrad Chicago envelops you in its warm palette of fiery-orange velvets, tobacco leathers and bronze-toned carpets. The theme extends to the Baptiste & Bottle bar, which serves throat-warming, barrel-aged bourbon and cocktails, such as the dark rum-infused Old Cuban. The mid-century-modern rooms are decorated with abstract art and treat you to eye-popping city views and Nespresso coffee machines. In the warmer seasons, cool off with Spiked Snowballs – a shaved ice delicacy drenched in booze such as dragon fruit strawberry rum – at Novane, the seasonal rooftop restaurant.

For more perfectly located stays, check into one of the best hotels in the Loop in Chicago – bookable now on Culture Trip.