The Best Historic Hotels to Book in Chicago, Illinois 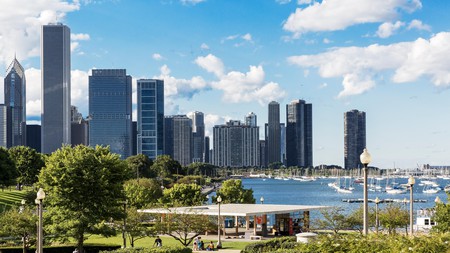 Chicago is known for its historic buildings and grand architecture. Stay in one of Chicago’s most lavish historic hotels, many of which date back to the 1920s and have seen hordes of famous guests pass through their doors.

Chicago is known for its bold architecture, be it soaring skyscrapers or art deco buildings dating back to the 1920s. Many of these buildings serve as hotels that ooze history, with star locations near the Magnificent Mile, opulent decor and a reputation for hosting the rich and famous. If you want a taste of old-school Chicago, stay in one of these top historic hotels. 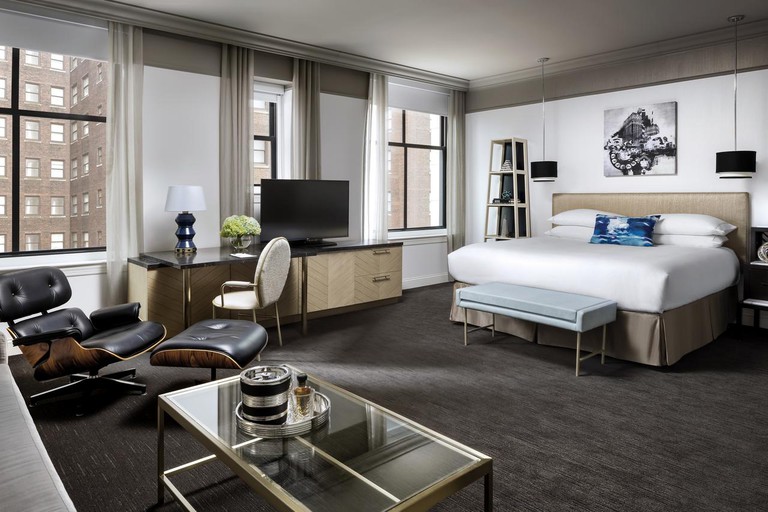 Courtesy of the Blackstone / Booking.com
When it opened in 1910, the Blackstone was Chicago’s tallest building and it towered over prestigious Michigan Avenue. The French beaux arts architecture attracted movie stars and presidents, who enjoyed views of Lake Michigan and Grant Park from lavish rooms and penthouse suites. Today, the Blackstone has been extensively refurbished, but it retains its period touches, as well as incorporating modern features such as a fitness center and tapas restaurant. 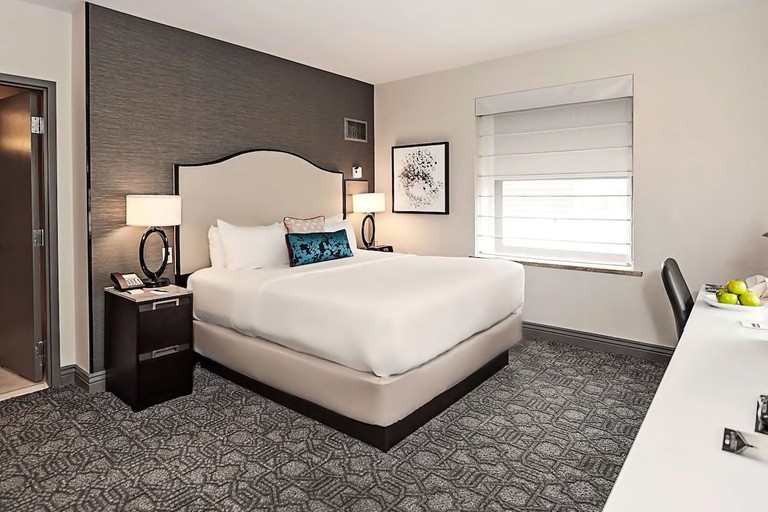 Courtesy of InterContinental Chicago Magnificent Mile / Expedia
The InterContinental’s decadent past is apparent from the moment you step inside the marble lobby with its sweeping staircase. Built in 1929 for the exclusive Medinah Athletic Club, the 41-story hotel exudes extravagance, with cast-bronze friezes and a ballroom with a crystal chandelier. Rooms have received a substantial update and there’s now a spa, three-level gym and junior Olympic pool complete with Neptune fountain. There’s also a wine bar and Starbucks on-site, and don’t miss NBA icon Michael Jordan’s Steak House. 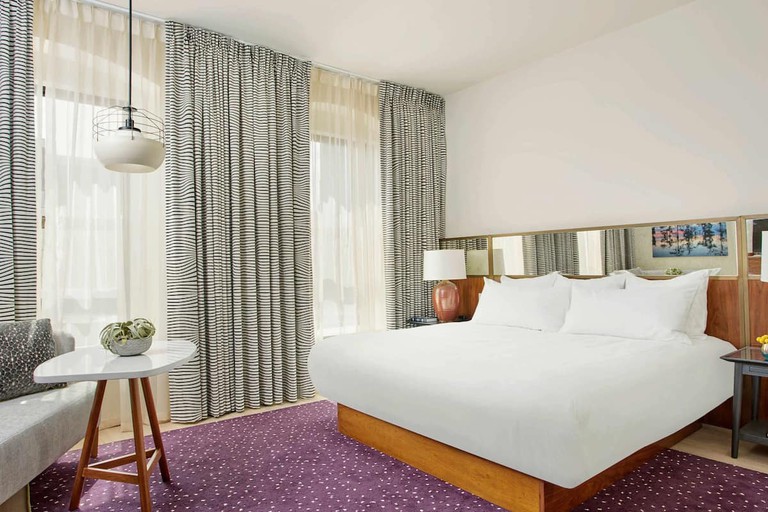 Courtesy of 21c Museum Hotel Chicago / Expedia
As part of the boutique MGallery collection, Chicago’s 21c Museum Hotel is filled with history and art. Set on Michigan Avenue, the building was once the historic Croydon Hotel, a hang-out for vaudeville actors in the 1930s. 21c is now home to bright rooms and suites with sky-themed palettes as well as galleries showcasing work from local Chicago artists. Guests can also enjoy a spa and fitness center. 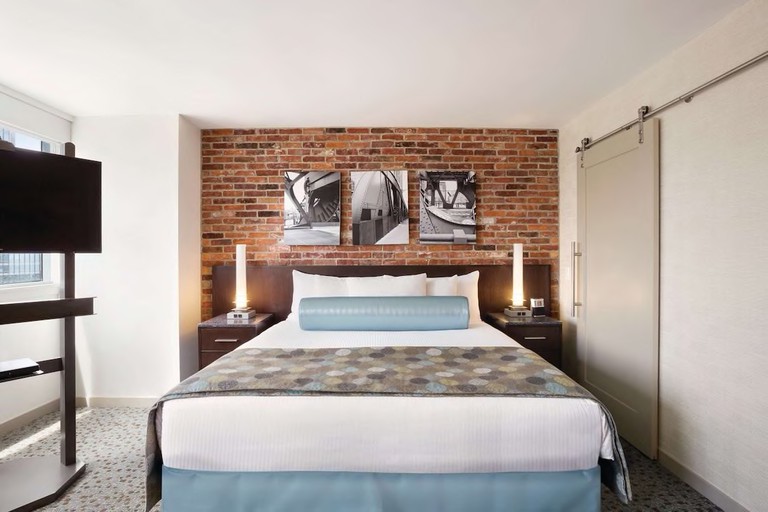 Courtesy of Royal Sonesta Chicago Riverfront / Expedia
Come to the Royal Sonesta for some of the city’s largest rooms and suites, which offer supreme views of the river and sparkling city skyline. The hotel lies just a few minutes’ walk from the Magnificent Mile and is set in glassy high-rise built in 1958. Book the Riverwalk Executive Residence for the best riverfront views – it comes with a kitchen and living area. Royal Sonesta also has its own American tavern, Hoyt’s, which serves Midwestern fare.

The Drake, a Hilton Hotel 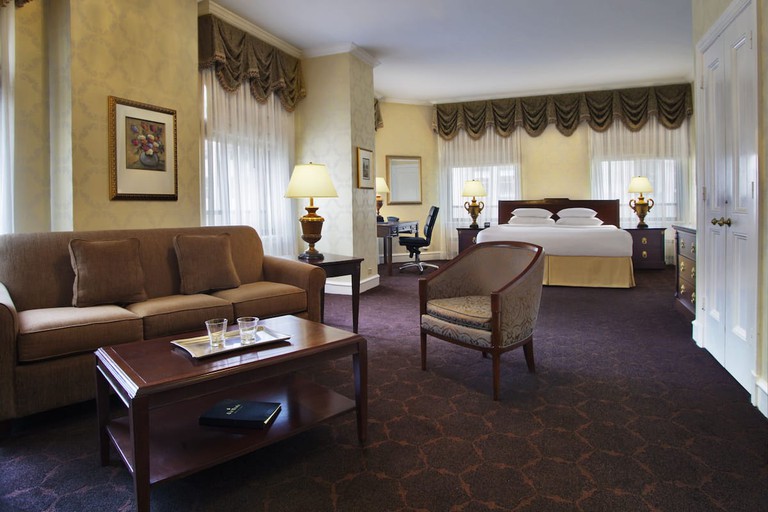 Courtesy of the Drake / Expedia
This 1920 Italian Renaissance-style hotel is the epitome of glamor, with grand staircases and ballrooms. Aside from gold-plated views of Lake Michigan from the north-facing rooms, the Drake boasts eateries with historic accolades. Have breakfast at Café on Oak, where Marilyn Monroe’s initials are carved into the counter, and evening drinks at Coq d’Or, one of the first Chicago bars to get a post-prohibition liquor license. The Palm Court has even served afternoon tea to Queen Elizabeth II. 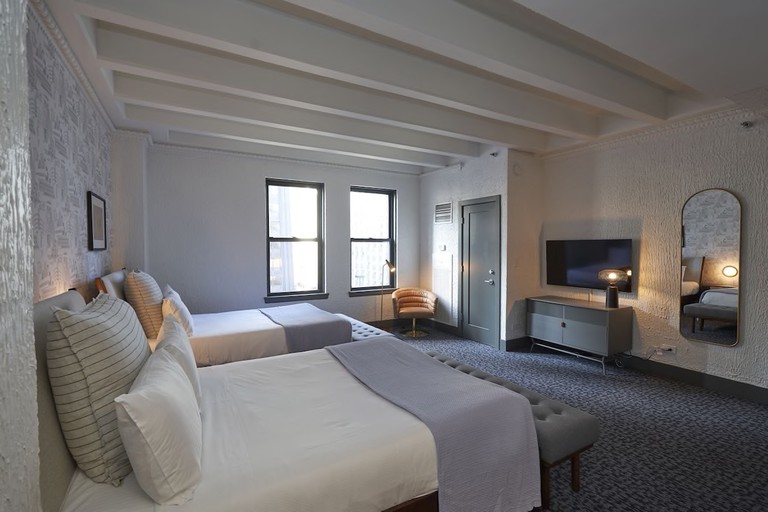 Courtesy of Raffaello Hotel / Expedia
Stay just steps from the John Hancock Building at Raffaello Hotel. Its history dates back to 1926 when it was known as Hampshire House, a 16-story Neo-Renaissance-style apartment building. Since then, it’s also served as a wartime nurses’ residence before becoming a hotel. A recent multimillion-dollar renovation honored the original high ceiling and marble floors, adding modern features such as kitchenettes. Hang out at the 18th-floor speakeasy-style rooftop bar, which specializes in rare whiskies and scotches. 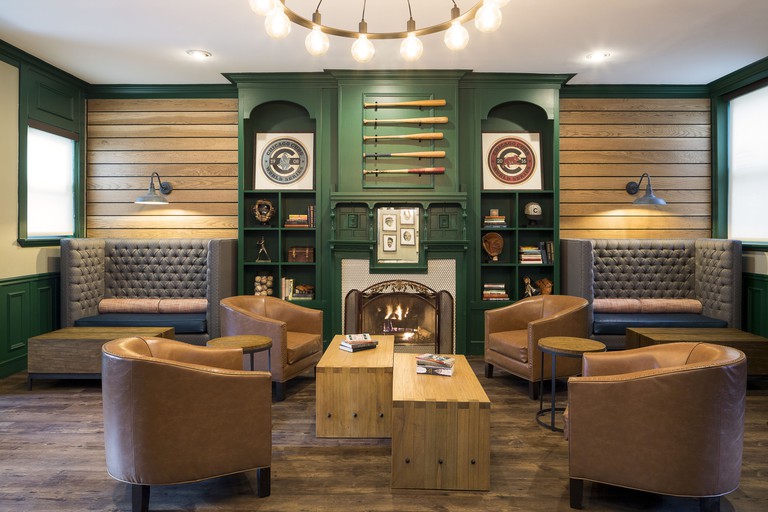 Courtesy of Majestic Hotel Chicago / Expedia
If you’re a baseball fan, stay out in Wrigleyville at the Majestic Hotel, which lies near Wrigley Field, home of the Chicago Cubs. The hotel was built in 1921 and has the feel of an English manor house, with a stately exterior and a lobby featuring a fireplace. The 52 rooms are decorated in black and neutral tones, with large windows and high ceilings. Take advantage of the free breakfast, freshly baked cookies in the afternoon and access to a nearby gym. 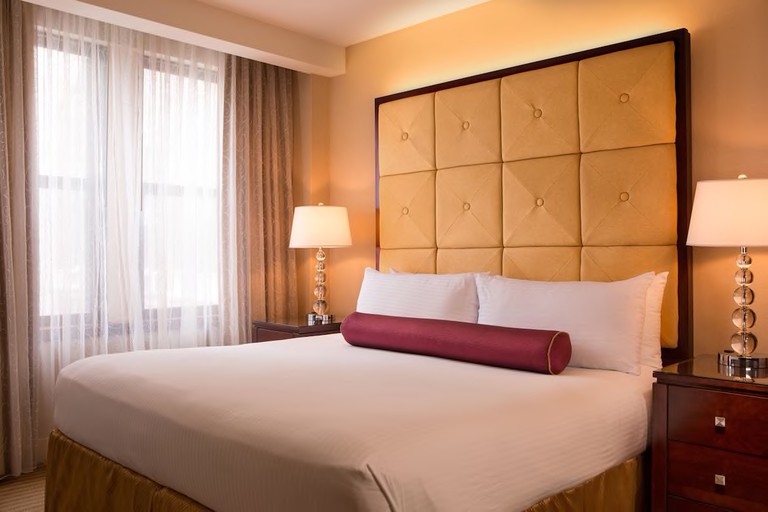 Courtesy of Millennium Knickerbocker Chicago / Expedia
The Millennium Knickerbocker has been a landmark in downtown Chicago since its inception in 1927. Once a penthouse casino and prohibition-era speakeasy belonging to the infamous Capone family, the historic hotel endured a brief stint as Hefner’s Playboy Towers before becoming a classy hotel. Explore its Georgian-style ballroom, have afternoon tea at the Library Tea Room and choose from 50 types of Martini at the 1920s-themed Martini Bar, which hosts live jazz bands.

For an opulent stay, check into one of the best luxury hotels in Chicago – and book your stay now on Culture Trip. If you’re after a great location, book one of the best hotels in the Loop, or for something a little different, check out our guide to the most luxurious places to go glamping in Illinois, all bookable with Culture Trip.