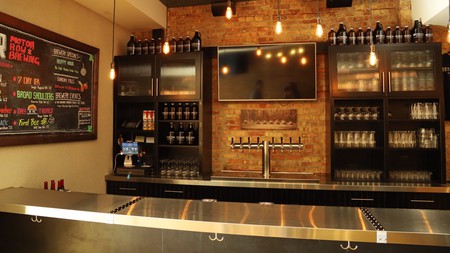 According to the Brewers Association, Chicago had more craft breweries than anywhere else as of 2018 – 167 of them, to be exact. Here are 10 of our favorites. 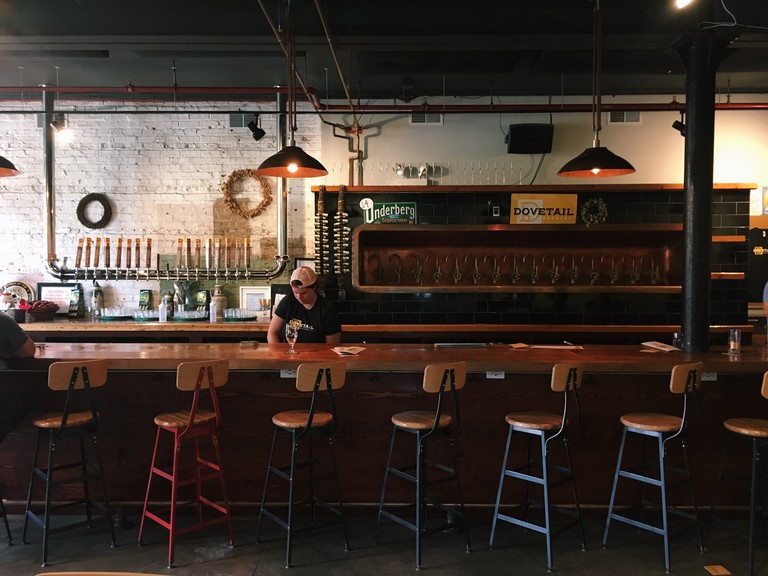 Dovetail Brewery in Chicago’s Ravenswood neighborhood emulates the cozy, family-owned brew pubs of continental Europe. The owners, two certified master brewers who met in Munich and discovered a mutual love of Bavarian ales, approach beer-making as both an art and a science, blending traditional brewing methods with innovative and playful flavors. Pretzels and cheese flights are available for the peckish, but Dovetail is also BYOF (bring your own food), so assemble a spread of chips and dips or order a pizza for your group. Stop by on a Saturday to take a tour of the brewery and enjoy three glasses of beer included with the cost of the ticket.

Begyle bills itself as a community-supported brewing company thanks to its popular subscription service that sends members a new growler or two every six months to a year. The space is dog- and family-friendly, and there are a couple of Skee-Ball machines in the back room for tipsy competitors to enjoy. Try the Sunny Afternoon, a citra-hopped pale ale with tropical fruit notes (perfect for summer sipping), or opt for the Imperial Pajamas Coffee Stout, a rich beer with notes of cherry and chocolate, which includes beans from Passion House Coffee Roasters. And if you like yoga, stop by on Sundays at 11am for a Vinyasa class followed by a refreshing beer. 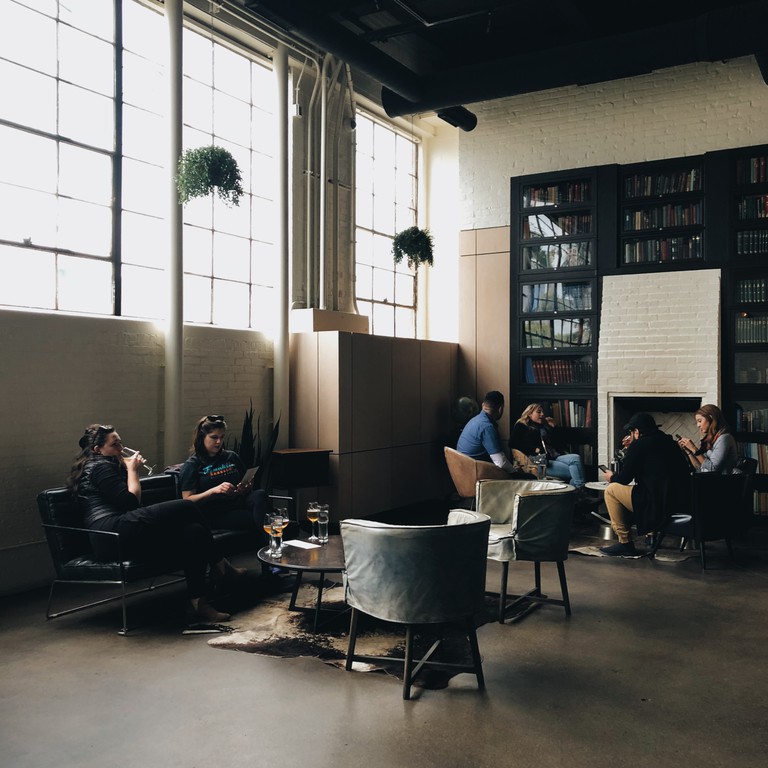 The Moody Tongue philosophy is all about culinary brewing: applying a chef’s mindset, with the most creative flavors and highest quality ingredients, to creating beer. (Brewmaster Jared Rouben has a background in Michelin-star dining.) Visit the tasting room, housed inside a former glass factory, and you’ll get an elevated brewery experience in every regard, from the impeccable service to the flavorful beers and a small, thoughtfully curated food menu including oysters flown in daily, baguettes and sausages, and a 12-layer German chocolate cake.

Sip and dine right alongside huge metallic fermentation tanks at Corridor Brewery and Provisions. Director of brewing operations Brant Dubovick ensures there’s an ever-evolving list of drafts, from hop-heavy IPAs to sparkling saisons and fruity sours. Corridor is also a full-fledged restaurant, so whether you’re in the mood for a “beer bite” like doughy pretzels, or something more substantial – say an artisanal pizza topped with BBQ pork or leek and goat cheese – it’s worth putting your name down for a table (the brewery doesn’t take reservations). 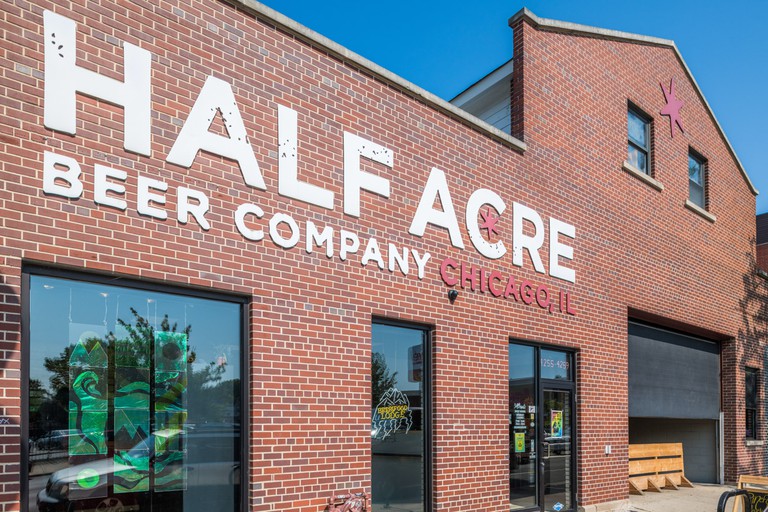 Half Acre Beer Company offers a substantial food menu along with a rotating selection of seasonal brews | © Serhii Chrucky / Alamy Stock Photo
When Half Acre’s original location – a 13,000-square-foot warehouse in Lincoln – became too cramped, it opened a second, even more cavernous space in Balmoral with a huge production facility. The brewery, which was founded by a couple of friends – one an artist, the other an engineer – is known for two year-round staples: the Daisy Cutter Pale Ale and German-style Pony Pilsner, but also offers a rotating selection of seasonal brews. The food menu at Half Acre is way more elaborate than most taprooms. Try BBQ ginger pork, the veggie fajitas or a plate of “truckstop fries”: Old Bay-dusted french fries with beef chili, jalapeños, tomatoes, cheese and avocado creme, topped with a fried egg.
Open In Google Maps
4257 North Lincoln Avenue, North Center, Chicago, 60618, USA
+17737548488
Visit Website
Give us feedback

The beers at DryHop are, as the name suggests, heavy on the hops. Try the Vegan Zombie, a crisp citrus-y brew with a hint of bitterness, or the Sour Patch Kits, a collaboration with Lincoln Park Zoo, with notes of blueberry and a lip-smacking tartness. The food menu here was conceived with beer in mind, so expect dishes that pair well with your pint, including honey sriracha wings, cranberry bratwurst and a pappardelle pasta in a garlic cream sauce with sugar snap peas and sun-dried tomatoes. Finish with a skillet cookie and a growler to go. 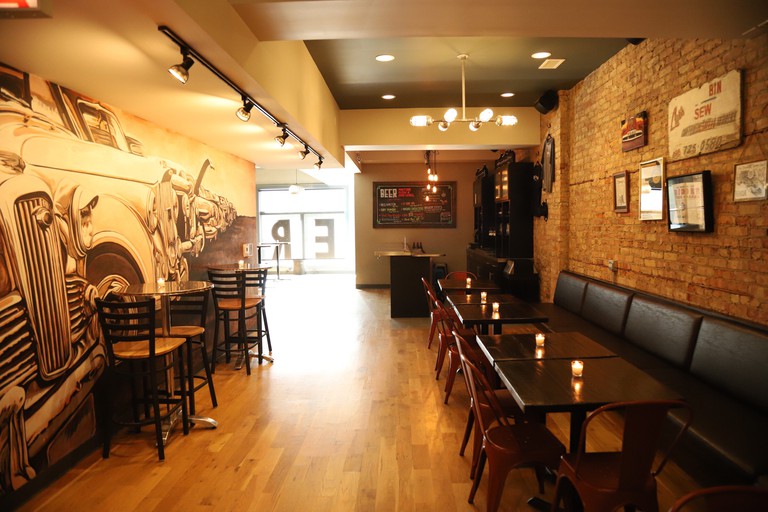 Frank Lassandrello, the head brewer of Motor Row, learned the tricks of his trade while at college in Vermont, creating home brews with his roommate. It wasn’t until 2007 that Lassandrello partnered with his son and purchased a space in Chicago’s historic Motor Row neighborhood to start his own legitimate brewery. Try the company’s four flagship beers – an IPA, a lager, a Belgian blonde and a schwarzbier – or dabble in the seasonal brews, including the award-winning Crimson Vienna – a caramel, hoppy lager with a crisp finish.

With walls covered in blonde wood and decor accented in forest green, Hopewell Brewing’s taproom is lighter, airier and less industrial-feeling than most craft breweries. Long tables fit for communal sipping fill up quickly with large groups of friends and family (kids and dogs are welcome), so get there early. On tap, you’ll always find Hopewell’s Swift IPA (a citrus-y ale) and the crisp, refreshing First Lager. The brewery also offers seven rotating seasonal beers and specialty brews in bottles, including the Stonethrow – a wild ale aged in oak barrels and flavored with sweet Michigan-grown peaches. 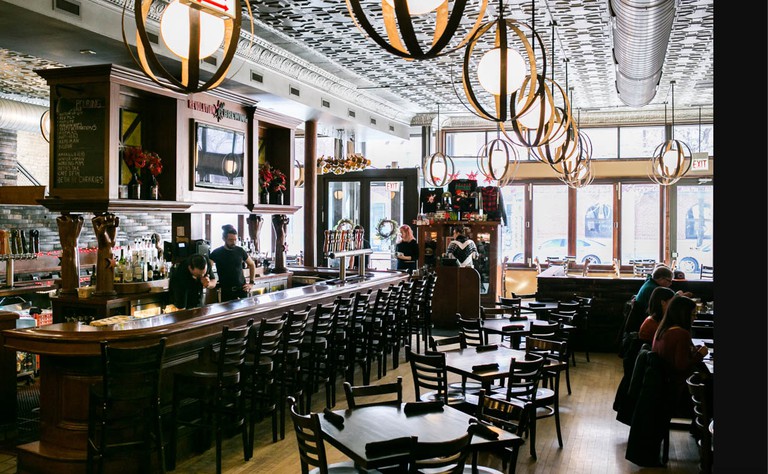 Revolution Brewing is the largest independently owned brewery in the state | Courtesy of Revolution Brewing
Exposed brick walls, orb lights and rich mahogany wood create a cozy ambiance at Revolution Brewing – the largest independently owned brewery in Illinois. Owner Josh Deth’s first foray into the world of craft brewing came in the mid-1990s with stints working at local breweries. After spending three years raising funds for his own brewing enterprise, he set up Revolution in 2010, followed by a production brewery and taproom in 2012. Today, the venue produces around 50 different beers annually, including Great American Beer Festival Award-winners Cross of Gold and A Little Crazy. In summer, you can’t beat a can of the Rosa, a hibiscus-steeped pale ale.
Open In Google Maps
2323 N Milwaukee Avenue, Logan Square, Chicago, 60647, USA
+7732272739
Visit Website
Give us feedback

Craft Ale Bar, Pub, American, $$$
Facebook
Email
Twitter
Pinterest
Copy link
Share
Map View
This brewery takes inspiration from Chicago’s 1886 Haymarket Affair labor protests – which resulted in the eight-hour work day – and aspires to be a place of refuge for the modern working masses, whatever their industry. Chief brewer Pete Crowley opened Haymarket Pub and Brewery in Chicago in late 2010, and the business has since scooped up two gold medals at the Great American Beer Festival. The venue specializes in classic Belgian and contemporary American brews, and offers 10 of its own house-brewed beers (including Crowley’s American Irish Stout and the chocolate malt and coffee-flavored Cuppa Joe Hill Coffee Porter) alongside a selection of craft beers and ciders from other craft breweries.
Open In Google Maps
737 W Randolph Street, West Loop, Chicago, 60661, USA
+3126380700
Visit Website
Give us feedback

This article is an updated version of a story created by Sarah Ashley.