The Best Bookstores In Chicago's Bucktown 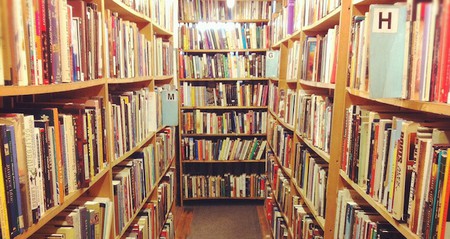 At the heart of the Bucktown community are streets like Shakespeare, Webster, Dickens and Homer, household names locked in the historical deposit of world literature. But for the occasional inscription on a street post, the center of Bucktown would appear absent of a literary scene. ‘Fear not,’ as Olivia of Shakespeare’s Twelfth Night says, ‘take thy fortunes up,’ for the printed prizes are bound at its edges. 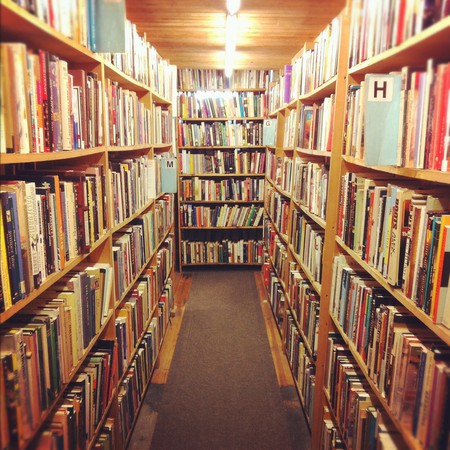 Bookstore, Store, Shop
Facebook
Email
Twitter
Pinterest
Copy link
Share
There’s a measure of intimidation upon entrance into the used bookstore, the dense labyrinth of titles hard for the eye not to miss. Organized by genre and author with laminated markers, the rectangular slivers color the walls and aisles from head to toe. Systematically compacted into three floors, the top level opens to a skylight of bay windows, accommodating the customer with two reading tables and a wooden bench, sedating the mind from the overwhelming abundance of material. Easy enough to navigate independently, any trouble can be readily nipped in the bud by the friendly, knowledgeable and readily available staff. Established nearly 25 years ago, the venue has since occupied three previous locations, residing in its present state for the past 10-12 years. A bibliophile’s Eden amassed with new, old and vintage editions, to ignore Myopic Books would be a practice in nearsightedness. 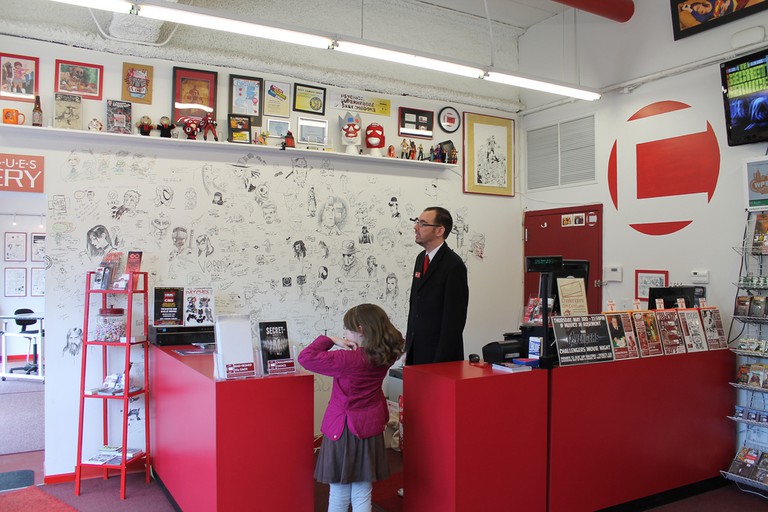 An owner of Challenger Comics with young girl | © Pat Loika/Flickr
Publicized as a small-press and locally owned business, Quimby’s bookstore is, as employee Gabby Schulz likes to put it, ‘full of weirdo stuff.’ Collections of selective fiction, poetry, literary journals, and self-produced publications hoard the shelves. Below the silvered sprayed coffered ceiling, the store is simmered in a musical ambiance of xylophonic rhythm. The emerald tiled floor, exposed brick, and pop-art figurines and manikins lend aptly to Schulz’s description. Matt Davis, another employee, mentioned their most popular titles come from such known authors as Haruki Murakami and David Foster Wallace, although many sales are contingent on the locally printed stock. Originally founded on Damen Avenue in 1991, the current location was established six years later. Hard to miss is the circular emblem of the store — the image of Quimby the Mouse — originally created by cartoonist Chris Ware. Known for his indecisiveness, this iteration depicts the character fashioning two heads — one joyfully reading and the other imprisoned in anxiety — prompting customers to ask themselves, what’s stopping me from enjoying a book from Quimby’s?

Store, Bookstore, Shop
Facebook
Email
Twitter
Pinterest
Copy link
Share
Where superhero films have become the golden ticket of Hollywood, the comic world is hard to miss. Challengers Comic is the antithesis of the needle in the haystack. Illustrated banners line the windows and doors of its outer façade. Once inside, the store’s bright lamps illuminate white walls with red shelves, vents and couches, molding itself a costumed persona of its own. Stacks of comics and graphic novels, both newly released and in recirculation, are stacked and organized by publishers like Marvel, DC, and Vertigo, amongst others. With the ability to rent graphic novels for $10 a month, purchasable boxed storage and preservation kits, shirts, toys, action figures and other memorabilia, the store appears short on nothing. For juvenile readers, to the left of the front desk is a welcoming youth reader alcove named Sidekicks: A Place for Younger Challengers. With material attractive for all ages and running for the past eight years, Challengers Comics appears far from its last publication.

Bookstore, Shop, Store
Facebook
Email
Twitter
Pinterest
Copy link
Share
Hidden on the third floor of the historic Flat Iron Fine Arts Building, Brainstorm Comics is admittedly difficult to find. Once inside, there’s no problem. An amiable security guard is available to guide you, if necessary. Atop apartment #321’s doorway is a blue banner painted above with the company name, alongside which decorative superheroes safeguard the gateway. Walking through, sounds of gunshots and explosions from Ian Fleming’s The Living Daylights can be heard playing on the flat screen. Ornamental hero and villain flags drape over a procession of long tables, catered specifically to tabletop gaming such as Dungeons and Dragons. An assemblage of new and old comics line the shelves, with the majority stored in boxes for space purposes. Action figures and other comic accessories are available, as well as DVD copies from film and television. Though admittedly a small place, the friendly environment welcomes endless possibilities.
By Joshua Gurian

Joshua Gurian, a Chicago native, earned a B.A. in English literature from SUNY Binghamton. He currently lives in Bucktown.
Give us feedback