The Best 24-Hour Diners in Chicago 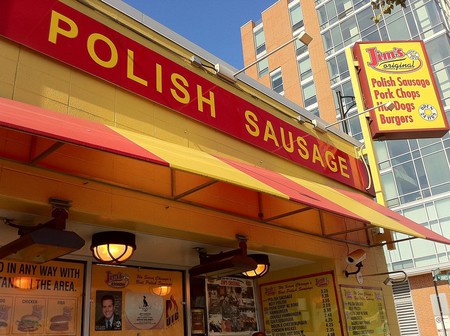 Jim's Original has been serving up Polish sausage sandwiches since 1939. | © Victorgrigas / WikiCommons

Whether you’re a college student crashing in Chicago for a few years, a tourist cramming in as much of the Windy City as possible in one weekend, or a local with a penchant for delicious late-night grub, there’s a 24-hour spot for you. Bonus: these places serve up more than just greasy diner food. Not that there’s anything wrong with greasy diner food! It’s just nice to have options. 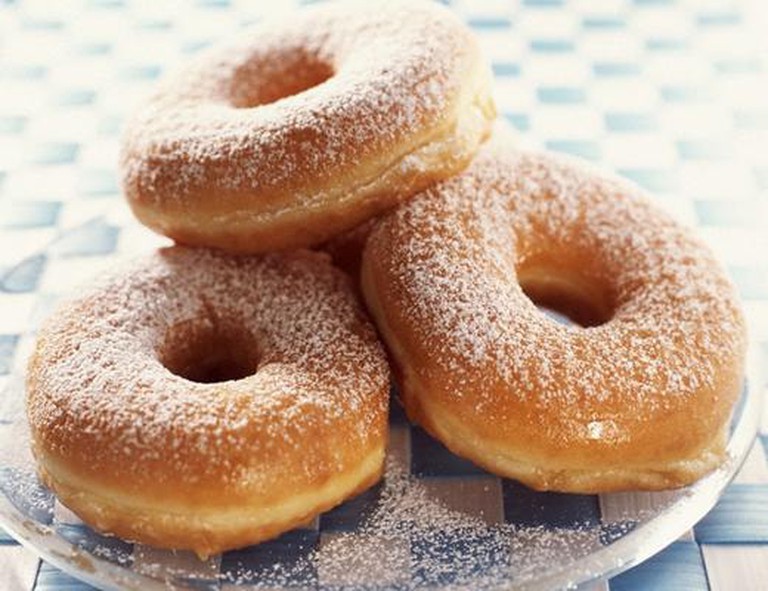 Huck Finn Restaurant serves up hearty home cooking all day long in three Chicagoland locations. While best known—or perhaps most appreciated—for its donuts, the diner has excellent breakfast, lunch, and dinner options, too. In fact, it used to be known simply as “Huck Finn Donuts.” Today, everything from blintzes to burgers, BLTs to broiled steak is available here, and it’s all expertly made. The busiest time of day at Huck Finn is the brunching hour, between 10 a.m. and 12 p.m. If you’re feeling adventurous, try the Tom Sawyer Feast: two large fish filets over golden toast, slathered in tartar sauce. Just remember to save room for a donut or some hand-packed ice cream. 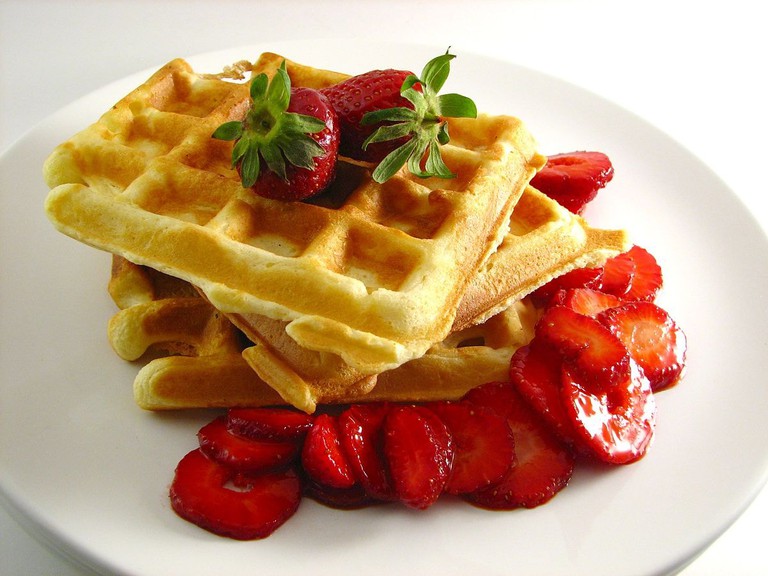 Since 1995, this Wicker Park staple at the corner of Ashland and North Avenue has perfected the art of the all-American diner. Breakfast, lunch, dinner, and dessert are served here 24 hours a day, every day of the week, 365 days of the year. Hollywood Grill’s vibe matches its name impeccably: brightly colored booths lined up underneath a painted mural of the Hollywood sign in Los Angeles, a flashy yellow gumball machine, and a kitschy bar lined with multi-colored tiles and bright red retro stools. From 2 p.m. to 10 p.m. kids eat for $1.99 and everything on their early riser menu is only $6.99 between 6 a.m. and 9 a.m. If you’re feeling the old-school vibe, try the meatloaf or the continental breakfast. If you’re a more innovative eater, there’s the apple caramel waffle or the avocado Benedict. Either way, there’s always fresh fruit pie à la mode. 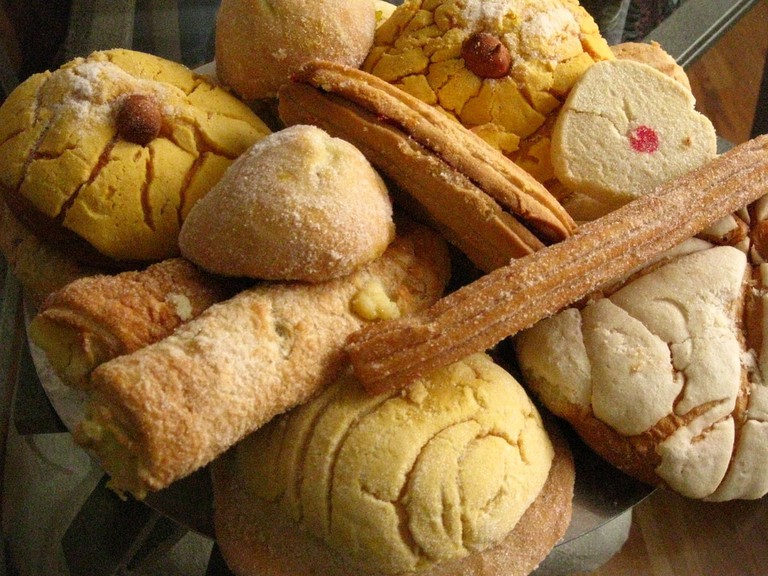 This bakery has been family-owned and operated since 1982 when Markellos Res decided to start making and selling Greek pastries. By 1991, Markellos was able to expand his namesake Baking Company to its current spot in Albany Park. He also broadened the selection offered at the time to include Guatemalan and Mexican sweet breads and treats. Today, you can try all these goodies and more, including Polish kolaczkis, which are flaky, buttery cream cheese cookies. Feta turnovers, salted croissants, apricot coffee cake — the list goes on. Open 24 hours a day and with a new batch of fresh baked goodness popping out of the oven every 20 minutes, this is a must-visit place for anyone who has ever craved a hot, delicious pastry with a good cup of coffee. (The cup of coffee is free with the purchase of a pastry, by the way.)

In 1939, just after arriving in the U.S. from Yugoslavia, Jimmy Stefanovic took over his aunt’s hot dog stand when she fell ill. Shortly thereafter, in 1941, Jim bought the stand from his aunt and began making his signature Maxwell Street Polish Sausage Sandwiches. What began as a simple recipe turned into something of a legend. After 70 years, the sandwich is built the exact same way and served at all hours, day or night. First, a giant Polish sausage made with pork, beef, and a special mix of spices is grilled until the outside is a bit crispy. The sausage is plopped into a standard hot dog bun already lined with mustard, then topped with plenty of grilled onions and a few hot peppers. The result is the reason the stand has stayed in business for decades. Since 1941 the menu has broadened to include hot dogs, burgers, and chicken sandwiches. Fries are now served free with any of these orders. And, if you want to travel back to the early days of Jim’s Original, order a grape soda to go with your Polish sausage sandwich. Trust us – this place knows what it’s doing. 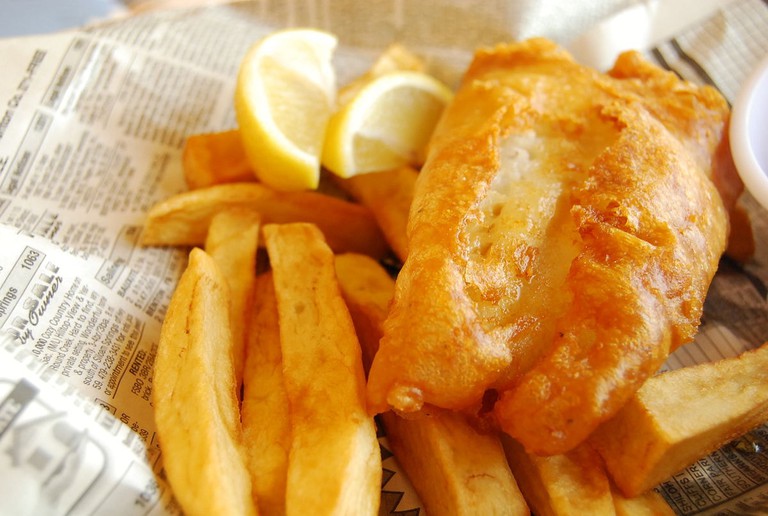 This 24-hour spot has mastered the art of fried—and fresh—seafood. Founder Lawrence Schweig opened up a shrimp shop in 1950 right on the bridge crossing over Canal Street. After getting the hang of working with fishermen and exploring new recipes, Lawrence expanded both his shop and his menu. His family still owns and operates several locations of Lawrence’s Fish and Shrimp today. At exceptional prices, diners can chow down on coconut fried shrimp, whole catfish, frog legs, scallops, and ocean perch. Salads and chicken are also available if someone in your party isn’t partial to sea-dwelling critters. The sides are also perfectly proportioned and seasoned to accompany the main courses; try the okra, corn fritters, or coleslaw, which is always a great partner to seafood. 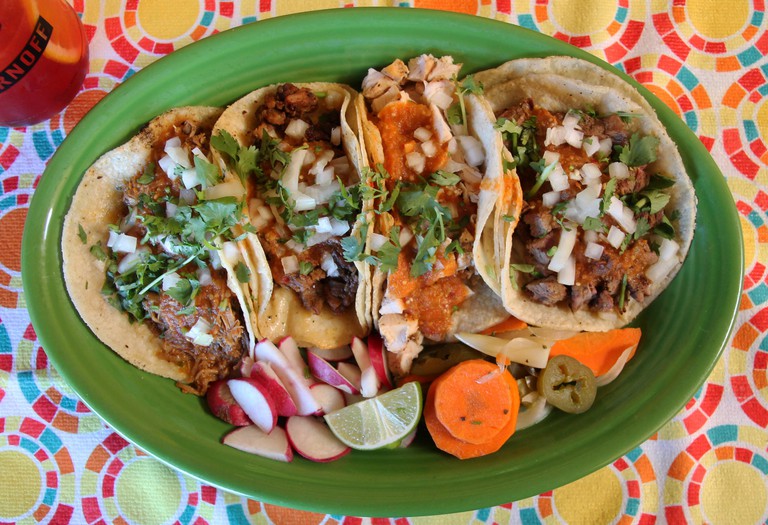 Tacos are just the tip of the iceberg when it comes to options at Arturo's Tacos, open 24 hours. | © Sarah Stierch / Flickr

Arturo’s Tacos in Bucktown is open 24 hours a day, so there’s really no excuse not to get in there and try one of their many amazing Mexican dishes. The atmosphere is jovial and colorful; the food is always exactly what the doctor ordered, whether that’s late-night burritos to prevent a hangover or mid-morning huevos rancheros to cure one. Arturo’s has everything one hopes for at a Mexican restaurant (chilaquiles, tacos, tortas, gorditas), plus a wide variety of breakfast, dinner, and dessert options. Don’t ignore the full bar, either. Speaking of full, you’ll be really stuffed after devouring their full red snapper or full bone-in ham dishes. Go for it! You’ve got 24 hours, after all. 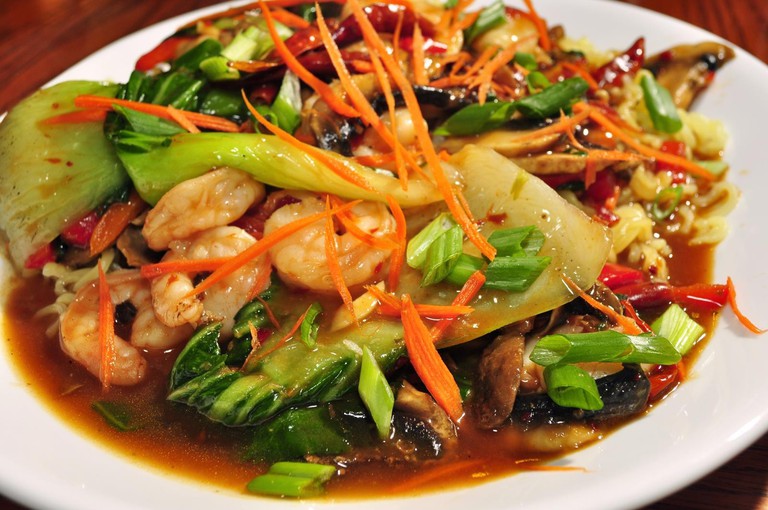 Three Happiness serves up Szechuan shrimp at all hours of the day in Chinatown. | © jeffreyw / WikiCommons

Located in historic Chinatown, Three Happiness serves up authentic Chinese cuisine 24 hours a day, seven days a week. Zagat has this spot featured on both their lists of Best Dim Sum in Chicago and Best Chinese Restaurants in Chicago, so there’s definitely expertise behind the menu. Regulars are also vocal about why they keep coming back: the delicious food and great prices. Plus, the hole-in-the-wall, unpretentious vibe at Three Happiness enhances the restaurant’s no-frills attitude. Weekends are usually pretty packed here, so if you have the option, aim for a weekday. Again, it’s open 24 hours, so maybe a late-night Chinese food craving is the best time to try Three Happiness. The pork pot stickers are a favorite for many locals, but with chop suey, egg foo young, friend rice, and much more, don’t limit yourself to one order.