Meet The Head Brewer Of Band Of Bohemia, Michael Carroll

If you’re looking for a different beer experience, look no further than Band of Bohemia. Michael Carroll is head brewer and co-founder of Band of Bohemia, which was opened in 2015 with the aim of becoming a culinary brewhouse. Combining healthy, delicious food with interesting beers, or even coffee, he wants the people of Chicago to experience something different. 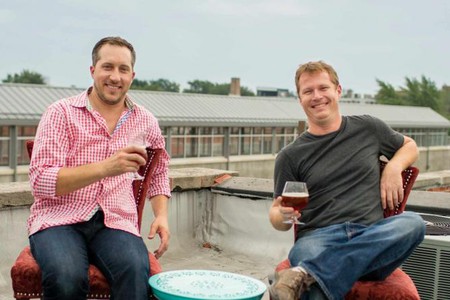 TCT: Where do you get your inspiration from to create new and different kinds of beer?

MC: Inspiration comes from many different avenues — the past, present, and future, from the stars above, the universe as a whole, from our friends and lovers, and by keeping an open mind and looking at the world from different angles. A large portion of the beer creation comes from past experiences, and having worked in some of the greatest kitchens in the world, I often pull a lot from these sources. Grant Achatz has been a large influence on my creativity, by being able to conjure something that is familiar but made with a sense of whimsy and perhaps a bit of a shocking quality to it.

TCT: We noticed you decided to remove the fryer from your kitchen. What is your vision for the type of food served alongside your beer?

MC: The type of food is derivative of a more worldly approach. Heavy usage of fryers is very American. We are looking towards a more global influence on our style of cuisine. If we do want to fry something, we’ll put a pot on the stove and fill it with oil if a dish happens to call for a fried element or ingredient. In the capable hands of our executive chef, Matt Dubois, we are looking to focus on a healthier, finer dining realm, with four-star service that is engaging and approachable, a coffee and tea program that will be unparalleled — all of which contribute to what we are calling a culinary brewhouse. And with that, the term ‘brew’ can be used in many facets of our lives and at Band of Bohemia — be it for coffee, beer or even in the foundational ideal that we will be constantly evolving and tinkering.

TCT: You’re opening in late October, early November [2015]. So far, what has been the hardest step and what advice would you have given yourself before this project started?

MC: The hardest step has been getting it started. To find someone to believe in our dream and then to move through the bureaucracy of any city or government can be a true test of patience. But in the end, it’s all worth it. As for any advice I would give myself, it would be to stick to it; anything worth having is worth fighting for — and above all, be patient.

MC: Dinner with anyone you say… Well, I’d go with Jerry Garcia — hang out with some cheeseburgers and milkshakes, smoke a joint, and shoot the shit, as they say. He was an incredibly intelligent guy who I’m sure would have some great stories to tell. Maybe we find time to jam together, if the mood fits.

TCT: What is your favorite travel destination?

MC: Europe. To be specific, Nice is awesome; I can always eat some escargot and bread and wash it down with a bottle of rosé. If I were going somewhere with my wife, I’d have to say Paris; we’ve been there together once, and she had lived there as a student in college, so she knows a bit about the city and where to go and how to get there. Of places I haven’t been and would like to go — I’d say Japan. I’d like to go there one day, perhaps open a farmhouse brewery there; that would be really cool.

TCT: How would you describe Band of Bohemia in 80 characters?

TCT: The Count of Monte Cristo or To Build a Fire?

MC: The Count as I’m not familiar with To Build a Fire — no offense intended to the author or associates.