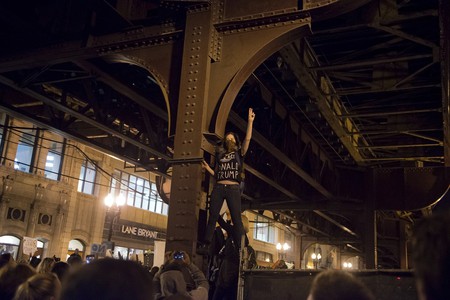 A woman protests the election of Donald Trump in Chicago

Suffice it to say, it’s been a volatile few years in the United States. Locally, Chicago has struggled with astronomical homicide rates and police brutality. Nationally, Americans recently battled through one of the most divisive and tense general elections in living memory. Thousands have gathered on the Standing Rock Indian Reservation in North Dakota to protest the construction of the Dakota Access Pipeline, a demonstration that’s spanned more than six difficult months. And somehow, Chicago-based photographer Alexander Gouletas has been there to capture it all. Here we chronicle his deep interest in the process of civil disobedience and his soft spot for wildlife and the environment, subjects he captures through an ever-more compelling photographic practice.

Gouletas got his start with local newspapers and began a steady career in food photography more than 10 years ago, but he always knew he wanted to do more. He photographs what interests him, plain and simple. Social justice and wildlife conservation were just some of the topics that found their way in front of his camera during off-duty hours, and he managed to keep his professional and personal subjects separate. But after a stint of teaching at the Chicago Photography Center a few years back, things took a turn for him. 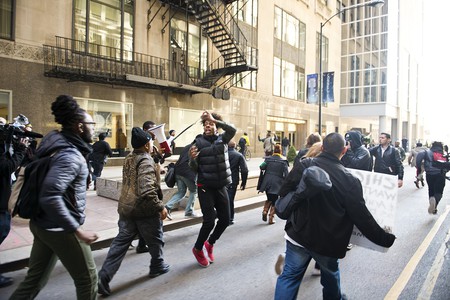 ‘That’s when we had a show where I featured a couple photos of demonstrations around Chicago. And that was really encouraging because there was a lot of interest in the work that we showed. I feel like I was one of the only people there doing politically motivated material. After that I just kept with it,’ he said. 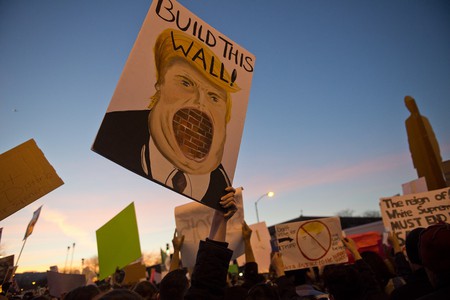 A New Platform for Sharing

He continued attending city demonstrations in between his professional gigs, including the famous Laquan McDonald protests, the Donald Trump rally protest in March and the post-election marches outside Trump Tower in November. His documentation of these events can be found through his own posts on BoredPanda, an ‘art, design and photography community for creative people’ headquartered in Lithuania – but his introduction to the site, one of his biggest cyber platforms to date, was by chance.

‘The very first thing I did at the beginning of [2016] was that I decided I was going to challenge myself and do something I’ve never done: take 30 portraits in 30 days. And it was a marathon, logistically. Scheduling and getting everyone to show up on time, that was honestly the hardest part,’ he said. 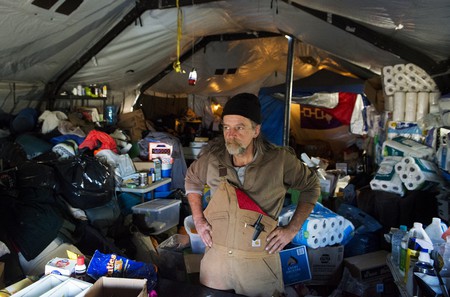 Gouletas soon realized he needed a venue to publish the project. One of his 30 subjects suggested BoredPanda, thinking his work was right up their alley. His first posts did incredibly well and were featured on the site’s homepage, further spurring his desire and motivation to share his work with the world. Upon realizing the substantial audience he gained from posting on BoredPanda, he thought, ‘Yes, this is a fun, creative endeavor. Now let’s get people to pay attention to something.’

His 2016 was filled with even more photojournalism and traveling to support his craft. A leisure trip to Spain with his girlfriend, producer, agent and partner-in-crime Michonne Proulx turned into a business opportunity thanks to his interest and initiative.

‘I’ve always been really into wildlife, and I was doing some research when I realized that this center that was keeping the Iberian lynx alive was not very far from where we were. So I made it part of the trip. It was just a priority of mine to go see it and try to get some footage of the animal in the wild. We didn’t luck out on that one, but we sort of formulate our trips around things we want to do and what’s important to us,’ he said. 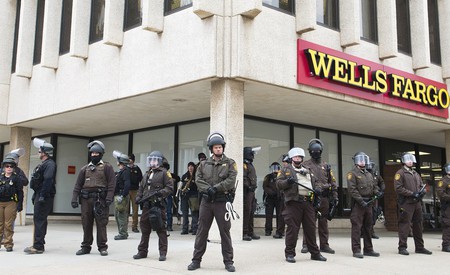 That passion is exactly what drove the pair to their next project: photographing the #NODAPL protests at Standing Rock in North Dakota. It had been on their mind to visit for months, and the tumultuous political climate finally pushed them over the edge.

‘I don’t know if the election was the final nail in the coffin,’ Gouletas said. But following it he had an overwhelming feeling for action and thought, ‘We need to do something. We need to use our talents in any way we can to get this message out.’

So without any sort of press credentials or assignments to follow, he and Proulx drove to Bismarck and stayed near the Standing Rock site from November 16-19. And right as they pulled into town, they were plunged into the town’s charged atmosphere, confirming the importance of documenting the divide.

‘There was this contingency of anti-protesters that were in Bismarck that would drive by in cars and yell things. Things that were very combative against any outsiders that were there protesting,’ he said. 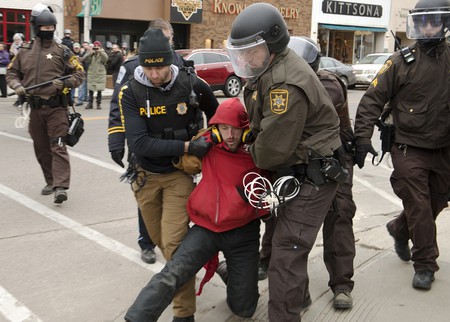 A man in Bismarck is arrested by police

Gouletas witnessed one man’s arrest, and watched him be dragged down the street with his nose bloodied and shoulder dislocated. He connected with one of the protest’s leaders at a spot notorious for decent cell phone reception. The young woman expressed concern that her phone was being hacked into after showing odd messages from unfamiliar service providers.

He advised her to turn the phone off completely to avoid her information being released, and later heard activity on the local police scanner that the woman was indeed being hacked and closely watched by law enforcement.

But after experiencing similar phone trouble with fellow reporters during the 2015 Laquan McDonald protests, this wasn’t what shocked Gouletas the most. 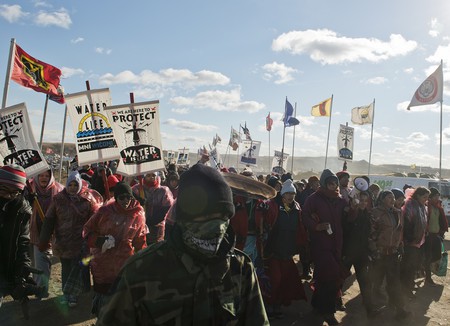 ‘There was no network news there. The local news was just propaganda and misinformation, like the protesters were being bussed in and being paid for violence,’ he said.

Aside from his photography, Gouletas has dabbled in other forms of media to showcase his work and convey a message. He brought his writing talents to supplement the BoredPanda posts, and he’s also an active user of Periscope. 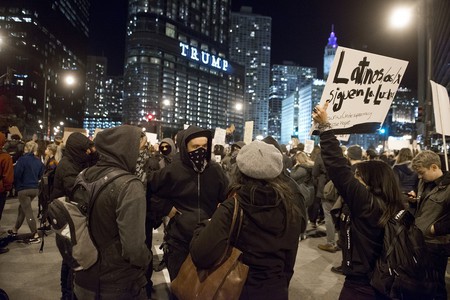 The service allows people to stream interactive video live to any type of audience. Gouletas used it to document aspects of Standing Rock as well as events like the Wrigleyville victory celebrations after the Chicago Cubs’ World Series win and the post-election Donald Trump protests through downtown.

Each of the streams attracted tens of thousands of viewers, giving him a whole new platform to manage. But it has quickly become important to him that his online presence comes together into one cohesive voice, marrying his fragmented audiences from Instagram, BoredPanda and Periscope.

Gouletas recognizes that it’s an important time to have a voice like his as a civilian journalist, because ‘there is so much disinformation that we must fight against,’ he said.

‘We have the ability to share a truth to an audience instantly, and hopefully, without censorship. I worry that our rights will become vilified, and the only narrative will be one written for us,’ he continued.

A woman protests the election of Donald Trump in Chicago

All photos courtesy of Alexander Gouletas