Travel through five decades of Soviet artist Aleksandr Zhitomirsky’s satirical and political work in this temporary exhibit at the Art Institute of Chicago. Humanism + Dynamite = The Soviet Photomontages of Aleksandr Zhitomirsky consists of his photography, photomontages, and a handful of his collaborations with other artists. The exhibition is free with regular museum admission and runs through January 10, 2017.

All photos are courtesy of Elizabeth Newhart.

Aleksandr Zhitomirsky (1907–1993) was a leading political artist for Soviet Russia throughout the twentieth century. He published his first work in 1929 and his popularity took off with World War II, continuing through the Cold War and civil rights era, through the late 1980s.

This exhibit showcases over 100 of his art works, a majority of which are photomontages. His (and other artists’ of his time) physical construction of photographic images was a precursor to what, today, is accomplished with Photoshop and digital editing programs.

For example, the description of materials for an image he created in 1980 of a tiger wearing a military hat and cuff while drinking from the Persian Gulf reads, ‘Cut-and-pasted gelatin silver print, India ink, gouache, and scratching on pasteboard’; today that would be entirely constructed on a computer in a fraction of the time. And that’s what makes his long career of work so intriguing and impressive. 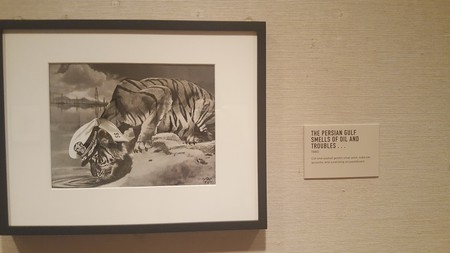 The Persian Gulf Smells of Oil and Troubles... by Aleksandr Zhitomirsky

Zhitomirsky was influenced by the techniques of popular and pioneering German photomonteur John Heartfield. His covers for the Arbeiter Illustrierte Zeitung (Workers’ Illustrated Newspaper, or AIZ) inspired a generation of artists across Europe to create seamless and satirical photomontages.

One of Zhitomirsky’s shining moments during his political art career was his involvement with Front-Illustrierte: Für den Deutschen Soldaten (Front Illustrated: for German Soldiers) during World War II. After the German army invaded Russia, the chief of the Red Army Political Directorate ordered quick production of a German-translated, heavily visual photographic publication that was to be air-dropped behind Nazi Germany lines. Zhitomirsky, along with just five others, staffed the magazine that was to send a peaceful message to German soldiers that they would be treated well if captured by the Soviets. 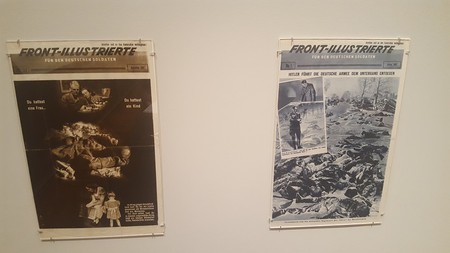 Along with this publication, Zhitomirsky produced other political propaganda leaflets that were dropped on the German soldiers. Many of them called for resolve, asking the troops to either surrender their guns or attempt to survive the long Russian winter. These works spread Zhitomirsky’s name even further and caught the attention of military leaders. 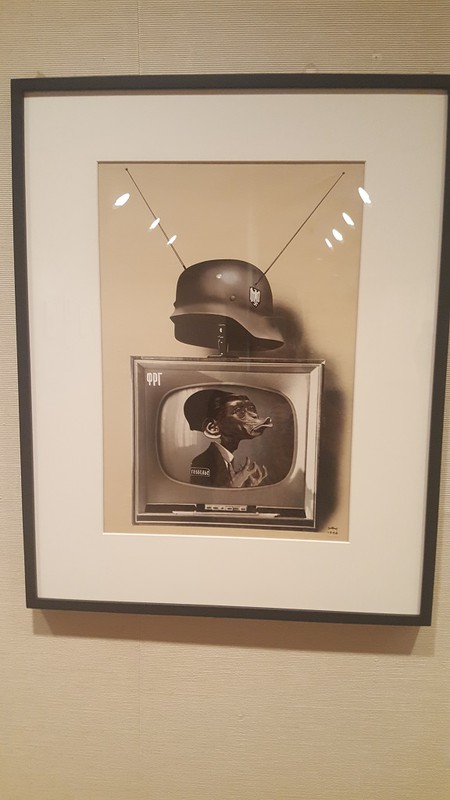 On the Military Wavelength by Zhitomirsky

After the war, Zhitomirsky’s art adapted to other current events, including the Cold War, the civil rights era, oil crises, and colonial liberation in Africa and Asia. With time his talent grew and expanded to include a wider range of subjects and techniques; he incorporated wild animals posing as humans and engaging in everyday tasks, as evidenced by the image of the tiger from 1980 referenced above.

By the time of his death in 1993, Zhitomirsky was one of the most celebrated photomonteurs in Russian history. This exhibition at the AIC is the first dedicated solely to Zhitomirsky in the post-Soviet world and coincides with the publication of an extensive monograph of his work, written and compiled by Erika Wolf. Aleksandr Zhitomirsky: Photomontage as a Weapon of World War II and the Cold War will be available on November 29, but guests of the exhibit can view an advance copy on display alongside Zhitomirsky’s art.