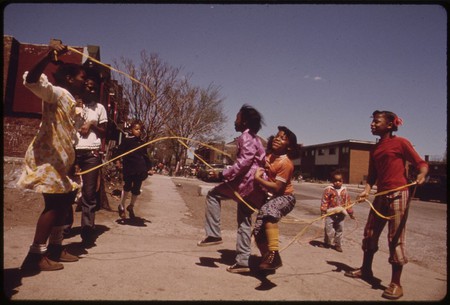 Patricia Frazier grew up in Chicago’s Bronzeville and Englewood neighborhoods, just south of the Loop and Chinatown. This year, Urban Word, an organization focused on celebrating and encouraging youth participation in the literary arts, named 19-year-old Frazier their 2018 National Youth Poet Laureate.

Frazier, the second person ever to receive the honor, writes with a strong sense of place and actively turns to her city as a source of inspiration.

“When I first started writing poetry, I was writing about stuff that I witnessed right outside my front door,” Frazier recently told Chicago Magazine, “my story with gentrification, living in Bronzeville, [and] being pushed out when my projects were torn down.”

As a young girl, Frazier and her family lived in Bronzeville’s Ida B. Wells Homes, a public housing development. The series of row houses and apartments named after the iconic Civil Rights activist were highly coveted living spaces at first. 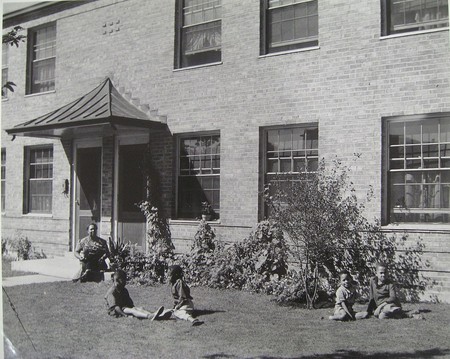 Residents outside the Ida B. Wells Housing Project around 1950. | © Devin Hunter / WikiCommons

But in 1995, the U.S. Department of Housing and Urban Development stepped in, removed the Chicago Housing Authority from ownership, and decided to demolish the projects due to its deteriorating condition. Frazier, who was nine years old at the time, and her family relocated to Englewood in 2009.

Frazier challenges the media’s one-note reporting, which portrays Englewood as a crime-ridden neighborhood rather than a community.

She went on to tell WBEZ that, when writing, she wonders, “how can I make more visceral the injustices that are going on in my neighborhoods or how can I make more celebrated the joy that comes from communities that usually have a harsh light shed on them.”

Frazier, who currently studies Cinema and Television Arts at Columbia College, believes engaging young people in the literary arts is as easy as allowing them to tell their own stories and read stories to which they can relate.

“I think that people need to know how to tell a story,” Frazier told WBEZ. “I didn’t go outside when I lived in the projects just because I was afraid of what was being told to me about myself … We need to stop telling people that their story needs to be told in a specific way.”

Community members like Asiaha Butler, president of the Resident Association of Greater Englewood, are turning empty lots into community spaces. These spaces host parties throughout the summer with music, food, and art to build a greater sense of camaraderie among neighbors. According to Chicago’s National Youth Poet Laureate, it’s up to young writers and activists to get the word out about real people, events, and histories like this in Englewood.

Frazier’s prominent, insightful voice speaks with passion and truth about the city’s ever-evolving landscape. And she’s only just getting started.

An excerpt from Patricia Frazier’s poem, “A Black Girl’s Attempt at Escaping Gentrification”:

Why you think the anti-englewood rhetoric percolates

its way through Chicago bodies A blood clot

of blackonblack crime When northside neighborhoods

until the Whole Foods is a town made for holes

Grave plots for those who couldn’t be whited out

and abandoned buildings turned into condos

Send me to the sunken place