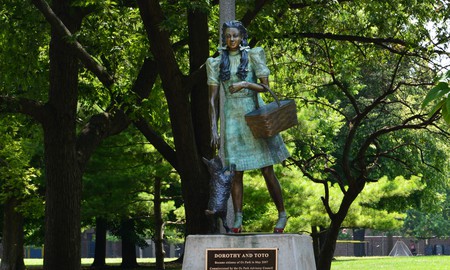 In Chicago’s Lincoln Park neighborhood, at the intersection of Lincoln, Larrabee and Webster, a large and whimsical statue of the Tin Man from The Wizard of Oz stands tall. Built from discarded car parts, this shimmering silver sculpture welcomes visitors to the city’s Oz Park.

With trees, grass and gardens blanketing the entire area in lush green, Oz Park feels like Chicago’s own little Emerald City. Wind your way through the space and you’ll also be greeted by the Scarecrow, the Cowardly Lion and, of course, Dorothy and Toto.

In 1976, the park was named to honor L Frank Baum, the writer of The Wonderful Wizard of Oz (1900), who moved to Chicago’s Humboldt Park neighborhood in 1891. A few years later, he began to write children’s books, and while living in Chicago he produced the fantasy text that would go down in literary and cinematic history. 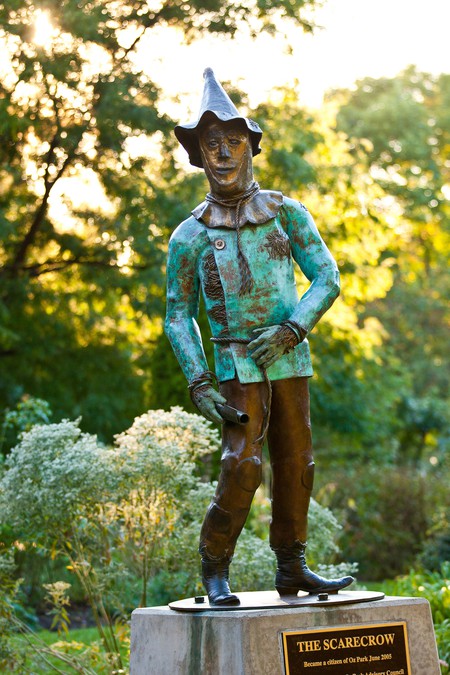 Oz Park’s 13 acres (five hectares) contain, among other facilities, three baseball diamonds, the Emerald City Gardens, tennis courts, basketball courts, a running path, Dorothy’s Playlot (named for Baum’s Dorothy as well as Dorothy Melamerson, the park’s biggest individual donor) and significant green space for anyone looking for a grassy spot to lie back in and relax. Even though it’s outside, there is something about the park – always filled with families, sports teams and dogs – that simply feels cozy.

Perhaps this park feels so special because its creation and maintenance have almost entirely been the work of the surrounding community, mainly through the Oz Park Advisory Council (OPAC). Judy Johanson, the group’s president and a founding member, lives directly across the street from Oz Park.

“I walk my dog twice a day in the park,” she says. “When I play tennis, I play on the tennis courts. I raised money for all the Oz Park sculptures. I volunteer in the garden.”

The OPAC has raised more than $1.6 million to fund maintenance, beautification projects and events such as outdoor film screenings. 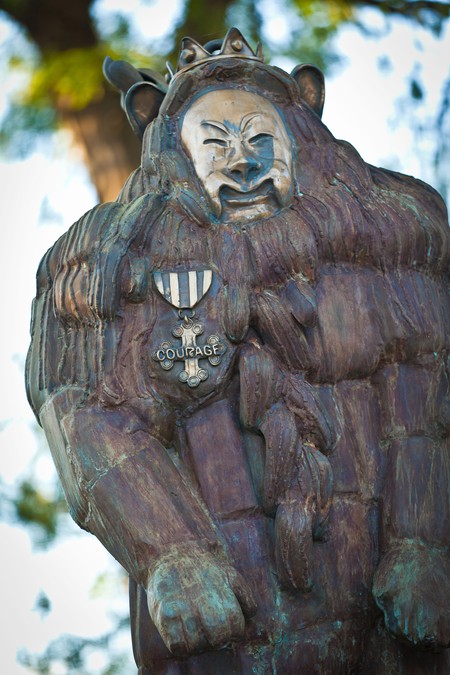 Visitors have the OPAC to thank for the park’s charming statues. It took 12 years to get them all installed, beginning with the Tin Man in 1995, and ending with Dorothy and Toto in 2007.

“People actually come from all over the world to see the sculptures,” says Johanson. “There is not a day – I don’t care if it’s pouring down rain – that someone is not standing in front of one of those sculptures taking a picture.”

All four statues were created by the late local sculptor John Kearney, who lived from 1924 to 2014 and made a name for himself fashioning sculptures of animals from car parts. For Oz Park, however, only the Tin Man was created from those materials, making this particular statue a special attraction. The other three are still delightful, and are all made from bronze. Johanson fondly remembers Kearney calling up and inviting her to watch him construct pieces of the statues, such as the face of the Cowardly Lion.

Each statue also has its own playful plaque. Three of the four state the year the character “became a citizen of Oz Park” and all of them thank the generous donors – referred to as the Good Witch Glindas, Emerald City Citizens and more – who made their existence possible. 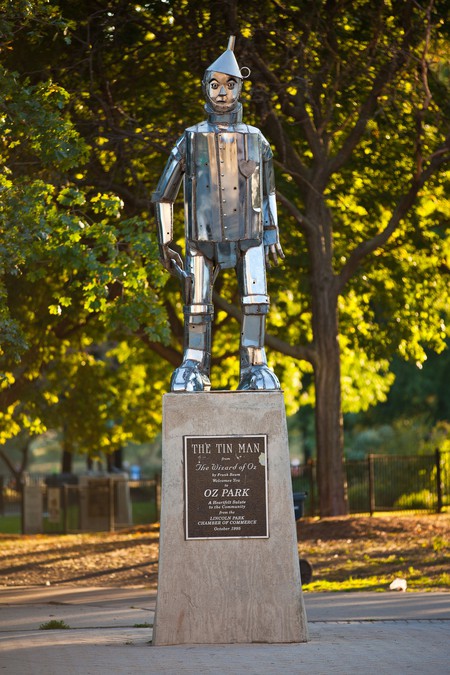 The OPAC is also responsible for founding the park’s beautiful Emerald City Gardens, an area that provides a quiet refuge from the city, in 1994. The garden’s 17 beds are packed with perennials, from lavender to roses to lilies.

OPAC member Kathy Jordan has volunteered in the garden since its inception 25 years ago. She says, “It has grown into this beautiful area that is just what we wanted it to be: a peaceful sort of place in the park that’s busy with all kinds of activities.”

Almost always filled with people, Oz Park is bright and full of life, the way those who work so hard to maintain it strive to make it feel every day. It’s small, but it’s mighty. “It’s a true neighborhood gem,” says Jordan, “that we’re very proud to have built and be a part of.”