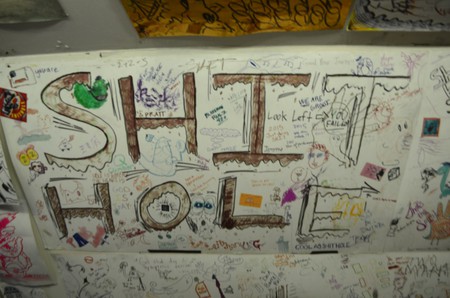 Chicago has been home to many comedy venues and showcases over the years, from cultural touchstones such as Second City to showcases at places like The Annoyance Theater. The shows themselves may be improvised, but the vibe before and after the show feels traditional, if not formulaic. As soon as the lights come back up, the magic is gone, and everybody proceeds with the rest of their lives.

The Shit Hole, Chicago’s leading showcase for performances seeking to make an artistic statement, completely redefines the standard. The audience participates beyond just yelling out suggestions. The experience doesn’t begin or end onstage. It is unique — nothing short of a spectacle from the moment you arrive until the moment you reach home.

When you visit the website, the first words you see say, ‘You just have to find it.’ It is on you to find the email address on the website. You have to engage. You email The Shit Hole, and you will be given a street corner to call from the day of the show. You go to the street corner, and you’re given directions to the night’s performance space.

Attending The Shit Hole becomes a performance piece in itself. You sit (or, more likely, stand) in an attic, among 60 strangers, surrounded by wall-to-wall art (all of which is hand drawn/painted, and the audience is encouraged to contribute). You are no longer merely an observer but rather an integral piece of the puzzle. 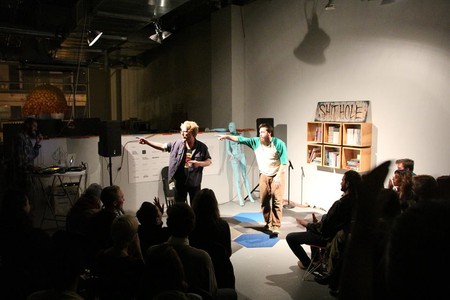 Over the past two years, The Shit Hole, founded by Zach Bartz and Kevin Gerrity, has evolved from its original shows, which were done in someone’s garage, into more than 230 shows all over the Chicago area. Everything runs as if it’s a finely tuned machine while maintaining the comfort that both performer and audience look for in a showcase or venue.

The inspiration for this endeavor stemmed from frustration with the Chicago improv scene for Bartz. ‘I wanted to move out here to do comedy, and now I’m in these spaces, and I’m, for some reason, I’m hoping a show gets canceled,’ says Bartz, at one of the locations for Shit Hole — an attic in Irving Park. Bartz and Gerrity channeled this anxiety and frustration into creativity: ‘Dude, let’s just do it. Let’s just do a show.’

Bartz and Gerrity freshened the scene not only through atmosphere, but also through advertising. ‘I don’t want to make Facebook events,’ says Bartz. ‘I don’t want to accost people to try to come to my show. I don’t need to memorize drink specials, to sell these people, and give them an incentive to see my show.’ A ‘word-of-mouth’ mentality has allowed this small show grow into a big underground Chicago scene. The process allows it to keep growing. ‘Everyone who’s here is here for the show, and they’re all about intentions. It’s not about content, it’s about intentions.’

One thing that shouldn’t be overlooked is just how seriously Bartz and Gerrity take what they’re doing, and just how much thought and preparation goes into every single detail. ‘We’re not called “The Comedy Castle” for a reason,’ says Bartz. ‘You know, there’s an amount of expectations that go along. […] If I’m called “The Comedy Castle” people show up and are like, “Alright, man. I hope this is funny.” But if it’s called “Shit Hole,” you enter in a more joking fashion. You’re like, “Yeah, Shit Hole. So hopefully this is good.” And then you find out that it’s a tight-knit show that’s a machine.’ 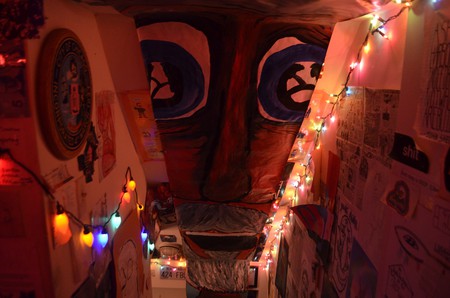 ‘Walls of The Shit Hole’ | courtesy of Zach Bartz

Also of note is the art on the walls. This is another chance for the audience to engage, creating an eccentric and fresh vibe that feels ‘cutting edge’ while remaining inviting. The art does more than just showcase the work that Bartz puts into all of his paintings and his drawings. It represents what The Shit Hole is all about; the audience is encouraged to contribute to the art. ‘Having the art of all of the audience members/performers/artists represents Shit Hole’s want to showcase and represent everyone who is passionate, prepared, and bold enough to show the work they care about,’ says Bartz. ‘Showing art at Shit Hole represents Shit Hole’s focus on boosting artists’ ownership of their work.’

Claire Friedman, one of The Shit Hole’s frequent performers, described the atmosphere. ‘No one leaves without feeling appreciated just for being there. It’s an extremely, extremely complimentary crowd, which can be death for good feedback, but I’ve also done a lot of my best performances there. I don’t know why. I just like being there.’

‘People come with a level of enthusiasm already,’ says Mike Gifford, another frequent performer at The Shit Hole. ‘I think that’s sort of the evolution is, is that in order for things to sustain and grow, they can’t stay the same, […] thus making more people interested in wanting to perform there.’

‘It’s got the DIY feel with a bunch of dudes that work really hard to get the right type of audience,’ says Cleveland Anderson, another performer.

With all of the praise surrounding The Shit Hole, it’s easy to forget the reason behind this venture, but Bartz and Gerrity haven’t. ‘For Shit Hole, we stick to the soul of what we’re trying to do. We make art, we don’t make audiences. We are sincere, we are not trying to do this to compete with anybody,’ says Bartz. ‘The big quote that we follow is a Basho quote, which is “Do not seek to follow in the footsteps of the wise. Seek what they sought.” All we’re trying to do is make good work with good people. My whole dream, as an artist, is that I would be able to go to different shows and spaces […] and have that sort of connection to perform.’
By Andrew Buss