Chicago residents will argue that their city is second (or third) to none in everything from pizza to sports to public transit. But while these allegiances err on the side of subjective, Chicago is indisputably the birthplace of skyscrapers and one of the most beautifully constructed cities in the world. The entire metropolitan area boasts historic, stunning buildings; it is the Loop’s bevy of famous ‘supertalls’ that sets Chicago apart from the pack.

Building
Willis Tower | courtesy of Wikipedia
No surprises here — the Willis Tower is easily the most recognized building in Chicago, and one of the most well-known around the globe. Completed in 1973, it earned the title of tallest building in the world, holding onto that record until 1998. Today it’s still the second-tallest in the United States and is mostly referred to as the Sears Tower by Chicago residents, which was its name until 2009.
More Info
Open In Google Maps
233 South Wacker Drive, Chicago Loop, Chicago, Illinois, 60606, USA
+13128750066
View menu
Visit website
Visit Facebook page
Send an Email
Give us feedback

The John Hancock Center is often seen as Chicago’s second-tallest tower, even though the Aon Center and the Trump Tower are both taller. It is similar in design and functionality to the Willis Tower, and was even built first, in 1969. Many claim the John Hancock has a better skydeck attraction than the Willis because of its position in River North and close proximity to Lake Michigan, offering better panoramic views of the city. 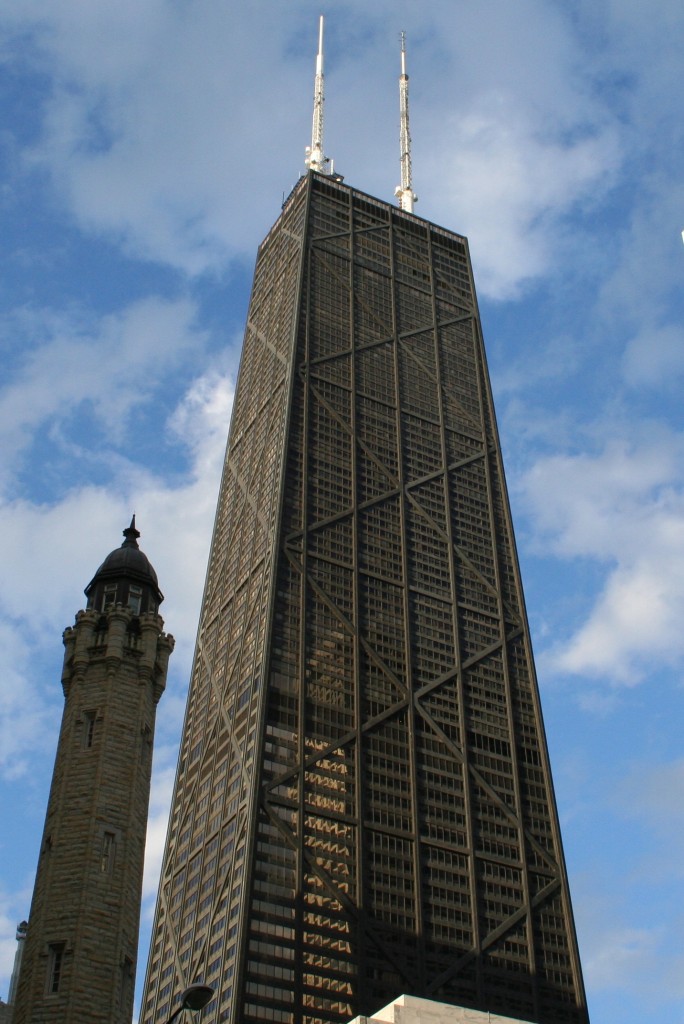 Chicago Board of Trade Building

Building
The Chicago Board of Trade Building houses the city’s oldest futures and options exchange | © Felix Lipov / Alamy Stock Photo
At its inception in 1930, the Chicago Board of Trade Building was the tallest building in the city. This soon changed, but it has remained a powerhouse of Chicago architecture and a major feature of the city’s Art Deco legacy. Features include black and white marble and a 30-foot tall statue on its roof of Roman goddess Ceres. It sits at the epicenter of Chicago’s financial district and houses a building population of over 5,000.
More Info
Open In Google Maps
141 West Jackson Boulevard, Chicago Loop, Chicago, Illinois, 60604, USA
+13124357180
View menu
Visit website
Visit Facebook page
Send an Email
Give us feedback

Building
Merchandise Mart | courtesy of Wikimedia Commons
Like the CBOT above, The Mart also opened in 1930 and broke records as the largest building in the world in terms of surface area, with its four million square feet of floor space. The building is so large that it was assigned its own zip code until 2008 and has a CTA “L” stop directly connected to the interior. It too is representative of Chicago’s popular Art Deco legacy, and is used mostly for wholesale showrooms and office space.
More Info
Open In Google Maps
222 West Merchandise Mart Plaza, River North, Chicago, Illinois, 60654, USA
+18006776278
View menu
Visit website
Visit Facebook page
Send an Email
Give us feedback

Known affectionately as “the corn cobs” around Chicago, these twin scalloped-edge towers alongside the Chicago River are the original template for mixed-use, high-rise buildings. By offering apartments for rent, condos for purchase and commercial space for hire, multi-faceted skyscrapers began to catch on in the following years. Marina City opened in 1964 and has been a fixture of Chicago architecture ever since. 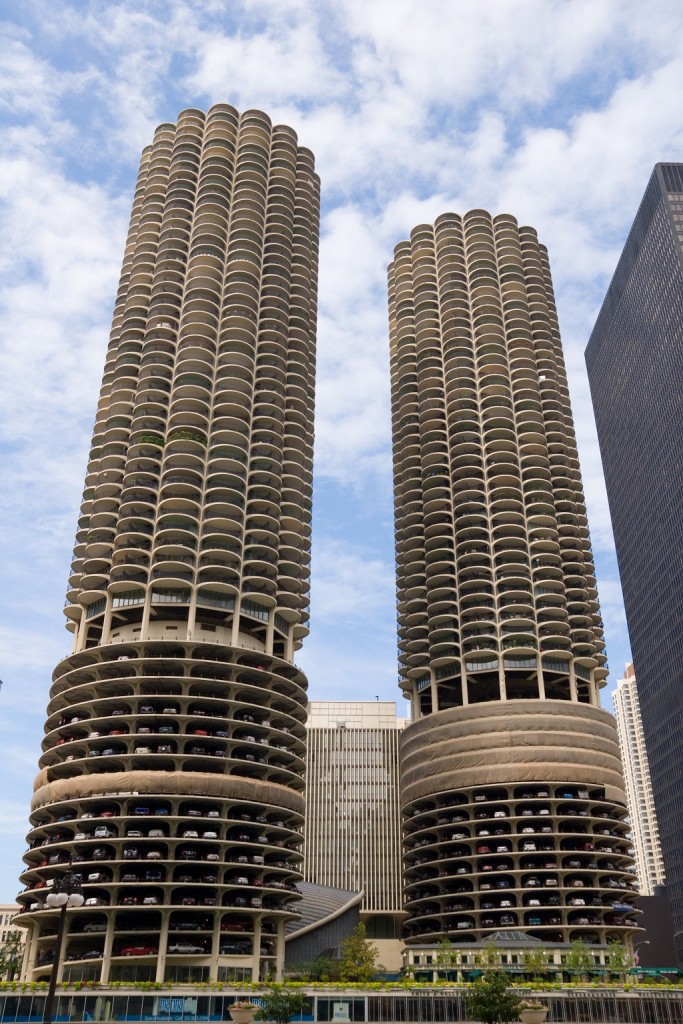 Building
The Wrigley Building | courtesy of Wikipedia
Just across Michigan Avenue sits the Wrigley Building, originally built to headquarter the Wrigley Company, and known as Chicago’s first air-conditioned building. The dual-towered skyscraper was opened in 1924 and nods to French Renaissance style. Today dozens of businesses and retail shops call it home and it remains one of the most beloved buildings in Chicago. At night the towers illuminate in floodlights and the two-story clock is visible to all.
More Info
Open In Google Maps
400-410 Michigan Avenue, River North, Chicago, Illinois, 60611, USA
+13122298941
View menu
Visit website
Visit Facebook page
Send an Email
Give us feedback

Building
Chicago Water Tower | courtesy of Wikimedia Commons
The Water Tower is Chicago’s oldest known building and is the only structure that survived the Great Chicago Fire of 1871. Built in 1869, it sourced clean water from nearby Lake Michigan to use for fighting fires. But today you can visit it as a cultural venue that showcases art and photography exhibits.
More Info
Open In Google Maps
806 Michigan Avenue, Streeterville, Chicago, Illinois, 60611, USA
+13127420808
View menu
Visit website
Visit Facebook page
Send an Email
Give us feedback

Building, Park, Spa
Lake Point Tower | courtesy of Wikimedia Commons
Known for its unique curved shape and unusual position in the Chicago skyline, Lake Point Tower has offered affluent Chicago residents the best of every world since 1968. It exclusively caters to residential needs – packed with restaurant, spa and park amenities whether you rent or buy – and enjoys a rare status as the only skyscraper to be built east of Lake Shore Drive, giving it the absolute best views of Lake Michigan in the city. Famous residents include Sammy Sosa, Joakim Noah and Goldie Hawn.
More Info
Open In Google Maps
505 North Lake Shore Drive, Chicago, Illinois, 60611, USA
+13124670505
View menu
Visit website
Visit Facebook page
Send an Email
Give us feedback

Building
Aqua Tower | courtesy of Flickr: Julen Iturbe-Ormaetxe
Opened in 2010, The Aqua Tower is by far the youngest building on this list. But its wave-like exterior sets it apart from any other recent Chicago skyscraper, deserving its inclusion amongst its 20th century counterparts. Its flowing, abstract design was intended to give residents a unique view of the surrounding city and also offer different-sized curved balconies. With Jeanne Gang as lead architect, Aqua is the third-tallest building in the world designed by a woman, and the tallest designed by a woman-led firm.
More Info
Open In Google Maps
225 North Columbus Drive, Chicago Loop, Chicago, Illinois, 60601, USA
+13122782782
View menu
Visit website
Visit Facebook page
Send an Email
Give us feedback
Mon - Fri:
9:00 am - 6:00 pm
Sat:
10:00 am - 5:00 pm
Sun:
11:00 am - 5:00 pm
Give us feedback