An Introduction To Chicago's Greektown

Chicago’s Greektown, though small, packs a mighty punch when it comes to world-class food and nightlife just West of the Loop.

The Greek delegation in Chicago came into being following the Great Chicago Fire of 1871. They helped rebuild the city and settled into the West Loop, originally occupying a much larger area than today. After the University of Illinois at Chicago (UIC) had taken hold of the West Side scene in the 1960s, the Greeks were forced to downsize and relocate. Many moved to other neighborhoods such as Ravenswood, Lincoln Square, and even nearby suburbs. But their strongest representation remains in a five-by-two-block area along Halsted Street, just West of the Kennedy Expressway. Sometimes overlooked, it’s just a short walk from major Chicago landmarks such as the Willis Tower and Union Station. 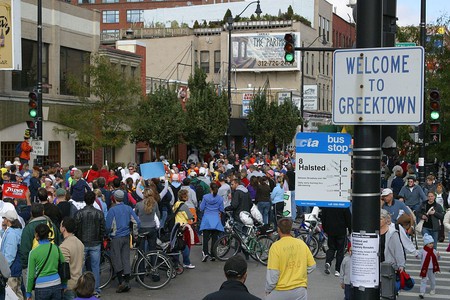 The neighborhood’s tiny size has created a close-knit community, and it is packed full of history and culture. After all, Chicago’s old Greektown was the main attraction for Greeks on American soil. At the turn of the 20th century, it was the original Greektown neighborhood in the United States. Today, the community maintains that proud past with the National Hellenic Museum, which opened its doors on Halsted Street in 2011, with over 17,000 artifacts detailing thousands of years of Greek history. Visit through September 30th 2016 to feed your Olympic fever with a look at their current exhibit, Olympic Revival: The 1896 Olympic Games. The museum offers free tours of exhibitions with regular admission and consistently hosts educational programs for members and the public alike.

Don’t let the neighborhood’s size worry you about a shortage of Greek food in the area. This drag of Halsted Street is jam-packed with authentic Greek cuisine, ranging from all-night gyros to five-course dining experiences. Working from north to south, your options include: 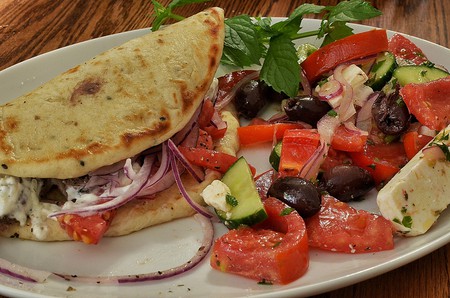 And if all that food doesn’t quite satisfy your Greek culture craving, join the neighborhood in its annual Taste of Greektown, coming up on August 26-28, 2016. During the weekend, visitors can enjoy 50 percent off admission to the National Hellenic Museum and all the food you can eat. Participating neighborhood restaurants will offer special dishes and deals on their fare, and the festival will also include plenty of live Greek music and family activities for all.