A History of the Chicago River's Revival 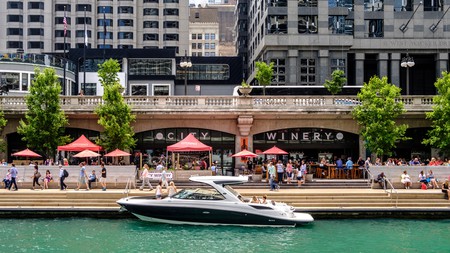 If the sun’s out, you can bet Chicago boaters are cruising along the city’s historic river under the watchful gaze of towering skyscrapers. Juxtaposed with urban architecture, the turquoise water makes for an exclusive escape right in the middle of all the hustle and bustle. Boaters have long been able to view the city from this unique perspective, but now, a revamped pedestrian walkway is creating a whole new scene along the Riverwalk.

What used to be a desolate footpath connecting the Chicago River to Lake Michigan has transformed into an award-winning urban oasis, complete with lush foliage, art installations and, most recently, a caravan of fine-dining restaurants.

The main pathway spans 3.4 miles from Lake Shore Drive to Lake Street. Originally used as a shortcut by Native Americans to reach the Great Lakes, the route had advanced into a freight and shipping canal by the late 1800s; soon, industrial waste turned the water into a rancid stream of filth and grease. In 1889, the Sanitary District of Chicago voted to reverse the direction of the river, allowing clean lake water to flow in and subsequently redirect the city’s sewage away from the lake in a project noted as one of the greatest American feats of civil engineering. By the 1960s, the river was back in peak form, playing host to popular boat tours as conversations about environmentalism and sustainability buzzed. 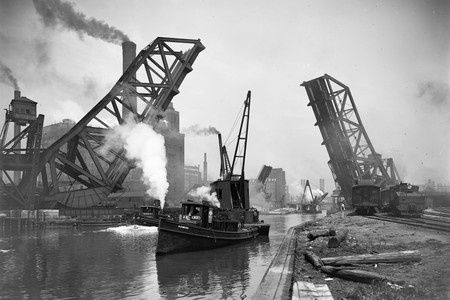 A steamboat makes its way along the Chicago River (c. 1900) | © Granger/Shutterstock

But the path along the river still wasn’t exactly somewhere people went to hang out. Run-down and desolate, it was left unbothered for years. That began to change in the late ‘90s when the city re-initiated a project to turn the path into a space to accommodate pedestrians, with construction on Wacker Drive making that possible, followed by the completion of a fragment at Michigan Avenue and Wabash in 2005 and a strip connecting the river’s west side to the lake from Ogilvie Station in 2011. Originally envisioned as being unified by a walkway of restaurants, retail space, boat docks, bike and kayak rentals and even a swimming hole in famed architect Daniel Burnham’s 1909 Plan of Chicago, the Riverwalk project was never finished. Mayor Rahm Emmanuel made it his mission to ensure completion during his eight years as mayor, and in 2013 the project received a $98 million loan.

“To our former mayor’s credit, there was no dining scene on the river five years ago,” says Jerrod Melman, executive partner at Lettuce Entertain You, a restaurant group opening three new restaurants along the river this year. “He really transformed the entire riverfront and saw it as an opportunity to engage another body of water in the city and make it a desirable place to dine and hang out.” 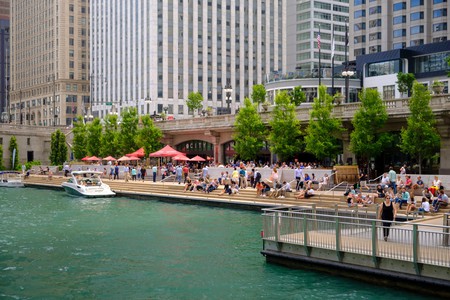 A few steadfast spots did stake their posts before the revamp was fully kicked into gear. City Winery was one of the first to bring a posh vibe to the walkway when it opened in 2015 with wine on tap, made on site and poured directly from the barrels in their cellar. Another early outpost was River Roast, a contemporary spin on British food, which opened in 2014 after two other concepts had failed in the same space. Later that year, Kimbal Musk, (yes, Elon’s brother) opened The Kitchen with a farmhouse feel. Then came more stylish spots: Gibsons Italia in the fall of 2017 and Beatnick on The River in summer 2018. The fine-dining options continued to cruise in with the 140-foot Odyssey River Boat setting sail in 2018, flaunting floor-to-ceiling glass windows and hosting year-round dinner cruises on a European-inspired vessel. No one beats steakhouse Smith & Wollensky, which opened in 1998, long before the pathway was anywhere worth visiting.

There are at least nine more dining spots planned to hit the Riverwalk this year, and the swankiest new concepts hail from Lettuce Entertain You in a partnership with Bill and Giuliana Rancic. In early July, the team debuted their airy ode to the Italian coast with Pizzeria Portofino, the first of three new river posts from the illustrious Chicago restaurant group. RPM on The River and a wedding venue, RPM Events On The Water, are under construction and plan to open this fall. 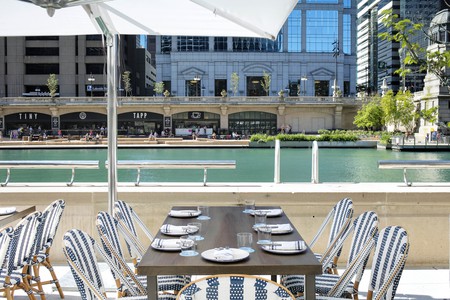 Pizza Portofino is a new venture along the river | © Melissa Hom

The river is more than a fine-dining playground; over 20 businesses call the pathway their front doorstep, from tiki bars to kayak rentals. This aligns with Burnam’s original Plan of Chicago, which was broken up into six phases, many of which began but were never completed. So far, the $98 million loan has funded the construction of recreational corridors between each bridge spanning five blocks from Franklin St. to State St. Each section is named, moving east: The Marina, The Cove, The River Theater, The Water Plaza, The Jetty and The Confluence. Active construction confirms that improvements to update the five remaining blocks east towards the lake are currently underway. 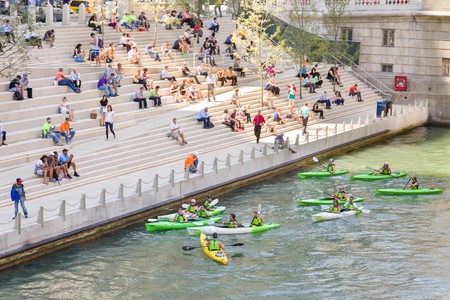 Many of the newer restaurants offer dual walk-up access from the Riverwalk and the street level. The big players ensure plenty of indoor seating for the winter months, and City Winery introduced heated “river domes” to make up for a lack of indoor space. Commuting is also a feature of the scenic path, but a pending bike ban positions fast-moving cyclists as a safety hazard. “Its biggest challenge is using the limited space to support its popularity, the classic ‘good problem’,” says Michelle Woods, assistant project director for the Riverwalk. As with any innovation, a period of adjustment follows. “Construction along the Riverwalk has led to some challenges,” shares Brooke Webster, general manager at City Winery on the Riverwalk, “but ultimately, these improvements will make the Riverwalk even more welcoming.” 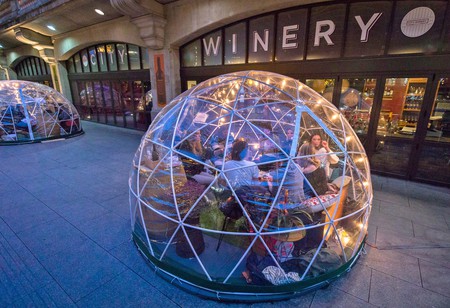 Although many of Burnam’s improvement ideas never became a reality during his lifetime, Rahm Emanuel’s Plan of Chicago serves as a contemporary update. “The amount of private investment surrounding the Chicago Riverwalk is notable,” points out Woods. “Several multi-million dollar projects are under construction now along the stretch of the main branch including, Wolf Point, River Point, Wanda Vista Tower to name a few.”

It’s obvious that big-time investors are looking at the river like never before, largely thanks to its forward-thinking design and the positive reaction from tourists and locals alike. Thanks to the city’s support, a lushly designed path now runs uninterrupted for 1.25 miles along the main branch. Burnam’s vision might not have forecasted Michelin-star chefs cooking for packed happy-hour patios, but the provisions are flowing and the night is still young. 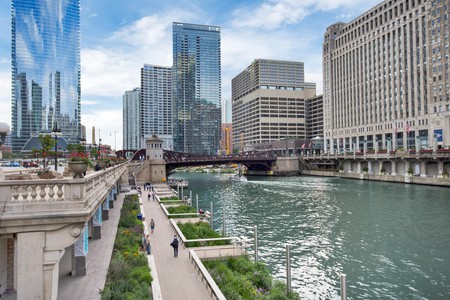