A Cyclist's Guide to Chicago, IL 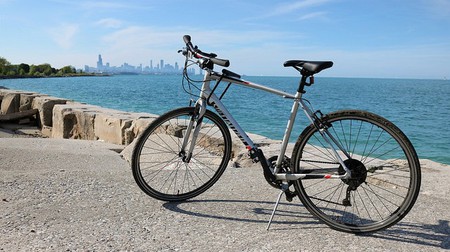 Cycling is a big part of Chicago’s transportation system, and plans are in place to make it even more so. The Chicago Streets for Cycling Plan 2020 hopes to establish roughly 645 miles of additional cycle-centric facilities and routes over the next two years. Between the leisurely trails, guided tours, and long-distance rides, any cyclist will feel at home in Chicago.

All Chicago resident and visiting cyclists should know about Divvy. Since 2013, the Chicago Department of Transportation has operated this bike sharing system within city limits. In 2016, CDOT added nearby Evanston to the network. Today, more than 570 docking stations provide locals and tourists with 6,000 bright blue bicycles. 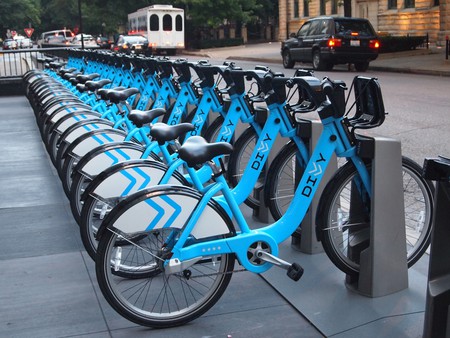 The bikes’ aluminum frames (which shelter the braking mechanism from harsh elements), adjustable seats, and ergonomic handlebars make riding comfortable and optimal for sightseeing. Fully equipped with reflectors, front baskets, and safety bells, Divvy bikes are exciting alternatives to cabs and public transportation. Divvy allows users to pick up from one dock and park at another. Just $3 buys 30 minutes of ride time; $15 day passes are also for sale (and the best option for vacationers). Convenience is really the name of the game: passes are available for purchase at any docking station kiosk.

If lounging on the beach is your goal, there’s really only one trail you need to know about. The Lakefront Trail along Chicago’s Lake Michigan shoreline provides cyclists with 18.5 miles (30 km) of paved pathways, including newly designated lanes for bikers. There’s a wealth of beaches to choose from along the trail. The southern-most option is 63rd Street Beach in Jackson Park, which boasts a historic, classic revival-style beach house and an entrance to the Lake Michigan Water Trail for kayaks and canoes. The northern-most beach, Foster Beach in Edgewater, has a concession stand and a large, expansive sandy area perfect for lounging (it’s also right next to a dog beach for those who bike with pups).

Between these two hotspots are eight additional beaches bikers can pop off the Lakefront Trail to visit. The incredible views of Chicago’s skyscrapers and harbors make biking this stretch even more beautiful. Too hot to sunbathe? Stop at the Lincoln Park Zoo, the chess pavilion at Ohio Street Beach, or the bird sanctuary next to Montrose Harbor.

Any cyclist knows pedaling works up an appetite. These trails and tours are perfect if you’re itching for a taste of delicious Chicago grub and want to earn it on a bike. Start with The 606, an abandoned rail line turned pedway for bikers, walkers, and ‘bladers. There are ten access points along the 2.7 mile (4.3 km) trail, which runs above Bloomingdale Avenue between Ashland and Ridgeway through Bucktown, Humboldt Park, Wicker Park, and Logan Square. Favorite eateries such as Small Cheval, Parson’s Chicken and Fish, Handlebar, and Ipsento 606 are all within a few blocks of the trail. 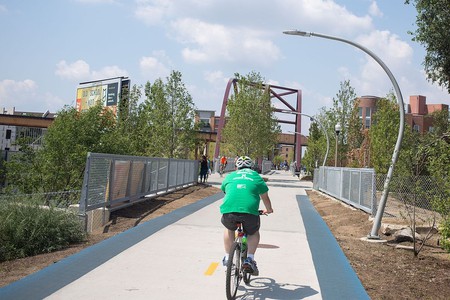 For a more structured experience, Bobby’s Bike Hike offers two unique Bikes, Bites & Brews Tours. Over the course of four hours, the group travels 12 to 13 miles (19 to 20 km) tasting traditional Chicago fare and beverages along the way. Some highlights of the Westside Foodie Tour are Rick Bayless’ brewery Cervecerìa Cruz Blanca and Chicago staple The Bucktown Pub. On the Signature Dishes tour, participants will taste deep-dish pizza, Chicago-style hot dogs, and local craft brews. This is an awesome way to check out various neighborhoods and cuisines in a single day.

Yes, Chicago is a bustling metropolis. But sprawling fields and dense forests are just a bike ride away. Part of the Forest Preserves of Cook County, the North Branch Trail offers 33.5 miles (54 km) of paved and unpaved terrain for riders. Starting in northwest Albany Park, the trail runs north along the Chicago River to Glencoe (where it meets the Green Bay Trail, for anyone interested in continuing the journey). Cyclists can access picnic areas and the Chicago Botanic Gardens from the North Branch Trail. 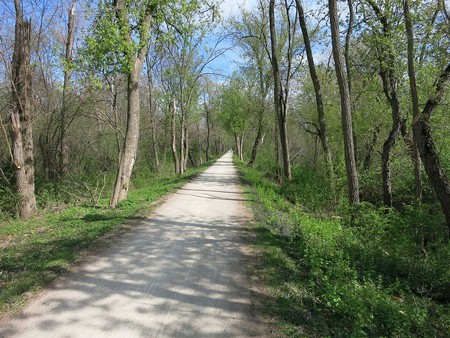 The Elgin Branch of the Illinois Prairie Path is surrounded by lush forest. | © Djmaschek / WikiCommons

The Illinois Prairie Path is known for being the first rail-to-trail operation in the U.S. In the 1960s, teams converted the Chicago Aurora & Elgin electric railroad into 61 miles (98 km) of nature routes for walkers, bikers, and non-motorized vehicles. Three main trails converge in Wheaton, IL. From Chicago, the closest entrance point is in Forest Park, on the west side of the city. There are Forest Preserve hiking trails along the main bike route and parks perfect for pitstops. Plus, as its name suggests, tons of prairie flora and fauna to appreciate.

Chicago’s street art scene is astonishing and becoming more popular by the minute. Cyclists have noticed. Several groups now offer organized tours of the Windy City’s best outdoor murals and (literal) street art. For instance, the Pothole Art Bike Tour takes cyclists on an urban adventure to view artist Jim Bachor’s pothole installations. Bachor started filling Chicago’s notoriously deep and dangerous potholes with tile mosaics in 2013. His work features beautiful—and sometimes funny—images of flowers, popsicles, labels, and more. Perks include a lunch break for empanadas and the artist himself biking next to you. 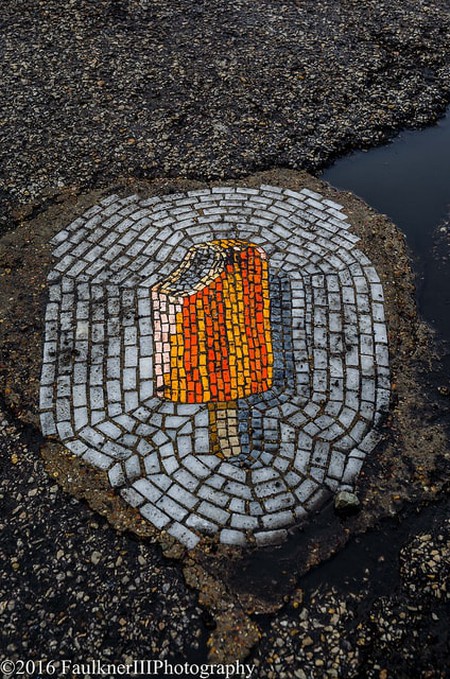 The Graffiti and Gears Cycling Tour offers 10-, 25-, and 50-mile (16-, 40-, and 80-km) route options, each with expertise from a knowledgable source. Gabriel Carasquillo, who has documented Chicago street art for 35 years and runs Chicago Graffiti Forums, a site used to teach street art history and techniques, leads the tour. Stops include the Pilsen Mural Wall, The Mile of Murals, and the Vivian Maier Mural, all of which feature well-known artists from around the world. Bikers will also get a glimpse of lesser-known works around the city only locals can find.

Around 5:30 p.m. on the last Friday of every month, year-round, cyclists from Chicago gather at Daley Plaza in the Loop with their bikes. At 6 p.m., everyone starts pedaling. The bikers (which can number into the thousands on a good day) wind through the city, covering about 12 miles (19 km), and sometimes more, all in the name of cycling. The monthly event has been a tradition since 1997, when Chicago was a much rougher place for bike riders. Critical Mass got its start in San Francisco in the early ’90s as a means of making cycle culture more visible and as a way to actively protest the dominant car culture. Today, the Midwest group rides have a decidedly positive vibe; participation is free and kids are encouraged to join. Regulars have gone on to advocate for bike culture in cities around the world and help Chicago improve amenities for its many cyclists. 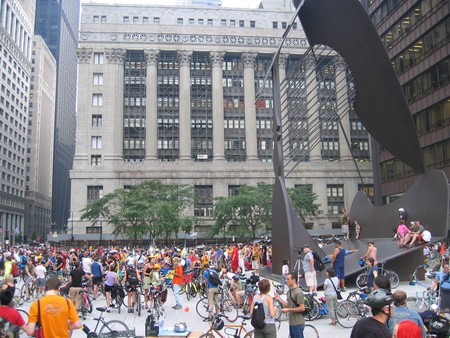 Whether you’re in the market to buy gear, attend a class, or simply scope out Chicago’s cycle scene, these are the city’s best shops for all things bike. West Town Bikes and Ciclo Urbano make up a dual bike shop and community outreach center in Humboldt Park. While the full-service shop repairs damaged bikes, youth programs teach Chicago’s kids life skills through bicycles. Independence, responsibility, and trade skills are just the tip of the educational iceberg at WTB. There are several biking clubs young people can join, not to mention the internships and apprenticeships available. Adults can visit on Open Shop night to tune up their rides and hang out with other members of the local cycling community. There are also bike building classes and a monthly Women and Trans Night for female-identifying and trans cyclists.

If there’s something wrong with your bike but it’s unclear what, stop by Comrade Cycles. The incredibly knowledgable staff offers free assessments and estimates. Customers can also invest in a brand new bike build, if inspiration strikes. No question or fix is too small or large for Comrade Cycles; they offer the same level of care to hand-me-down bikes and Tour de France winners. All of the store’s owners also work in the shop, which has become a fixture in Chicago’s cycling community.