A Brief History of the National Museum of Mexican Art, Chicago 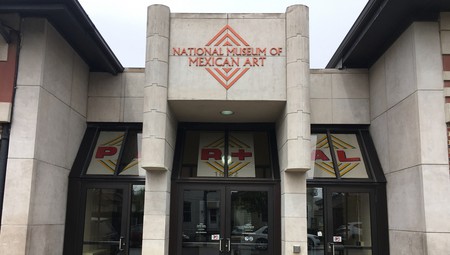 Located in the heart of Pilsen, a Mexican-American neighborhood full of art and murals in the Lower West Side of Chicago, the National Museum of Mexican Art is celebrating its 30th anniversary in 2017, and there’s never been a better time to explore one of the largest collections of Mexican art in the country.

The museum was the brainchild of Carlos Tortolero, who came to Chicago from Mexico as a small child and worked as a history teacher, counselor, and administrator in the Chicago Public School System for many years. In 1982, with only $900 between them, Carlos and several friends founded the Mexican Fine Arts Center Museum with a series of cultural events and art exhibitions in temporary spaces, committed to creating an organization dedicated to accessibility, education, and social justice.

In 1987, the museum moved to its permanent home in Harrison Park, Pilsen, and expanded to its current 48,000-square-foot (4,459-square-meter) space in 2001. In 1997, it became the first Latino museum accredited by the American Alliance of Museums (AAM), and the name of the museum was changed to the National Museum of Mexican Art in December 2006 in recognition of its status at the time as the only member of the AAM dedicated to Latino culture.

Its four galleries house a permanent collection made up of more than 10,000 artworks and historical artifacts from the past 3,000 years, including textiles, photography, paintings, and sculptures. An annual highlight is the museum’s celebration of the Día de los Muertos (“Day of the Dead”) in autumn, and 2016 saw the 30th such exhibition held in Chicago. Other notable past exhibitions have included The African Presence in Mexico and Frida’s Contemporaries: Women Artists of Modern Mexico, which went on to tour the country and Mexico.

The museum is open Tuesday to Sunday from 10 am to 5 pm, and admission is free, though it relies on donations, so be generous. It’s easily accessible from the Loop on the Pink Line, just get off at the 18th Street stop. Find out more about the museum’s current exhibitions here.