A Brief History Of Chicago's Great Fire Of 1871 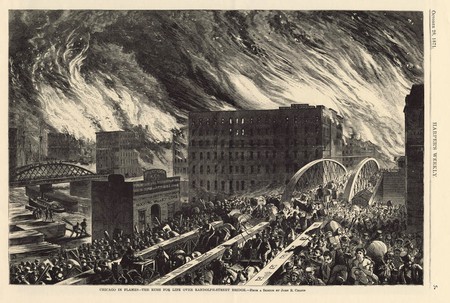 Back in 1871, Chicago looked nothing like it does today. In fact, almost two-thirds of the buildings in Chicago were made of wood, while most of the buildings had very flammable roofs made of tar or shingles. The Chicago Fire of 1871, also known as The Great Chicago Fire, began on October 8th and lasted until October 10th of 1871. It was a Sunday evening when a fire broke out in the O’Leary’s barn (137 DeKoven Street), which was located by Little Italy on a map today. It’s a myth that it started because a cow tipped over a lantern in the barn, but realistically, it’s noted that Catherine O’Leary was deemed as the perfect scapegoat. The fire spread so quickly that it created a massive wall moving at about 100 miles per hour. This fire wall created tornado-type winds, causing houses to be tossed in the air, and beach sand turned into glass due to the tremendous forces of heat.

After two days of raging, uncontrollable fires, rain finally began to fall, leaving 3.3 miles of Chicago, Illinois in complete devastation. There were over 300 people dead, 100,000 people homeless and more than $200 million of destroyed properties. While this was a horrific tragedy for Chicago, it was also recognized as one of the most spectacular events of the 19th century. This fire was a prime milestone in the city’s history because it brought back significant reconstruction efforts, spurring considerable economic development and population growth. 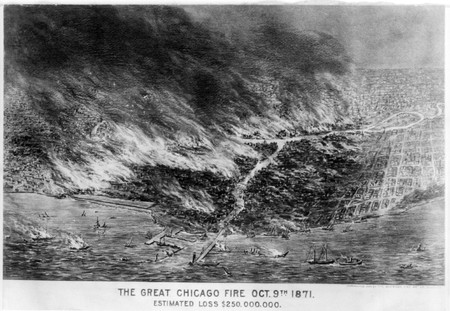 Although the fire had damaged vast amounts of land, along with the spirits of the locals, some of Chicago’s physical infrastructure remained intact, like the transportation systems. Architects began laying the foundation for a modern city and were ready to create the world’s first skyscrapers. Within the next five years, the population of the city nearly doubled. By 1890, the city had a population reaching more than one million people, making it the second largest city in America. 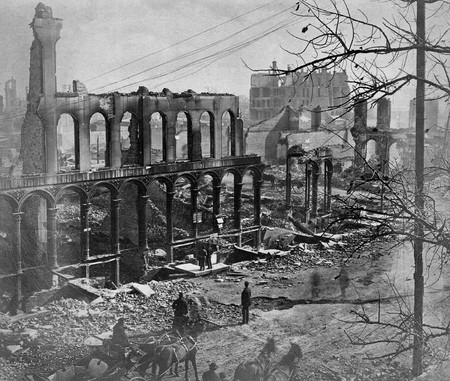 Today, there are still three large buildings in the affected area that were able to be repaired. These buildings include the Chicago Water Tower, St. Michael’s Church, and the Chicago Avenue Pumping Station. The Chicago Fire Department training academy is located on the site of the O’Leary property where the Great Chicago Fire started. Finally, in 1997, the Chicago City Council passed a resolution that exonerated Catherine O’Leary of her (and her cow’s) accusation of starting the fire.