A Brief History Of Chicago's Flamingo 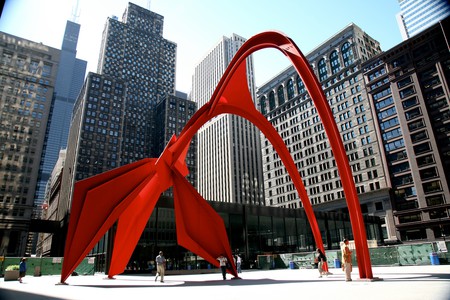 Chicago is an incredibly artistic city, and there are a few structures that stand out in particular, especially Alexander Calder’s Flamingo. The Flamingo is the anchor of the rectangular plaza in the Loop, and this plaza of federal buildings was all designed by Mies van der Rohe. This sculpture is made of steel and glass and shares certain design principles with its surrounding architecture. The open design allows all tourists and viewers to walk under the sculpture, and like the Cloud Gate, it’s also considered a prime photo destination if you’re just in Chicago for a quick work trip.

The Flamingo was created by Alexander Calder and was unveiled in 1974. Standing at 53 feet and weighing 50 tons, it’s not a subtle piece of art. It received its bright color, which is called ‘Calder Red,’ to offset the dark, steel office buildings nearby. This sculpture was commissioned by the US General Services Administration as a flavorful piece to go in front of the Kluczynski Federal Building. This was the first work of art every commissioned by the GSA under the federal ‘Percent for Art’ program that allocates a percentage of the project’s budget to public art.

Alexander Calder was asked to design it because of his well-established, international reputation. In April of 1973, he unveiled the model at the Art Institute of Chicago, and in October of 1974, the sculpture was presented to the public for the first time. Calder’s sculpture is a prominent example of the constructivist movement, which was first popularized in Russia in the 20th century. Constructivism refers to smaller pieces that are joined together to form a piece of art. Calder’s Universe mobile was also unveiled at the Willis Tower at the same time as the Flamingo sculpture. Therefore, October 25, 1974 was called ‘Alexander Calder Day,’ and the day featured a circus parade. 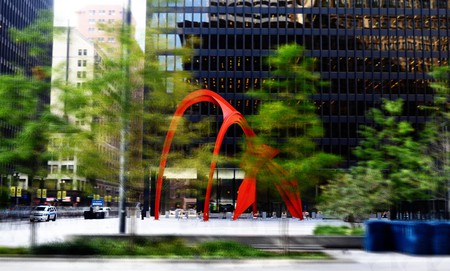 © Mike Warot/Flickr
Give us feedback