A fantasy-inducing segment of “In Dreams.” | © Doug Pitorak
Although Pilsen’s 16th Street Murals rightfully receive praise, one can find stunning street murals all across Chicago. North-side neighborhood Rogers Park is no exception. Between the Mile of Murals initiative and the 2010 Mass Underpass Murals competition, you’ll be hard pressed to walk a block in Rogers Park without some great public art catching your eye. Here are eight street murals you should go out of your way to see.

‘For the Benefit and Enjoyment of the People‘

An ode to the neighborhood, ‘For the Benefit and Enjoyment of the People,’ is a stellar introduction to Rogers Park’s street murals. In fact, artist Mitchell Egly said he had surrounding murals in mind when creating this work.
‘The mural was conceptualized to use design elements from the turn of the century with contemporary styles that reflect the history, mystique and flare of the neighborhood,’ Egly said in an interview. ‘The palette, composition and intricate details were used to complement the existing prismatic murals nearby, and moreover to unify the Rogers Park identity, which is full of local perspectives, complex ideas and overlapping viewpoints.’ 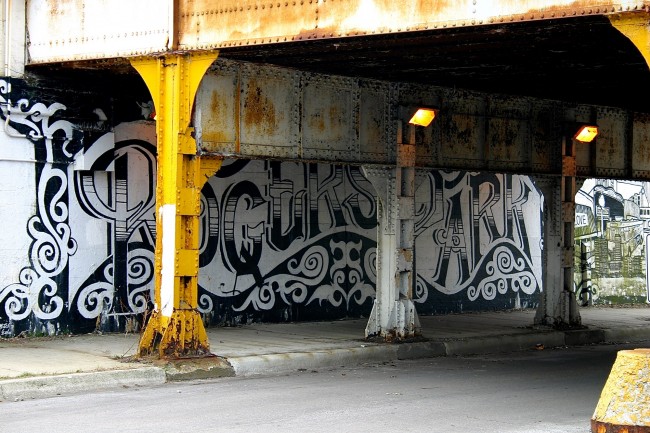 A partial view of ‘For the Benefit and Enjoyment of the People.’ | © Doug Pitorak

Across the street from Egly’s work is ‘In Dreams,’ a magical mural by artist Jennifer Cronin. ‘In Dreams’ was one of the proposed murals accepted for production in the 2010 Mass Underpass Murals competition. ‘This piece is about the beauty that we all have within us and the infinite capacity of the human mind and imagination to dream up something beautiful,’ Cronin said in an interview. Cronin added that she collaborated with artist Dan Bellini on ‘In Dreams.’ 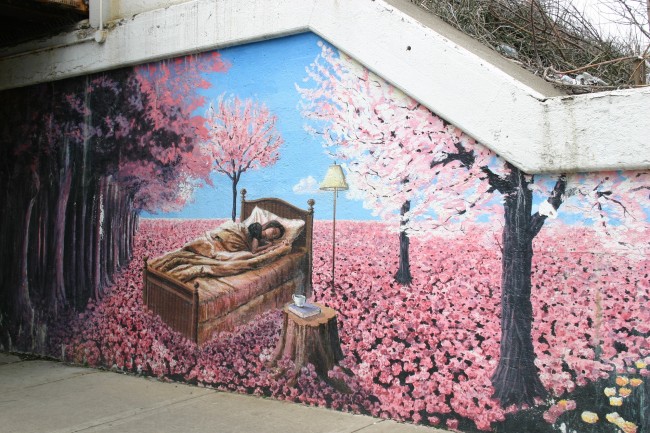 In this mural, artists Lea Pinsky and Dustin Harris collaborated on an effort to celebrate Rogers Park’s place in the world, as well as family and community. ‘In the mural, the father and daughter are sharing a memory of a visit downtown. The mandala signifies the center of the community and the center of the self. The IL cardinal, stars, and state outline signify place,’ Pinsky said in interview. ‘The arrows and the clock signify our movement in time, and the phrase ‘We Are Here, Our Time is Now’ inspires us to value this present moment and the world around us.’ 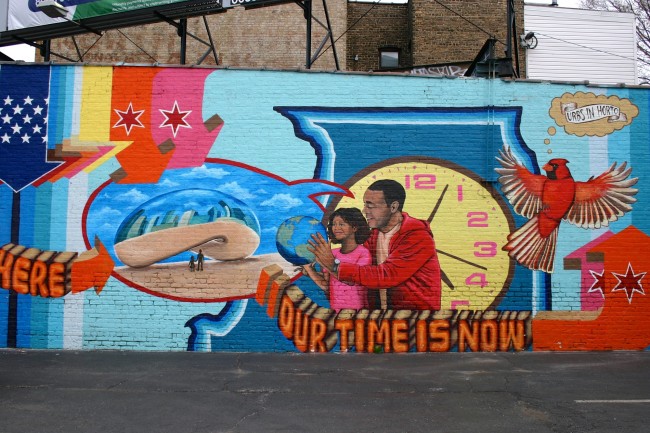 ‘We Are Here, Our Time is Now’ brightens up a Rogers Park parking lot. | © Doug Pitorak

Another work from the Mass Underpass Murals project, ‘Interrelation,’ has a strong political meaning. What inspired artist Jose Agustin Andreu? These closing words of the Declaration of Independence: ‘…we mutually pledge to each other our Lives, our Fortunes and our sacred Honor.’ ‘I wanted this mural to remind everyone that we all have a responsibility to our communities and our nation, and that we have already pledged our commitment when we agreed to partake our rights,’ Andreu said in interview. ‘Interrelation, emphasizes social diversity and unity in the complexity of its ripples. It is a resolution and a promise of harmony from variety and contrasts.’ 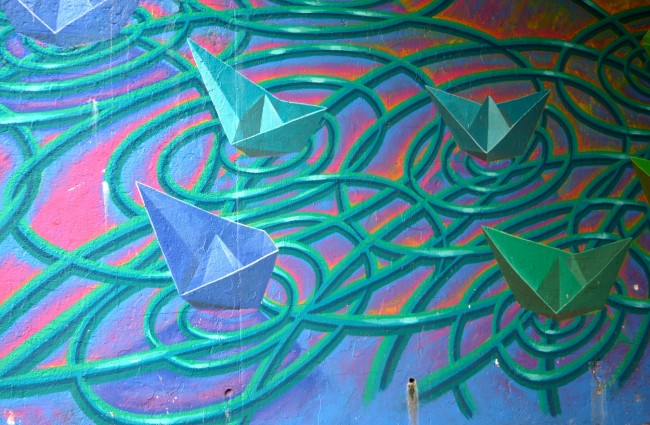 A close look at the mesmerizing ‘Interrelation.’ | © Doug Pitorak

Try to look at this mural and not smile. It’s hard! That should come as no surprise, as artist Shane Treacy intended ‘Rogers Park Shuffle’ to be fun. ‘The idea of the mural was to celebrate all the different people who live in Rogers Park,’ Treacy said in interview. ‘I really appreciated the diversity of the neighborhood. I wanted the mural to be fun and bright to liven up the dingy underpass.’ ‘Rogers Park Shuffle’ was the first mural Treacy created and was the first time painting in public for Treacy. 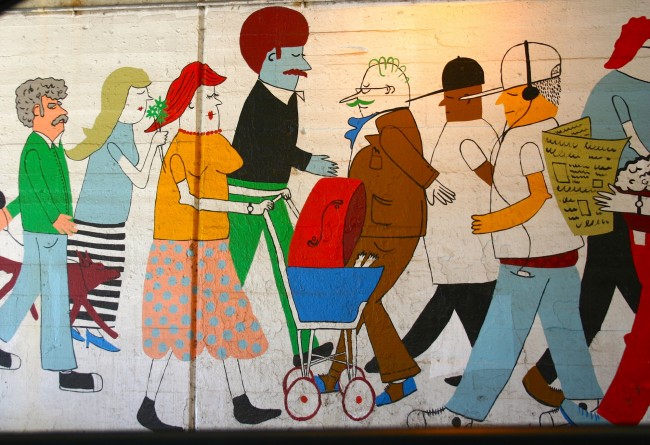 Hebru Brantley’s work — defined by its blend of modern pop art and Japanese anime — can be spotted all over Chicago. ‘Respiration’ is a bit of a hidden gem, tucked underneath the Metra tracks at Ravenswood and Pratt. It was completed in 2012 as part of the Mass Underpass Murals project. Brantley’s trademark goggle-wearing characters can be seen flying and riding atop trains. According to his website, Brantley’s art has been displayed in London, Switzerland, Miami, and elsewhere. He grew up in the Windy City in the 1980s. 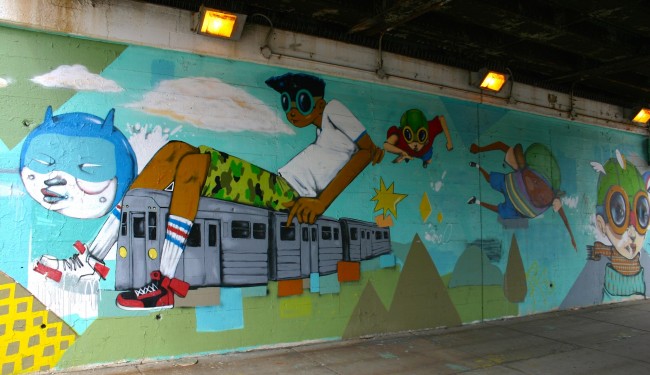 On the website of artist Molly Zakrajsek, a description of ‘Chicago Metra Mural’ informs that the art is 100 feet long and was completed with the help of Anne Vandevender, as well as ‘many friendly folks’ from Rogers Park. What is striking about this piece is its mosaic style, rich with texture and detail. The conception was a finalist at the Mass Underpass Murals competition. According to the 49th Ward’s Participatory Budgeting website, the vibrant mural was submitted with an alternate title: ‘Birds, Bugs, Butterflies and Beauty.’

Also chosen in the 2010 Mass Underpass Murals competition, ‘Urban Oasis’ is a funky, beautiful mural completed by artist Leah Tumerman. At first glance, one can see that nature coinciding with human-made habitat is a clear theme. Tumerman took it a step farther by implementing Rogers Park staples into the work. ‘The piece presents iconic neighborhood architecture, reimagined and integrated with the natural world,’ Tumerman said in interview. ‘The whimsical and vibrant streetscape attempts to brighten the underpass which serves as a major commute route for local residents.’ 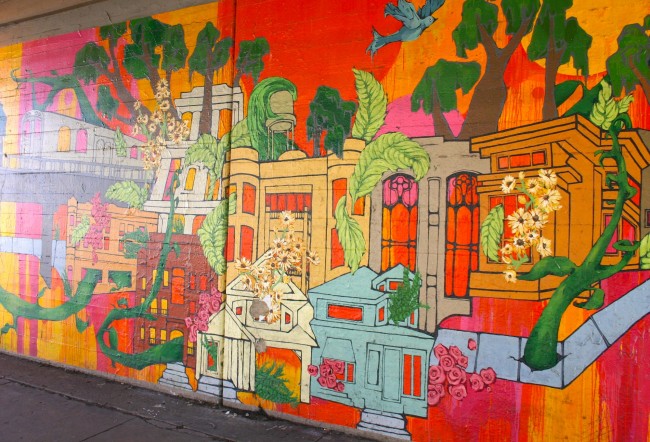