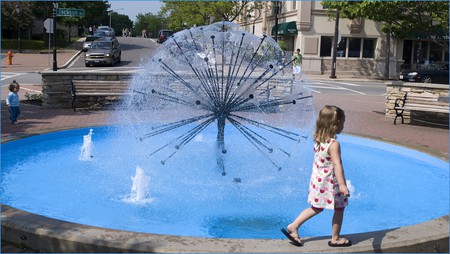 As the fourth-most populous and third largest city in Illinois, Naperville is up there with the heavy hitters. It’s less than an hour from Chicago by car or train, so there’s really no excuse for not checking it out. The downtown area is packed with shopping, dining, culture and nightlife to keep you busy for days, so check out Naperville’s highlights as seen on Instagram to help plan out your trip.

The Riverwalk goes right through the center of town along the DuPage River and is the most beautiful way to connect to nature in Naperville. It runs for nearly two miles and features paved paths, fountains, bridges, artwork, parks and cafes along the route.

Naper Settlement is a living 19th-century history museum spread across 12 acres in Naperville that includes 30 historic buildings. Come tour the village all year round, participate in their events and learn a little something about the area’s history.

Dreaming of being in a snug little cabin like this now!

A Daisy Tea Program is underway! The girls enjoy a very special Victorian tea party with their dolls. 🍰🎀 #girlscouts

Live music abounds in Naperville all year round. Check out the Naperville Municipal Band that plays free summer shows at Central Park and several winter concerts. The Wentz Concert Hall at North Central College pretty much covers everything else; they are the home to the DuPage Symphony Orchestra and also host a variety of performers. Try Pfeiffer Hall for smaller, more intimate concerts.

The stillness before the concert. Singing with the @dupagesymphony tonight! #womeninmusic #holst #singers #chicagochoral #architecture

In the summertime there’s no better way to spend an afternoon than cooling off at Centennial Beach, a Naperville fixture for 85 years that brings the authenticity of a coastline to the suburbs. Swim in the water (up to 15 feet deep) or play with the little ones in the sand.

Hanging out with coolest kids☀️☀️☀️☀️☀️

Commissioned in 2000 for the millennium, this open-air, 160-foot tower is open to the public in Riverwalk Park. Take a tour and climb the 253 steps to enjoy its panoramic views or just listen to the carillon’s 72 beautiful ringing bells.

I wanted to climb the 253 steps to the top so bad!! A staff person would have to come with me, and no one was too excited about joining me. So the elevator it was. #milleniumcarillon #mosertower #tower

Don’t worry about what to eat – Naperville has it all. Step away from the fast food chains and check out their diverse array of cuisine, with Potter’s Place for Mexican, Bangkok Village for Thai and Heaven on Seven for Cajun.

since when is downtown napes so lit?🏮 #fridaynightlights #rooftopbar

The center of downtown around Jefferson and Chicago Avenues is your nightlife destination. Check out Features for the local college hangout and Frankie’s Blue Room just upstairs for the best live music in Naperville. Visit Two-Nine to feel upscale and sophisticated like you’re anywhere but the suburbs. Also dip into Jackson Ave Pub and Quigley’s Irish Pub for some good, clean neighborhood fun.

Shindig! is about done with soundcheck, groovy music to follow!!! #livemusic #naperville #shindig!