Things to Do in the Gold Coast, Chicago 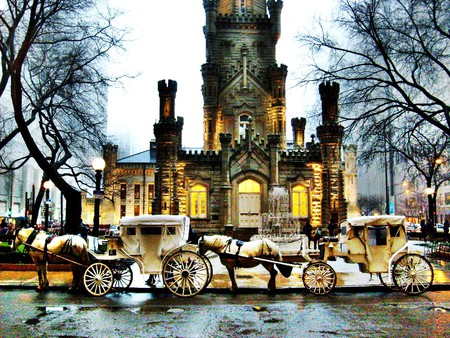 When Chicago millionaire Potter Palmer built his mansion in 1882, other wealthy residents followed him to the Gold Coast of Chicago. It’s now home to Washington Square Park, the original Playboy Mansion and the Drake Hotel’s notorious cocktail bar, situated on the shores of Lake Michigan.

No matter if it’s the Taste of Chicago or a Blackhawks playoff that brings you to the Windy City, your trip should include a visit to the luxe Gold Coast. Mansions have dotted this end of Lake Michigan since the late 1880s, many of which still stand strong today. Lavish spas, restaurants, shops, and theaters soon followed, giving you plenty to see and do when you hop on a train to the Gold Coast. 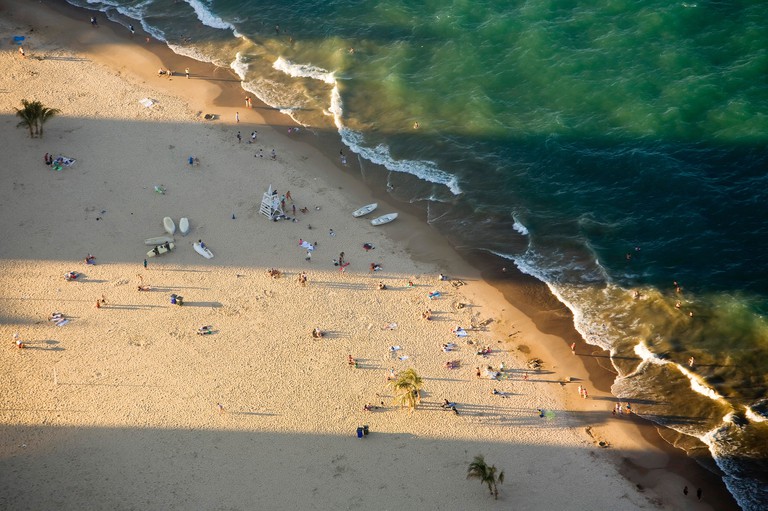 © Matt Stroshane / Alamy Stock Photo
Your first stop on the Gold Coast should naturally be the coast. Oak Street Beach along Lake Shore Drive is an ideal spot for newbies and shoobies who have yet to grace the waters of Chicago. You’ll enjoy the laid-back strips of sand, which are super family-friendly, thanks to restrictions on dogs, alcohol, smoking and watersports. Rent a beach chair and drink in the views of the lake and skyline or wake up with the early-risers and savor a sunrise stroll.

Snap a selfie at the original Playboy Mansion 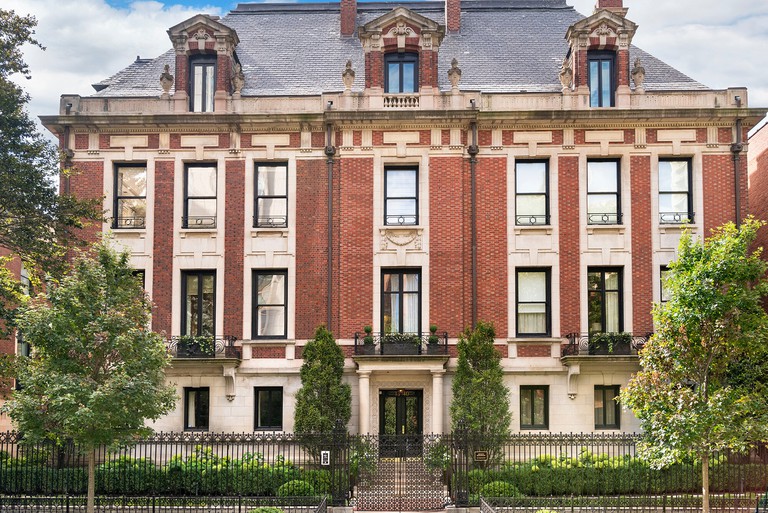 © Eric James / Alamy Stock Photo
Before the legendary pool parties in Los Angeles, Hugh Hefner’s original Playboy Mansion sat right here on the Gold Coast. Hefner outfitted the sprawling home with a basement pool, game room, theater room and even a bowling alley to treat his famous guests to a good time. Though Hugh and his Bunnies may be long gone and the building has been converted to condominiums, you can purchase a unit and throw your own swanky parties, if you have a few million dollars to spare.

Museum
Facebook
Email
Twitter
Pinterest
Copy link
Share
Map View
Ready to scrub in for an interesting Gold Coast landmark? The International Museum of Surgical Science – the only such museum in North America – is a cut above the average medical museum. Getting your friends to explore the 19th century apothecary and dental office won’t be like pulling teeth. Should your group fracture, regroup on the third floor where you’ll discover the Japanese and Taiwanese heroes who accelerated modern medicine by leaps and bounds. Just try not to wince when you pass by the Understanding Pain exhibit. 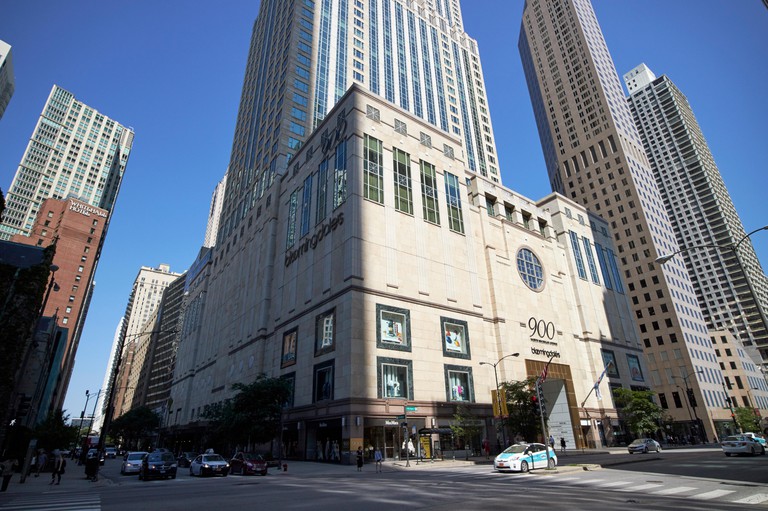 © Radharc Images / Alamy Stock Photo
You’ve shopped your entire life preparing for a visit to 900 North Michigan Shops. At the end of the Miracle Mile, Gucci, Lululemon and Montblanc will all happily hold onto your credit card for you. After claiming the best sale of the day, reward those sore feet with a pedicure at the Four Seasons Spa. Think you’re ready for round two? Then load your arms up with your bags and haul it over to Water Tower Place for 100 more stores and a delicious fish dinner at Harry Caray’s 7th Inning Stretch Restaurant & Sports Bar.

Catch a show at the Broadway Playhouse

Who says you need to be in the Big Apple to see Broadway shows? Let the Second City excite your inner thespian at the Broadway Playhouse. Smack dab in the middle of the Miracle Mile, this theater hosts classics such as My Fair Lady and Fiddler on the Roof, rotated with new hits including The Devil Wears Prada and Disney’s Frozen. You have just as much of a chance catching one-person shows with Rob Lowe on-stage as you do seeing an under-the-radar production such as Dein Perry’s Tap Dogs.

Tuck into classic dishes at the Tavern on Rush 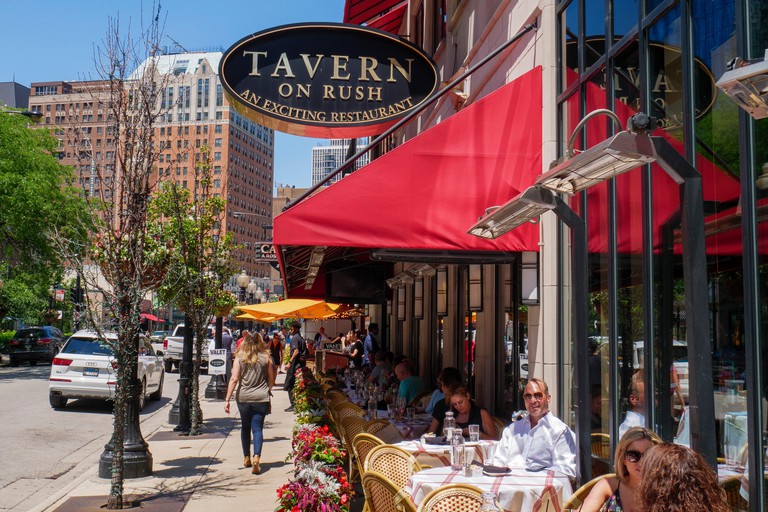 © Todd Bannor / Alamy Stock Photo
You need eons to sufficiently explore the hearty food scene in Chicago, so we encourage you to begin your epoch of eating on Rush Street. It’s one of the oldest streets in the city and one of the best places to taste the past, present and future of the Windy City’s cuisine. Tavern on Rush is a preferred primer with Lake Superior whitefish, homemade macaroni cipriani, and house-made hummus. No one looks at you twice for ordering a New York strip, but all eyes will be on your table when the waiter brings out a triple-chocolate raspberry cheesecake. 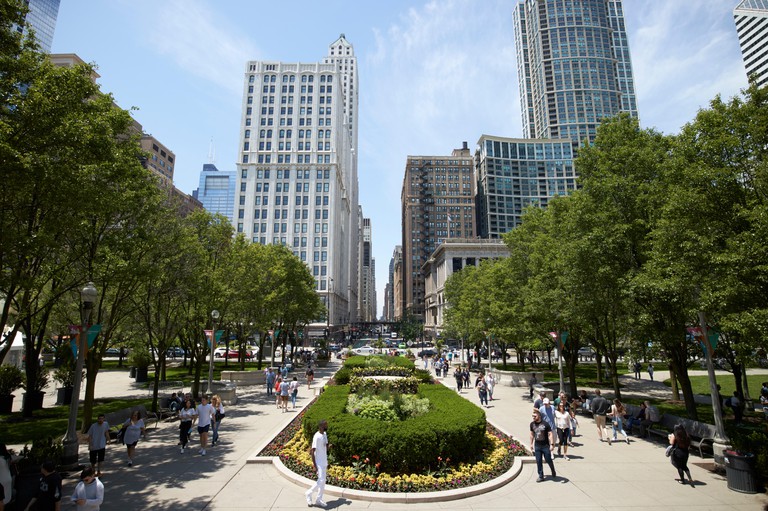 © Radharc Images / Alamy Stock Photo
Across the street from the Newberry is the serene Washington Square Park, founded in 1842. During the summer months, the park is worth celebrating, with a combination of trees, picket fencing, a Victorian fountain that was added in the 1890s and a beautiful array of floral design. It is a great place to take a breath and relax during your busy trip to the Gold Coast. The park is registered as a historic landmark in Chicago.

Museum
Facebook
Email
Twitter
Pinterest
Copy link
Share
Map View
Explore Gold Coast history from the Gilded Age to the present in the Driehaus Museum. You’ll marvel at the 19th-century chandeliers, Lincrusta wall coverings and Chickering & Sons grand piano in this former mansion. When you’re not examining the ebonized library table and other permanent highlights, you can pick out vintage books or handmade jewelry at the gift shop to bring a little of the grandeur back home with you. 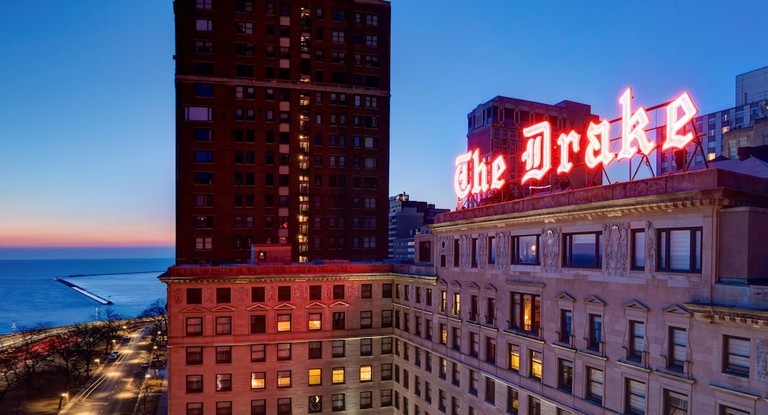 Courtesy of The Drake Hotel / Expedia
View Rooms
Whether you know it from Risky Business or know that it’s a solid place for whiskey business, the Prohibition-era bar Coq d’Or beckons you for a drink. Bartenders at the Drake Hotel have been pouring cocktails with a heavy hand since Prohibition ended. Chicago natives will tell you that the best Gold Coast pairing is a decanter of sherry and a bowl of red snapper tomato and roux soup. It’ll hit your taste buds with a punch of nostalgia and a century of Chicago history.
More info