10 Must-See Artworks At The Art Institute Of Chicago 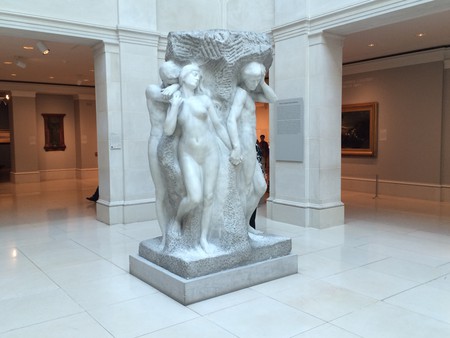 Sculpture of The Solitude of the Soul | Mahwesh Fatima

The Art Institute of Chicago is one of the most visited museums in the world, preserving some of art history’s oldest and most beloved masterpieces. We profile ten must-see works at his Chicago institution.

America Windows has lived at the Art Institute of Chicago since 1977. Russian-French Modernist artist Marc Chagall was an early Modernist, his aesthetic pulling from elements of Surrealism, Cubism, and Expressionism. He gifted this piece to Chicago because of his love for the city and its dedication to public art. America Windows features 36 hand-painted glass panel. This masterpiece runs 30 feet wide and eight feet high, each section showcasing a symbolic image from the realms of literature, theater, and dance. 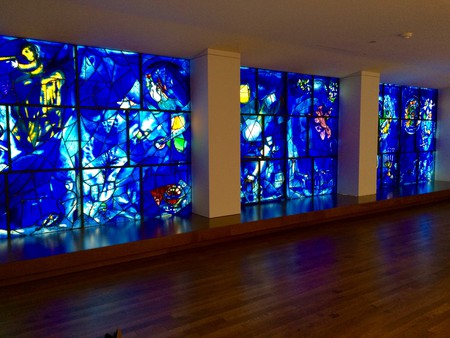 Lorado Toft, The Solitude of the Soul

Part of the Neoclassicism collection, this sculpture is sure to keep visitors intrigued. It has an essence of simplicity and integrity that tells its story. The idea behind Neoclassicism is that it is influenced by classical Greek and Roman sources, and European and American artists such as Toft have used this style to show appreciation, beauty, and aesthetic through their masterpiece. The Solitude of the Soul, a monumental sized sculpture with a marble frame, catches the attention of guests immediately in a room filled with Greek and Roman inspired sculptures. Toft explains his artwork’s story thusly: ‘however closely we may be thrown together by circumstances…we are unknown to each other.’

Sculpture of The Solitude of the Soul | Mahwesh Fatima

A masterpiece that is sure to light up any room, this oil canvas is beautiful because of the way these Greco-Roman gods are carefully placed around each other, and it has an interesting story to tell its visitors. Abraham Janssens describes his painting as such: ‘Venus clasps the hand of her son, Cupid, and lectures a scowling Jupiter, while the rest of the ancient gods crowd together on the clouds of Olympus.’ The reason for the dispute is unclear within the painting, but is evidently portrayed through Janssens’ way of making each figure in the painting engaged. Even from a distance, the striking colors and the body language of these gods will catch your eye. 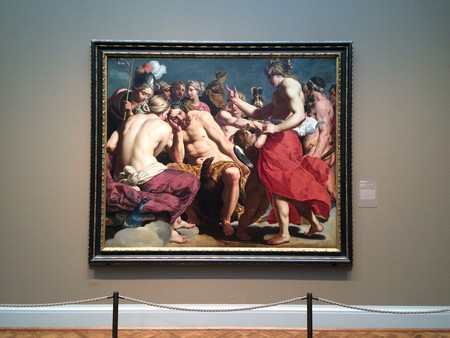 Visitors will be left speechless by the stunning pieces from the Islamic Art & Textile collection at the Art Institute, particularly the 13-foot wide Spandrel with Hunt Scene design from Iran. This magnificent spandrel is dated to the mid-17th century during the Safavid Dynasty. The impressive details, colors, and artistry show a glimpse into the creativity held by the Islamic Art world, making it a must-see at the museum. 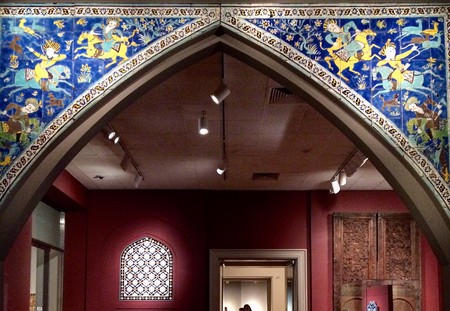 The Art Institute recently acquired a rare Hellenistic or Roman bronze sculpture 100 B.C.-A.D. 100, and they showcase these astonishing pieces in the ‘Dionysos Unmasked: Ancient Sculpture and Early Prints’ collection. By observing this sculpture up close, you will be able to notice how well preserved and ancient this masterpiece is. A classical relic of the Greek god Dionysos (god of wine and theater), this piece sparks guests’ interests because of its compelling story. Dionysos is known to be a god that can take many forms from which he could appeal to his audience, and at the Art Institute, this form of Dionysos appeals to art lovers! 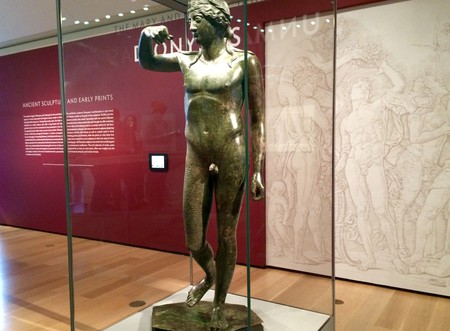 Mysterious and alluring, this painting draws the attention of many guests due to its exotic, foreign vibe. It holds a sense of attraction, as the female in this portrait is standing strong and facing away in proud manner. When taking a closer look at this painting’s caption, viewers will notice that, remarkably, this is a portrait of one Ralph Clarkson’s students dressed in what is traditional Armenian clothing. Along with its vivid colors and dynamic, the painting is able to effortlessly capture a culture clash or dual identity, with the female showing off her foreign roots in an American artist’s painting. 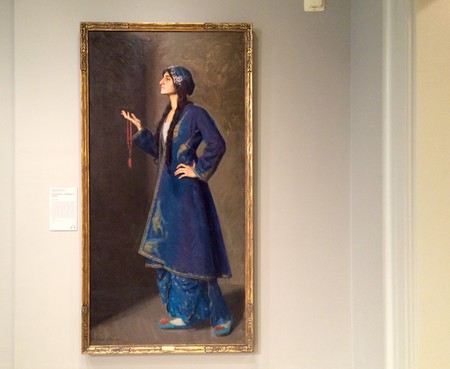 This simplistic Buddhist sculpture from 618-906, c 725/50 is impeccable, with its posture and graceful facial details. It is sure to catch the eye as guests walk into the realm of East Asian art. The striking quality about the Bodhisattva sculpture is that it displays realistic features in a humble manner — since the Buddhist sculptures are meant for spiritual influence, they guide or teach men to be poised as humans, and this masterpiece embodies just that. With its eloquent demeanor and symbolic meaning, the Bodhisattva is definitely one of the must-see pieces at The Art Institute of Chicago. 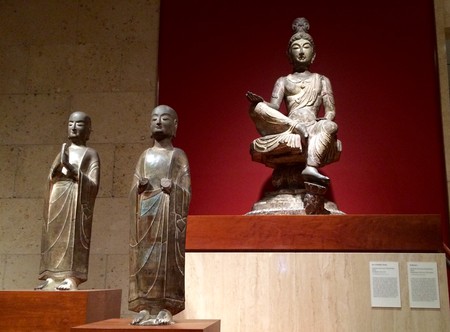 Why is this next masterpiece a must-see? For starters, this is portrait of one of the greatest Roman leaders to rule during 161-180 A.D. — Marcus Aurelius. This Portrait Bust of the Emperor Marcus Aurelius signifies his importance as an individual, as Aurelius was a leader that held integrity and compassion for his people. For that, he is known as the ideal Roman ruler, and this portrait exemplifies glory by recognizing his intelligence, elegance, and class through its respectable craftsmanship, and the strong demeanor of the man himself. 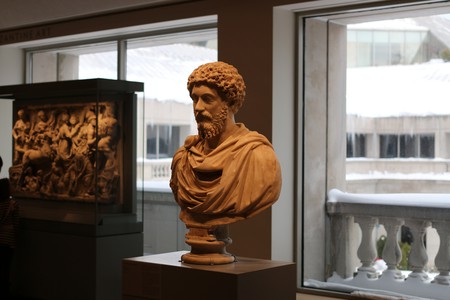 A symbolic piece of French history, the Londonderry Vase portrays the most intricate paintings and delicate details of its flowers, birds, and symmetrical form. The vase holds significance because it is one of the most impressive and grand forms of Empire style art, and was also influenced by Roman imperial art for the French Empire porcelain. With its enormous size, visitors are sure to notice its presence as one of the most attention-grabbing pieces among other European artworks. A close up of this work demonstrates excellent French craftsmanship, design, and splendor. 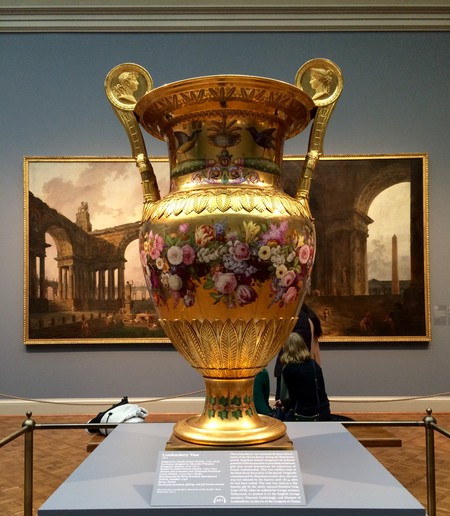 Necklace Inscribed with the Name of King Pratapmalladeva

Last but not least, you are certain to notice this exotic statement necklace amidst the Nepal artwork collection at the Art Institute. The necklace (c. 1650) is said to be a gift to a patron goddess by the King Pratapmalladeva of Nepal. It is a simplistic and beautiful necklace — however, when approached and looked at up close, it displays detailed craftsmanship, and a striking copper tone that is complemented by semi-precious stones. 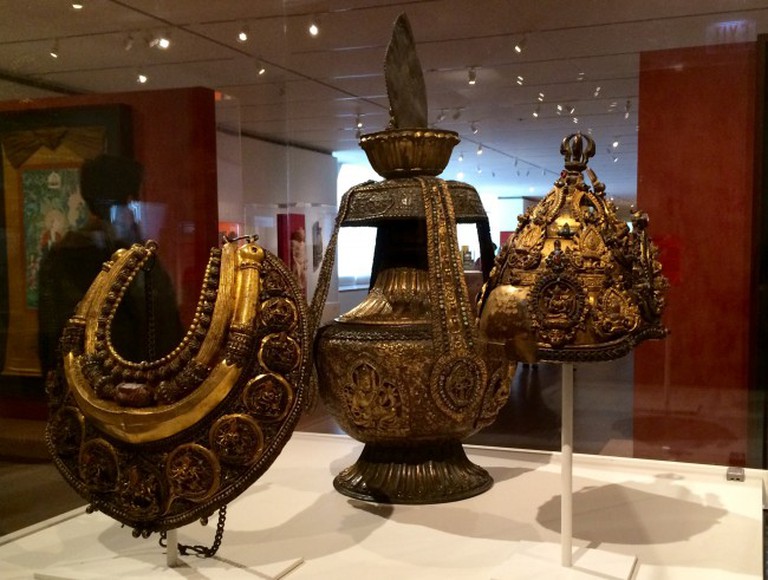