Courtesy of Gamaliel Ramirez
There is so much more to Chicago‘s art scene than its four-walled museums. Get outside and stroll through the streets to sample some of the city’s most talented and well-known artists. Their murals may cause you to look at the world differently or even inspire a change in you, and they’re always good for your next Instagram photoshoot.

Victor Ving and Lisa Beggs have been traveling the United States since April 2015, camping in their RV and painting murals wherever they go. Their Greetings Tour murals emulate the popular ‘Large Letter’ postcards from the mid-20th century, featuring artwork that pertains to the city in each block letter. Ving creates the art, and Beggs researches the destination and photographs the process. They have left their mark in 19 cities and counting. The Chicago mural was completed in May 2015 and can be seen in Logan Square. If you’re interested in the other cities, follow their cross-country journey on their Instagram page. 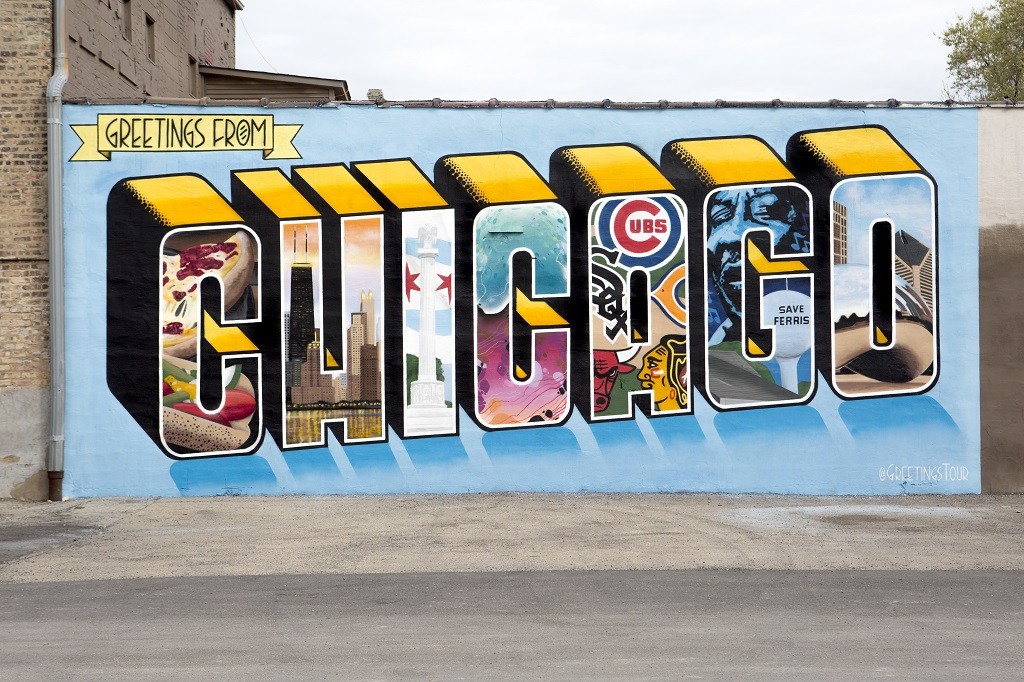 Park
Courtesy of Tony Passero
Tony Passero is a North Side native who remains in Independence Park with his own family. They often help him complete his vibrant and mesmerizing Chicago murals. Passero is an entirely self-taught artist who incorporates a blend of Latin, Creole, and Tribal tones into his expressionist-style artwork. In addition to public art, he’s also an accomplished graphic designer and the founder of Chicago advertising agency TribeAgency. He completed the Whoot Mural in the Avondale neighborhood in June 2014, and you can follow him on Instagram here.
More Info
Open In Google Maps
Chicago, Illinois, USA
View menu
Visit website
Visit Facebook page
Send an Email
Give us feedback

Where We Come From…Where We’re Going

Park, Train Station
Where We Come From | Where We Come From
Outside the Hyde Park Metra train station in 1992, Olivia Gude stood on the corner and interviewed passersby about their origins and destinations. She recorded their responses, photographed them, and turned her findings into a mural that still delights today. People spoke to her about everything from ‘everyday descriptions of their comings and goings to ruminations on career and family history to observations about the social and political times to thoughts on meta-physical and spiritual journeys and changes.’ It was restored in 2009 to keep it fresh and prominent in the neighborhood.
More Info
Open In Google Maps
Chicago, Illinois, USA
View menu
Visit website
Visit Facebook page
Send an Email
Give us feedback

Park
Hebru Brantley's artwork | © Kevin Tao /Flickr
Local Chicagoan Hebru Brantley has made a definitive name for himself in the city’s art scene as of late. He covered this wall at the Hollywood Cleaners in Wicker Park with his signature characters and style, but that’s not all you know from him. He also collaborated with another Chicago artist on the massive Kris Bryant mural in Lakeview that was unveiled during the Cubs’ historic season. Much of his work has garnered significant Instagram attention and critical acclaim.
More Info
Open In Google Maps
Chicago, Illinois, USA
View menu
Visit website
Visit Facebook page
Send an Email
Give us feedback

Park
Courtesy of Mile of Murals
Far North Side neighborhood Rogers Park is well known for being an epicenter of Chicago arts. Its east side is home to several galleries, art-displaying cafés and restaurants, and small venues. In 2007, the Mile of Murals project began alongside the area’s branch of the Red Line elevated train tracks. Every year, new sections of the walls and underpasses are painted with murals by local Chicago artists in order to celebrate the neighborhood’s culture and beautify it in the process. You can tour the art by piece on their website or stroll along and explore the work in person. The 2016 addition is a collaboration with New York’s Audubon Mural Project, which honors endangered bird species in their work. The latest section on the Mile of Murals features 13 different birds from the Chicago region that are threatened by climate change.
More Info
Open In Google Maps
Chicago, Illinois, USA
View menu
Visit website
Visit Facebook page
Send an Email
Give us feedback

Park
Courtesy of Gamaliel Ramirez
If you tighten the frame enough at this mural, no one will ever know you’re still in Chicago. Gamaliel Ramirez painted Birds of Latin America in Humboldt Park during his 40-year tenure of breathtaking artistry in Chicago. He now lives and operates a studio out of San Juan, Puerto Rico, but his mark on the Windy City stands strong. He painted the birds in 1981 along with Centro Unidad Latina student artists and had it restored in 2004.
More Info
Open In Google Maps
Chicago, Illinois, USA
View menu
Visit website
Visit Facebook page
Send an Email
Give us feedback

Building, Museum
Gulliver in Wonderland | © Señor Codo/Flickr
Hector Duarte moved to Chicago from Mexico in 1985, and he has since covered the city in more than 50 murals. His work is most recognized in the Pilsen neighborhood, where he has been featured in the National Museum of Mexican Art many times. This particular mural wraps around his home and studio building, covering more than 3,000 square feet. The depicted man (Gulliver) is a Mexican immigrant chained in barbed wire, struggling to break free. Duarte’s art often speaks a deep message, reflecting political and social turmoil. His building is a frequent stop on Chicago art tours.
More Info
Open In Google Maps
Chicago, Illinois, USA
View menu
Visit website
Visit Facebook page
Send an Email
Give us feedback

Loft Zero Gallery in Noble Square showcases some of the edgiest art in Chicago. They feature local artists, as well as those from New York, Philadelphia, London, and Spain. This wall just outside their space is painted and repainted all the time by artists they work with, and their latest is a celebration of the Chicago Cubs’ World Series win. It was done by Sebastien Carpediem, who uses the moniker Diem in his pieces. Fans have loved snapping pictures in front of the art to get in on the party and rock their city pride – this mural will remain through the winter, so get your pictures while you can. 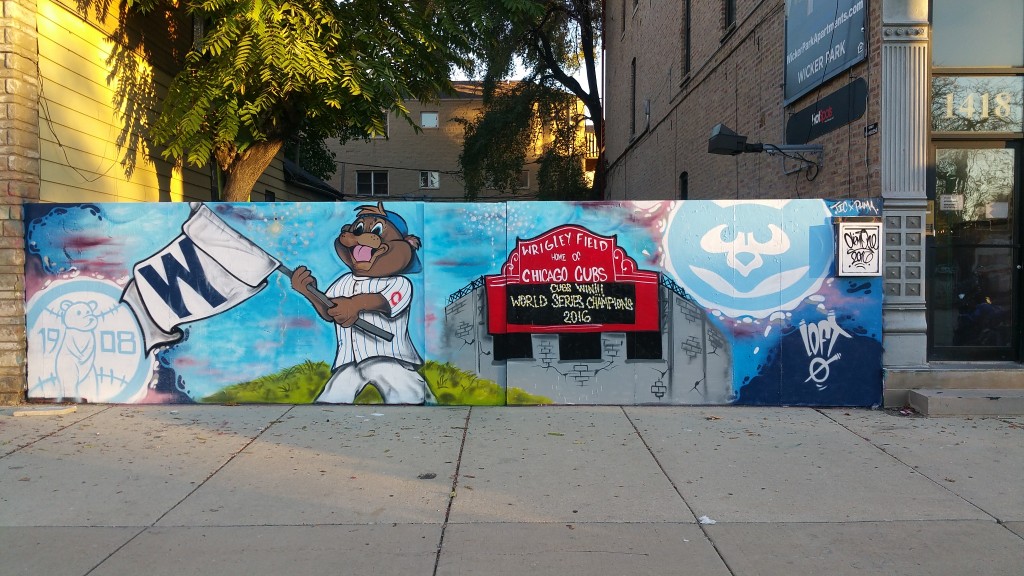 Building, Park
Courtesy of Jeff Zimmermann
Jeff Zimmermann is something of a Chicago mural celebrity. His most well-known piece of work is the massive You Know What You Should Do, which covers the walls of a pedestrian path at Oak Street Beach. But if you know where to look, you can find his art all over the city. He did a portion of Rogers Park’s Mile of Murals at the intersection of Lunt and Glenwood, and over the summer, he covered the side of his studio building with his signature faces. His most recent work is at the site of another Chicago gem: The 606 trail. ConAgra impressively covers the side of a three-story building at the Milwaukee Avenue access point of The 606. The small adjacent Park 567 has evolved into a community destination for those exploring the path, with Zimmermann’s graphic and poignant artwork as the backdrop.
More Info
Open In Google Maps
Chicago, Illinois, USA
View menu
Visit website
Visit Facebook page
Send an Email
Give us feedback

The Silence of the Slippers After the Rain

French duo Ella & Pitr have been painting together for more than a decade. Their work is seen all over the world, but it’s mostly populated in France and western Europe. In 2016, they held their first-ever United States gallery show at Vertical Gallery in Chicago, displaying their new art. They paint their murals onto giant walls, parking lots, rooftops, train cars, and more and usually depict a larger-than-life human trapped within the confines of their painting. The characters are often distressed, disheveled and even sleeping. You can see The Silence of the Slippers After the Rain in West Lakeview and their second Chicago mural in the South Loop.