The 10 Best Bars In Boise, Idaho

Boise, Idaho’s capital, is a modern city with historic roots. Since its founding in the 1860s, this metropolis has proved to be a hotbed of Western American culture and cuisine, all driven by a strong frontier mentality. That, and nearby Boise State University, have nurtured the population’s love for good drink and a night out on the town. Here is a list of the 10 best bars in Boise, Idaho.
Main dining room Courtesy of Sapphire Music Lounge

Bar, Beer, $$$
Getting Live | Courtesy of Spacebar
Located in the Riverside Hotel, The Sapphire Room is one of Boise’s most popular music venues, mainly featuring and supporting local musicians, who keep nearly all of the ticket profits. The music bar was remodelled in October 2012 to enhance the experience of both guests and performers, with the installation of state of the art lighting and speakers. The main seating area, doused in soft purple light, is laid back and welcoming. Enjoy one of the bar’s speciality cocktails, like the Idaho-inspired ‘North End’ that’s made with 44 North Rainer Cherry Vodka.
More Info
Open In Google Maps
2900 West Chinden Boulevard, Garden City, Idaho, 83714, USA
+12083431871

Bar, Beer, Pub Grub
Boise Brewing Growlers | Courtesy of Boise Brewing
In the heart of Boise’s historic district, Spacebar Arcade merges that childhood love for arcade games, comic books and board games with the grown up love for good beer. With over 20 classic games, such as Mario Bros, Pac-Man, Tron and Frogger, boredom is something seldom experienced at this throwback joint that focuses on the ‘golden age of arcades.’ According to bar manager, Will Hay, Spacebar strives to ‘present itself as a functional art gallery, whether guests know it or not.’ So, relax, try one of the bar’s specially selected draft beers, and embrace your inner nerd.
More Info
Open In Google Maps
200 North Capitol Boulevard, Downtown, Boise, Idaho, 83702, USA
+12089180597
Visit website

Situated in downtown Boise, Boise Brewing is not the largest brewery in the area, but what it lacks in size, it certainly makes up for in quality and attention to detail. Small batch brewing only allows for more variety in their taproom, as well as the ability to use higher quality ingredients, such as honey and fruits from local farmers. They also give back to the community by donating used grains to farmers for fertilizer. Have a seat in the industrial style tasting room and spend the afternoon sipping from Boise Brewing’s carefully produced menu. As a bonus, all beers are vegetarian friendly. 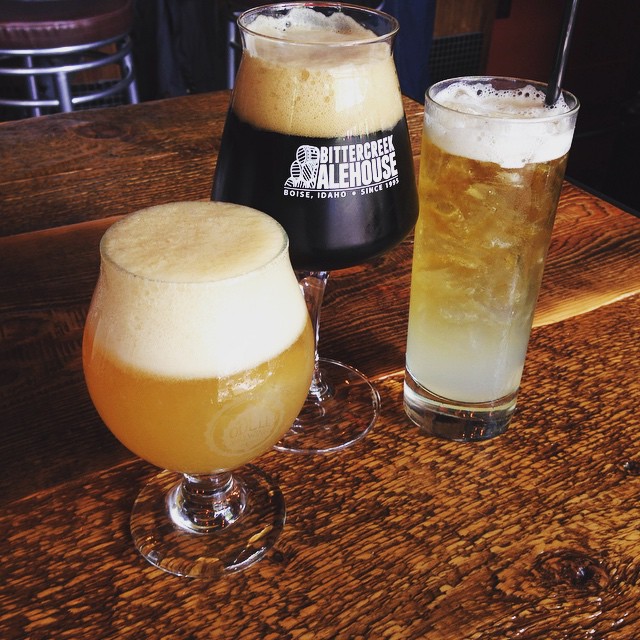 Butcher, Restaurant, American, Contemporary, $$$
Located side by side and sharing a common owner, the Bittercreek Alehouse and Red Feather Lounge are both popular evening destinations in downtown Boise. The Bittercreek Ale House caters to beer lovers, offering an extended menu of brews on tap that is updated daily and organized by flavor profiles (hoppy, malty, fruity and so on), making it easy for customers to figure out what to drink if they aren’t familiar with the selection. The Red Father Lounge meanwhile, caters to cocktail lovers, offering a similarly extensive selection of colorful and tasty mixers.
More Info
Open In Google Maps
246 North 8th Street, Downtown, Boise, Idaho, 83702, USA
+12084296340
Visit website
Visit Facebook page

Bar, Beer
Kera and The Lesbians-Pengilly Saloon-Treefort 2015-Credit-Michael Smith | © Treefort Music Fest/Flickr
As odd as it may be, Boise is home to a large population of people from the Basque country, a small autonomous region between Spain and France. Since 1990, Bar Gernika, located on Capitol Boulevard, has paid homage to the local Basque community and Boise with its unique selection of food and drinks. Basque style sandwiches, like the marinated pork loin and pimento-topped solomo, commandeer their own section of the menu, while beef tongue Saturdays are an event that should not be missed.
More Info
Open In Google Maps
202 South Capitol Boulevard, Basque Block, Boise, Idaho, 83702, USA
+12083442175
Visit website

Bar, Beer
Treefort 2015-Wordell-7260 | © Treefort Music Fest/Flickr
Listed as one of Esquire magazine’s top 100 bars in the nation, Pengilly’s Saloon, located on Main Street, is a must-visit while in Boise. This bar is definitely a throwback, with its century-old Brunswick bar, equally old cash register and worn wooden floors. Grab a cold brew and start a game at the red felt topped pool table, or pull up a chair and listen to the local musicians that play at the saloon every night. For an extra fun time, be sure to stop by on a Monday, when local musicians Rebecca Scott and Bob Hill host an open mic night.
More Info
Open In Google Maps
513 West Main Street, Downtown, Boise, Idaho, 83702, USA
+12083456344
Visit website

Bar, Beer
Cocktail in the making | Courtesy of Press & Pony
Located in the heart of Boise, Neurolux Lounge is not a typical bar. Often described as a ‘throwback’ and ‘retro’, Neurolux is a dive bar meets music venue done in the best possible way. Specializing in indie music, the lounge is often where local artists find an enthusiastic audience. Another reason to get excited in Neurolux’s eight-hour long happy hour, when full pitchers of beer cost a mere $7.
More Info
Open In Google Maps
111 North 11th Street, Downtown, Boise, Idaho, 83702, USA
+12083430886
Visit website

Bar, Cocktails, Beer, $$$
The Modern Hotel, Boise | © Daniel X. O’Neil/Flickr
Tucked into the ground floor of the historic Adelmann Building, Press & Pony specializes in craft beer, speciality cocktails and burgers. The interior of the bar is dark and rich, looking as if you’ve stepped off the street and straight into film noir. Press & Pony makes four of their own draft tonics, ranging from spicy and sweet to smoky and bitter, all to pair with four base spirits. These tonics and spirits form the bases for some very interesting combinations, such as Old Tom Gin, Mezcal, grilled apricot, pine cone syrup and maple syrup in the ‘Local Forged’ cocktail. And if beer is more your thing, there are several local brews on tap.
More Info
Open In Google Maps
622 West Idaho Street, Downtown, Boise, Idaho, 83702, USA
+12082044167
Visit website

Bar, Cocktails, Beer
Located in the Modern Hotel, a renovated and redesigned motel in the heart of Boise, the Modern Bar features a selection of speciality cocktails, good wine, simple bar food and new music. Due to its friendly yet elegant atmosphere, the Modern Bar has garnered a large local following despite its locale in a hotel. The dishes prepared by the bar’s chef use local and seasonal ingredients whenever possible. However, the main attraction here is the cocktails. If you’re feeling gutsy, try the ‘Rattlesnake,’ a combination of whiskey, lime juice, simple syrup, egg white, and absinthe.
More Info
Open In Google Maps
1314 West Grove Street, Downtown, Boise, Idaho, 83702, USA
+12084248244
Visit website

Bar, Wine, Beer, American, $$$
While many of the bars in Boise are known for either craft beer or speciality cocktails, Bodovino, located right downtown, is all about wine. In fact, there are over 140 different wines on tap at any given time. Patrons simply use a ‘Wine Emotion Machine‘ to select a specific wine and portion size, traveling around the world without ever leaving their seat. Bodovino has the largest collection of Wine Emotion Machines in the United States, so the experience at this bar is completely unique.
More Info
Open In Google Maps
404 South 8th Street, Downtown, Boise, Idaho, 83702, USA
+12083368466
Visit website