In Idaho You Can Spend the Night in a Potato

The last thing you imagine coming across on Airbnb is a giant potato. But that’s exactly what you can expect to find when surfing accommodation options in Idaho, USA.

A “giant potato hotel” sounds completely fascicle. However, there’s a cunning backstory to it. For seven years it served as a brilliant PR stunt for the Idaho Potato Commission, who transported the 6-tonne 28-foot long, 12-foot wide and 11.5-foot tall potato around the USA. Initially, the fiberglass potato was created to celebrate the 75th anniversary of the Idaho Potato Commission to highlight its heart-healthy crop over a one-year campaign, but it quickly became clear that it was a hit and somewhat a pop-culture icon. 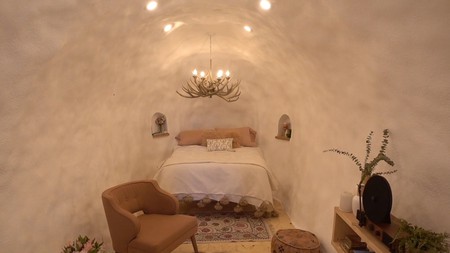 Following its time on the road across 48 states, the potato now calls a 400-acre farm in Boise, Idaho home. And for around $200 dollars a night it’s somewhere you can rest your head and stay in comfort. “If you love the fluffy feeling you get when you eat Idaho potatoes, you’ll love staying in a giant potato turned cosy, grown-up getaway for two,” writes host Kristie Wolfe.

A former Big Idaho Potato Tour spokesperson, Kristie designed the steel, plaster and concrete potato, which boasts bohemian furnishings like a record player, old records and succulents that wouldn’t look out of place on a Pinterest board for home inspiration. Meanwhile, it comes complete with a custom-built king-sized bed, air conditioning, power outlets for electronics, a mini fridge and heating. Basically, there’s everything including the kitchen sink – quite literally. The only thing missing inside the potato is a bathroom, which is located in a nearby silo-cum-spa nearby, with its own fireplace and skylight.