Renowned as a surfers’ paradise and heaven for hiking enthusiasts, Kauai is a top destination for those seeking outdoor adventure. Yet there’s an unofficial attraction on the island, steeped in cultural history and enveloped by creeping jungle that draws an eclectic crowd. 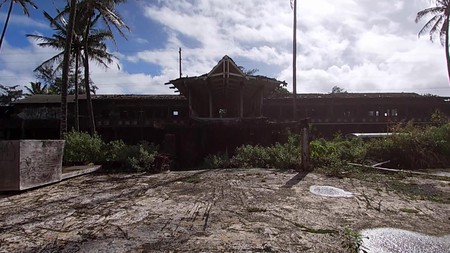 Enter the creepy abandoned resort in Kauai at your own risk! | © Culture Trip

The Coco Palms Resort is Kauai’s oldest and once grandest hotel, but since its closure in the early ’90s, it has evolved into a bizarre tourist hotspot and place of nostalgic significance next to the Wailua River – a haunting ruin of its former glory.

Located amid the largest coconut grove in the state of Hawaii, the hotel was built using beautiful natural and local materials, with luxurious exaggeration of traditional Polynesian architecture. When it opened in 1953, the resort portrayed a certain perception of paradise, a magical place where mealtimes were announced by conch shell and nightly entertainment included an atmospheric river procession and torch lighting ceremony. It became an instant hit with vacationers buying into the ‘American Dream’ and was soon frequented by the cream of Hollywood, attracting the likes of Frank Sinatra.

In a glorious finale of shimmering Technicolor, the final scene of Blue Hawaii (1961), starring Elvis Presley, was shot on-site, catapulting Coco Palms to world fame and cementing it as the ultimate holiday destination. Elvis stayed at the resort many times, and it allegedly became his favorite retreat. The resort even boasted a specially adapted Elvis bungalow, built to accommodate his particular needs.

Today Coco Palms is best known for its exaggerated decline, an eerie abandoned paradise consigned to eternal dereliction. To date, Hurricane Iniki is Hawaii’s most powerful tropical cyclone, and thanks to the devastation it wrought, the hotel may never reopen. The property has been the subject of development rumors many times over the years, but the economics of the local hotel industry, disputes over the land and its less desirable location (in what is no longer considered a prime spot) has scuppered plans time and again.

With so much surrounding natural beauty and plenty to see and do on the island, people may wonder what the draw is here. Some visit for nostalgic reasons. In its heyday, the hotel provided an enchanting backdrop to more than 500 wedding ceremonies that would take place each year. Many come just to absorb the atmosphere of a bygone era – remnants of retro interiors from a groovier time are evident in peeling wallpaper and terrazzo tiles, giant clamshell sinks and rattan light fixtures.

Elvis mega-fans make the pilgrimage to this abandoned site in order to stand in the bungalow he once inhabited. Dereliction seemingly is not dampening the thrill here; rather, it enhances it.

A freerunner’s dream, the place is littered with debris and offers long corridors and flat roofs – ideal for practicing parkour and shooting dynamic videos against the backdrop of palms using drones and GoPros.

For film buffs, there’s no shortage of intrigue as the site has served as jungle locations for movies such as Pirates of the Caribbean: On Stranger Tides (2011) and Dinocroc vs. Supergator (2010). Enthusiasts travel here to soak up the atmosphere and marvel at the lush, wild jungle that is reclaiming the resort.

Fragments of decaying structures, echoing halls and rickety bungalows still stand in disrepair, and partially collapsed walkways bridge stagnant water. To the cynical eye, the place is a dump. Cast in the glow of nostalgia, however, this erstwhile hotel becomes a heartbreakingly poignant token of long-lost glamour. It’s haunting to say the least.

Although strictly private property, unofficial tours are available to book with a former caretaker who remembers the hotel fondly, in all its grandeur. He takes groups on an evocative deep dive into the history of the place and certainly has a few tales to tell.