This is How Local Hawaiians Celebrate King Kamehameha Day 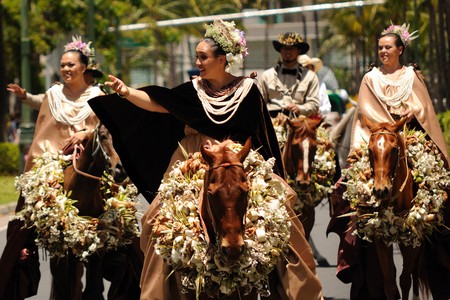 Hawaiians continue to celebrate the legends and power of the late Great King Kamehameha every year on June 11.

Hailing from the Big Island, Kamehameha the Great—later to become King Kamehameha I—unified the eight main Hawaiian Islands as the Kingdom of Hawaii and established the first monarchy. For over a century, Hawaiians have celebrated the late Great King throughout the Aloha State in a publicly observed holiday in June, honoring the first Hawaiian king and his legacy.

The story behind a legendary leader

King Kamehameha I was shrouded in mystery and superstition since his birth in the early 18th century, until his death in 1819. Ancient legends link his birth with meteor showers and comets that signified to the public when a great chief had arrived. He reportedly fulfilled the prophecy set by a kahuna, indicating that whoever lifts the 5,000 pound Naha stone—which still lives in Hilo—would break the bonds and possess the power to unite the islands. He completed this daunting task in 1795 with the islands of Niʻihau and Kauaʻi voluntarily joining in 1810.

The beloved king was known as a calculating diplomat, exemplary leader, and master of military tactics. 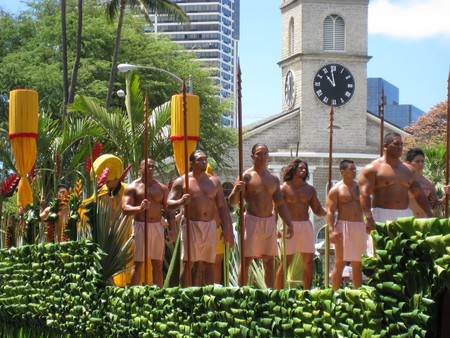 Parades are held throughout the islands, but none draws more crowds than in Honolulu—Hawaii’s bustling state capital. Sweet-smelling floral floats, marching bands, and hula hālau (hula groups) make their way through Downtown to Waikīkī. But the main highlight is always the paʻu riders, a queen followed by her princesses on horseback dressed in one of the island colors and covered in lei and flowers—their horses to match. 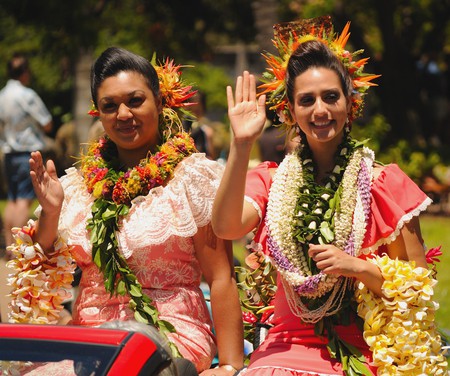 The parade finishes at Kapiʻolani Park, where a hoʻolauleʻa (celebration/party) is organized. The air is filled with the smell of fresh flowers and local food cooking nearby, while an entire day of entertainment including local musicians, singers, and hula performances is scheduled at the bandstand. 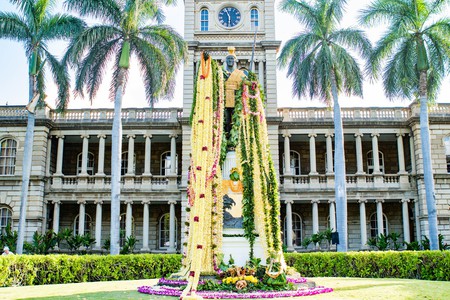 Six statues of King Kamehameha I were sculpted, but none is visited as much as the one standing on King Street between Aliʻiōlani Hale (home to the Hawaii Supreme Court) and ʻIolani Palace (the former royal residence).

Each year, a 40,000-feet lei crafted with thousands of flowers is carefully lifted by firetruck and draped over the statue’s outstretched arm and along its base. Members of the community donate their backyard flowers or volunteer to help string the lei, which takes hours to complete. The ceremony consists of traditional blessings, oli (chants), and hula dancing. 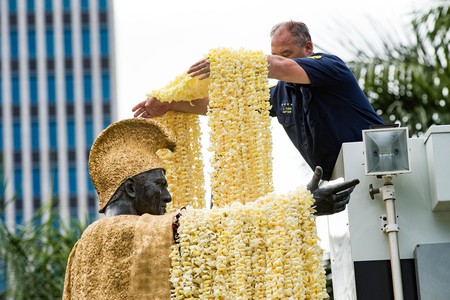