The Top 10 Things To Do and See in Chinatown, Honolulu

Chinese immigrants first landed on the shores of Hawaii in 1788 to work on the sugar plantations. The years passed and more Chinese workers arrived, many of them choosing to stay and open their own enterprises – this is how Honolulu’s Chinatown was born. Today, it covers 15 blocks and is buzzing with action, while still acting as an important hub for many Koreans, Hawaiians, Filipinos, Japanese, Chinese and Vietnamese. Here, we take a look at the top 10 things to do in Honolulu’s Chinatown.

Check out the markets

A trip to Chinatown is not complete without checking out its marketplaces. Head to Oahu Market for a tantalizing display of tropical fruits, such as watermelons, pineapples and many others. Then head over to the Yat Tung Chow Noodle Factory, where they make noodles of nine different sizes, from super thin strands to thick udon noodles. Fans of Filipino, Korean, Chinese and Thai cuisines will love the food court at nearby Maunakea Marketplace. 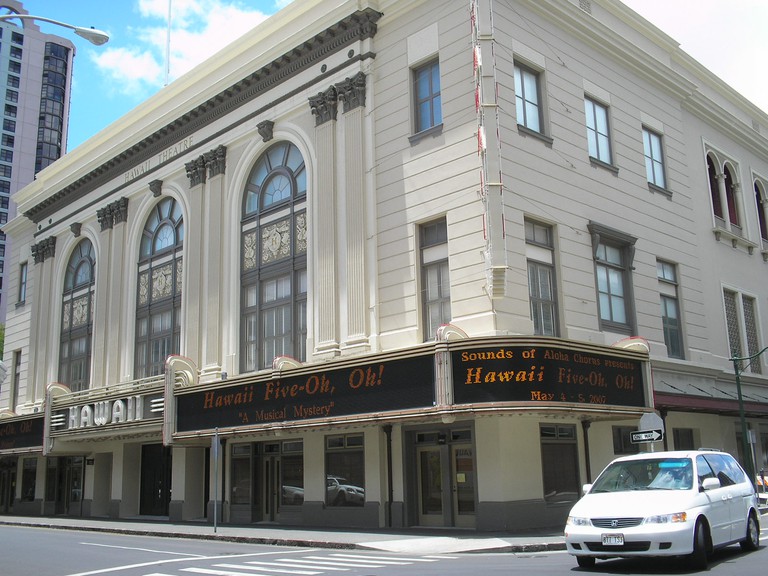 Hawaii Theatre | © Joel Bradshaw / WikiCommons
The “Pride of the Pacific” has been a source of entertainment in Honolulu for nearly a century. Built in 1922, the Hawaii Theatre Center was a popular grand movie palace in its early days. Today, the theatre offers a huge variety of entertainment, from vaudeville performances and plays to silent films, musicals and concerts. In 2005, it was recognized as the “Outstanding Historic Theatre in America” by the League of Historic American Theatres.
Open In Google Maps
1130 Bethel Street, Arts District, Honolulu, Hawaii, 96813, USA
+18085280506
Visit Website
Give us feedback

The Hawaii Heritage Center sponsors a walking tour of Chinatown, which stops at several spots in the area, including historic buildings that have been standing for 100 years or more. The guided tour features multimedia exhibits with interviews, interesting facts and photos showing the neighborhood’s past. Learn about how the thriving sugar cane industry attracted Chinese immigrants to Hawaii in the 19th century – many of them stayed and settled permanently near the harbor, creating Honolulu’s Chinatown as it is today.

The arts are an integral part of Hawaiian culture and have been since ancient times. Nuuanu Avenue and Bethel Street in Chinatown are two of the best spots in Honolulu to admire artwork of all kinds. Artist Pegge Hopper shares her original work in a gallery that has been open since 1983. The Ramsay Museum, located in the historic Tam Sing Building, is known for fine pen and intricate Indian ink work that is best admired with a magnifying glass. There are plenty of other unique galleries just waiting to be discovered, too!

Bar, American
Facebook
Email
Twitter
Pinterest
Copy link
Share
Map View
Ong King Art Center‘s mission is to create a sustainable art community. The atmosphere is relaxed and the place is monitored by Bailey, the friendly dog. Ong King is the best place in town to catch a live comedy show or an eclectic dance performance. The entrance fee is very reasonable (typically between $5 and $10) and the beverages at the bar have no set price – just be sure to make a donation of your choice to this fabulous Chinatown spot!
Open In Google Maps
1154 Fort Street Mall, Downtown, Honolulu, Hawaii, 96813, USA
+18084508324
Visit Website
Give us feedback

Museum
Facebook
Email
Twitter
Pinterest
Copy link
Share
Map View
Located inside the Maunakea Marketplace is this small museum that displays photographs and artifacts that are of importance to the Chinatown neighborhood. Visitors will learn about events such as the Great Chinatown Fire of 1900 that destroyed almost the entire area. It’s a must-see, especially for history buffs!
Open In Google Maps
280, 1120 Maunakea Street, Downtown, Honolulu, Hawaii, 96817, USA
+18082858316
Visit Website
Give us feedback

The oldest Buddhist temple on the Hawaiian islands, Kuan Yin Temple remains an important place of worship. It is well-known for its green roof made of ceramic tiles. During festivals, Buddhists come here to burn incense and receive blessings. The temple’s name honors Kuan Yin, who chose to remain on earth to do good even after achieving enlightenment. Various depictions of her can be found all over the Aloha State.

Park, Botanical Garden
Facebook
Email
Twitter
Pinterest
Copy link
Share
Map View
Though it’s been open since 1931, some of the trees in the Foster Botanical Gardens have actually been around since 1853, when Queen Kalama leased a portion of her land to a German doctor. This 13.5 acre plant sanctuary is on the National Register of Historical Places and offers free guided tours at 1pm Monday through Saturday. Highlights include the cannonball tree and the enormous Quipo.
Open In Google Maps
180 North Vineyard Boulevard, Downtown, Honolulu, Hawaii, 96817, USA
+18087687135
Visit Website
Give us feedback
Give us feedback