The Story Behind Hawaii’s State Fish 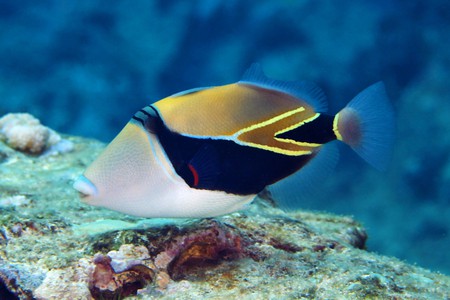 Humuhumunukunukuāpuaʻa. That’s the short, memorable, and easily pronounceable name of Hawaii’s state fish. As the only U.S. state unattached to North America, it’s unsurprising that the island chain of Hawaii—rich with seaside culture and customs—has a designated state fish. Delve deeper into the story behind the humuhumu.

Humuhumunukunukuāpuaʻa (Reef Triggerfish) may seem like an intimidating word in itself, but it’s actually quite simple. Regardless, locals often save their breath and shorten it to just humuhumu. Like all Hawaiian names, there is deep meaning and history behind the state fish’s moniker. When broken down, the first part, “humuhumu,” is the Hawaiian word used for all species of triggerfish. The latter half of the name, “nukunukuāpuaʻa,” translates to “snout like a pig.” Albeit a seemingly strange analogy, there is a similarity between the unique grunting sound the live fish make when threatened and the recognizable sounds coming from pigs.

The humuhumunukunukuāpuaʻa also makes an appearance in Hawaiian mythology. The fish is closely associated with the demigod and shapeshifter Kama Puaʻa, who also takes the form of a man or a wild boar. As the story goes, Kama Puaʻa was a ruthless chief from the island of Oʻahu. One day, deciding to take a trip to the Big Island, he laid eyes on Pele, the goddess of fire and lava. He fell in love, later leading to their marriage. But Kama Pua‘a’s ruthlessness emerged before Pele, and in a fiery rage, she decided she’d had enough. Pele threw steam and lava at Kama Puaʻa, but he matched her every move, in turn creating an epic battle. After Pele called in reinforcements, Kama Puaʻa forcibly retreated into an ocean far from the boiling pits of lava. As soon as he touched the sea, he turned into the humuhumunukunukuāpuaʻa and swam to safety. 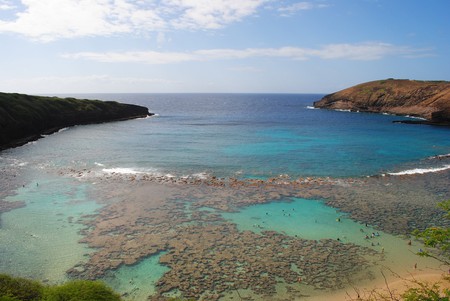 A humuhumu will spend its days gliding along the ocean floor eating algae and sucking up invertebrates hidden in the sand. At night, it heads back to its crevice in the reef and opens up three spines, which safely secure it into place. The fish can then sleep calmly knowing that no predator will be able to reach it. This behavior gave rise to the humuhumu’s other common name, the Wedge-tail Triggerfish.

With colorful reef fish, warm water temperatures year-round, and impressive coral formations, Hawaii is home to some of the best snorkeling spots in the world. Humuhumus prefer shallow outer-reef environments—perfect for novice snorkelers. The humuhumu is easily recognizable because of its distinct color and patterns.

Hanauma Bay on Oʻahu’s south shore is one of the best places to view a humuhumu in its natural habitat. The calm bay is a nature preserve and Marine Life Conservation District. It’s possible to swim alongside dozens of species of fish aside from the humuhumu, such as the kikākapu (Threadfin Butterflyfish), manini (Convict Tang), and kihikihi (Moorish Idol). 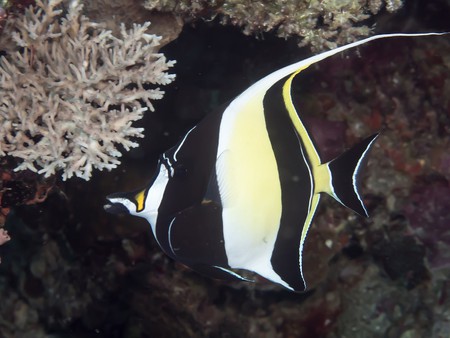