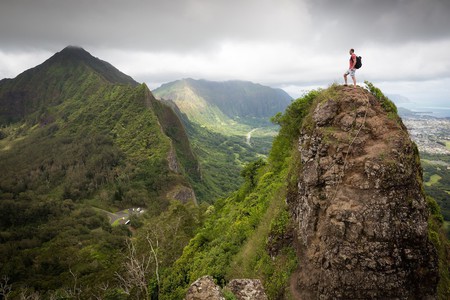 The Pali Notches hike has recently joined the ranks of social media favorites like the Haiku Stairs and Crouching Lion.

Hikers risk their lives climbing the treacherous spires of the Koʻolau Mountain Range, for the ultimate “do-it-for-Instagram” photo. But the effort to reach the end is definitely worth the scene that will be laid out in front of you. Most people don’t think about why there are manmade notches in the pali (cliffs) to begin with, but it’s a surprising story.

It all began back in the late 1700s during the Battle of Nuʻuanu and the first arrival of immigrants to Hawaii. This was a period in which Kamehameha—later to become King Kamehameha I—was struggling to unite the Hawaiian Islands under his rule. After conquering the Big Island, Maui, and Molokaʻi, Kamehameha made his way to Oʻahu, where chief Kalanikūpule was preparing for battle.

It is said that Kalanikūpule ordered his soldiers to cut notches in the ridgeline to house cannons, yet the official story is unclear. What we know for sure is that the perfectly-square and level notches in the Pali are not natural.

Kamehameha’s large army landed in Waikiki and Honolulu, where they quickly overtook Kalanikūpule’s ill-equipped forces, pushing them back up the valley to the Nuʻuanu Pali. Kamehameha sent a group up to the notches to disable the cannons, while the remnants of Oʻahu’s army made their last stance on the mountaintop. With nowhere else to run, hundreds of warriors jumped or were pushed off the sheer cliff face falling more than 1,000 feet. According to Pauline Frommer’s Hawaii, 800 human skulls were uncovered at the base of the mountain during a construction project in 1898. The Battle of Nuʻuanu is a pivotal moment in Hawaiian history, often referred to as Hawaii’s bloodiest battle, and the entire area is steeped in mystery and superstition.

The Pali Notches hike is known as one of the scariest and most deadly hikes in Hawaii, but rewards those daring enough with unparalleled panoramic views of the windward side of the island. Even though many hikers have been rescued, fallen, and have even died while attempting this trek, groups of adventurers head there every day.

Mondays are always better when you go hiking! 😈 Tag someone who would be down to climb this! 🌋Photography: @everchanginghorizon 🎥 ———————————————————————— P.S. – Feel free to DM us with any questions or concerns! And click the link in our bio for more great hikes on Oahu! Happy Hiking!

The hike is actually less than a mile, but is slow going with steep inclines, rock climbing, sketchy ropes, and sheer cliffs on all sides—not for the fainthearted. The trail takes experienced outdoorsmen over two of the manmade notches, before landing on the rock known as “the chimney,” and then continuing on an extremely photogenic ridge called Konahuanui. The Pali Notches is undoubtedly an unforgettable hike with stunning views that are truly unbeatable for those willing to take the risk.