The 10 Most Beautiful Buildings in Hawaii

‘Iolani Palace | © 12019 / Pixabay
Hawaii’s cultural history and rich diversity have shaped the islands’ art, design, and architecture styles over the centuries. With influences from Polynesia, the Americas, Japan, China, the Philippines and even Siberia, Hawaii has produced some striking and innovative edifices worth checking out.

Museum
Royal Mausoleum of Hawaii | © Daderot / WikiCommons
The Royal Mausoleum of Hawaii is the final resting place for members of the Kamehameha Dynasty and the Kalakaua Dynasty. These 2.7 acres, completed in 1864, house the somber tombs of the royal families as well as a small chapel in the Gothic Revival. Located in the lush Nuʻuanu Valley, it’s just next to the public O’ahu Cemetery.
More Info
Open In Google Maps
2261 Nuuanu Avenue, Nuuanu - Punchbowl, Honolulu, Hawaii, 96817, USA
+18085872590
Visit website

Hānaiakamalama was the summer retreat for Queen Emma and her family from 1857 to 1885. Also in the Nu’uanu Valley, it is now an exhibition showcasing the queen’s belongings and royal antiques.

The historic ‘Iolani Palace is one of a kind in the world of architectural innovations. Commissioned in the late 19th-century by King Kalākaua, it was built in a unique architecture style known as American Florentine, seen nowhere else in the world. For years it was the royal residence of the Kings and Queens of Hawaii, and it features a blend of Roman aesthetics with Hawaiian concepts. Curiously, the building was the first structure in Hawaii to have electric lights. ‘Iolani Palace is now a museum, and the public is free to admire the elegant koi wood staircase, private library, petite columns, sensuous curves and wide verandas. 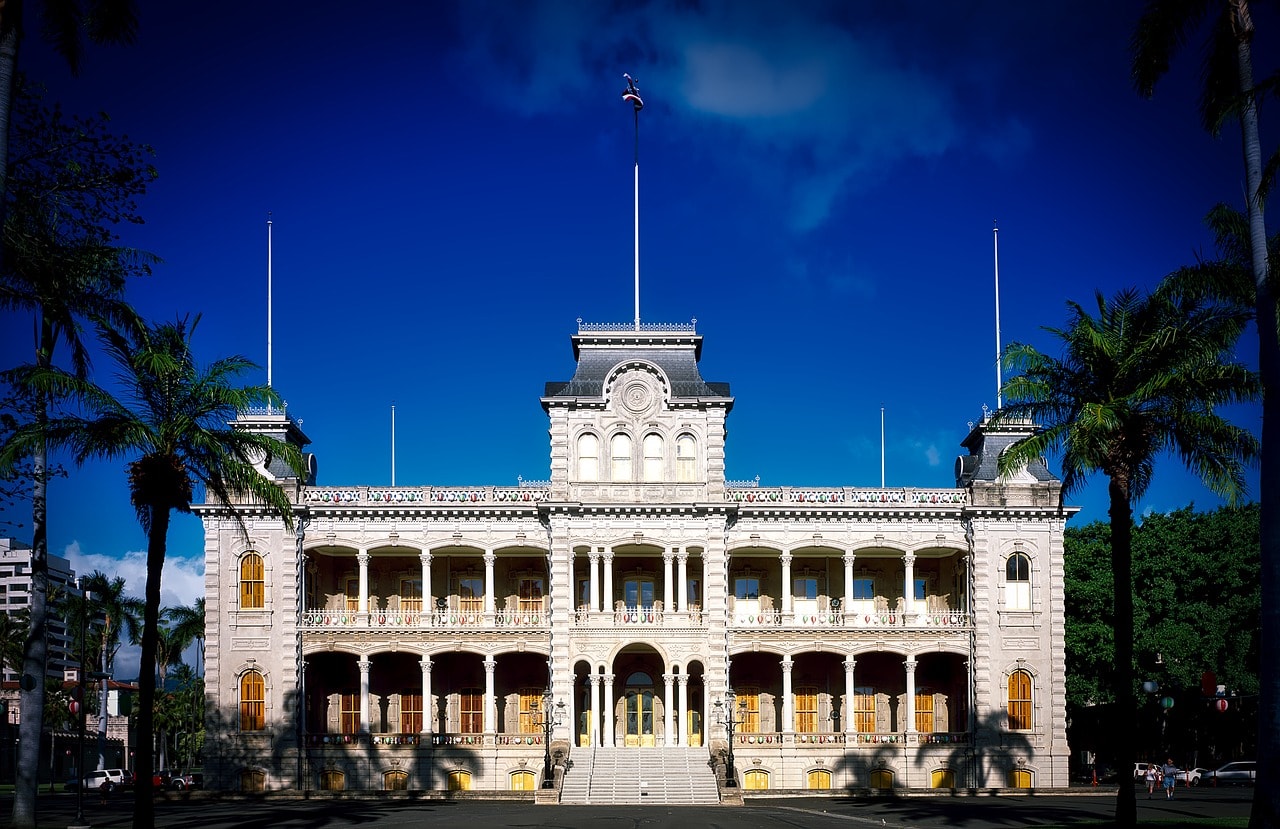 This iconic landmark, which opened in 1926, was once one of the tallest buildings in Hawaii, offering incredible views of the harbor. Once serving as a lighthouse to guide incoming boats, these days it’s an indelible feature of the Aloha Tower Marketplace. 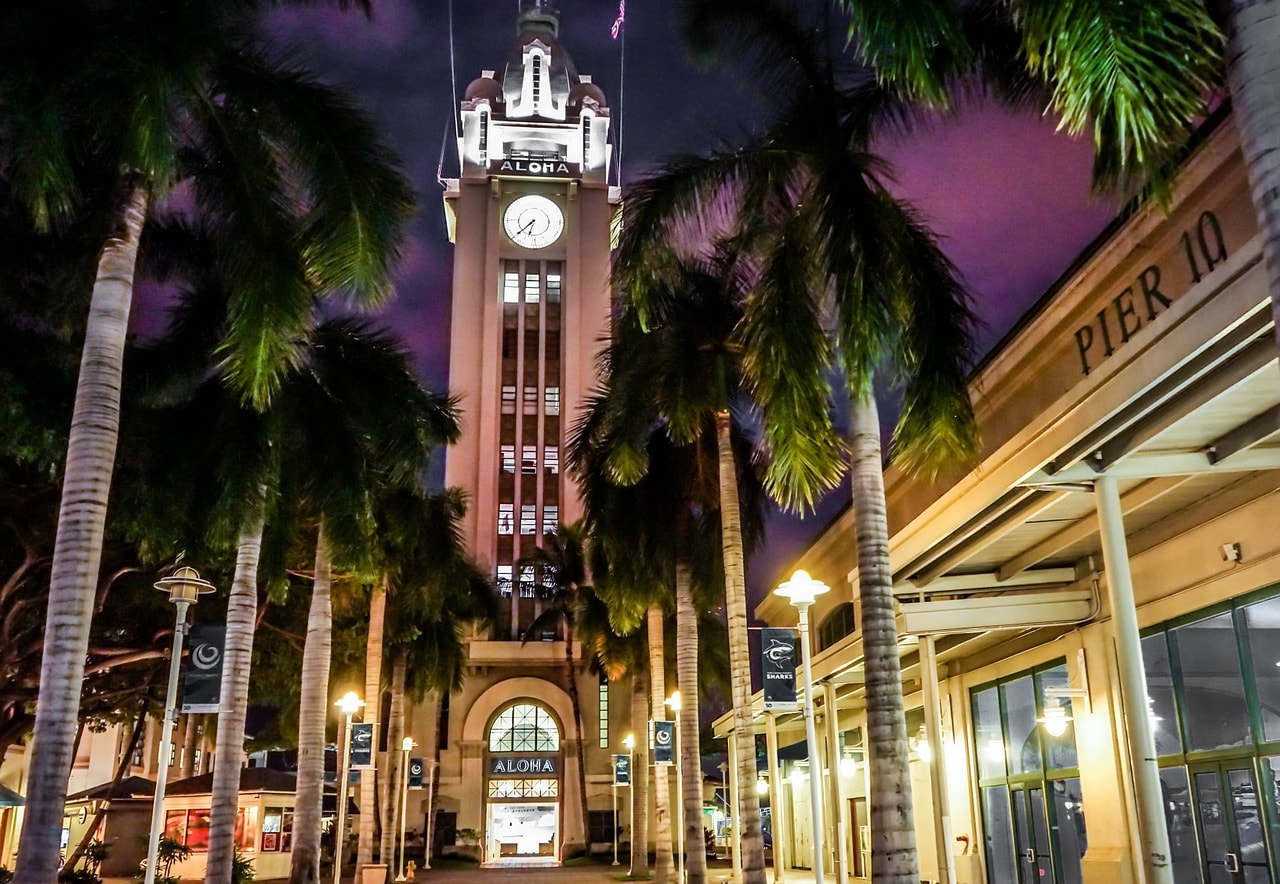 Forest, Historical Landmark
Designed by Russian-born, Tokyo-raised architect Vladimir Ossipoff, the Liljestrand House is a shining example of contemporary local design. Located on Mount Tantalus, this is a house that’s fully aware of its gorgeous tropical setting. Each room was designed to take full advantage of the breathtaking views of Diamond Head, Pearl Harbor, and Waikiki. The master bedroom is even tilted 45 degrees away to accommodate an adjacent forest of eucalyptus trees. How’s that for blending in with the surroundings?
More Info
Open In Google Maps
3300 Tantalus Drive, Makiki/Lower/ Punchbowl/Tantalus, Honolulu, Hawaii, 96822, USA
+18085373116
Visit website

Building
Hawaii State Capitol | © Daniel Ramirez / Flickr
Built in 1969, the State Capitol is often lauded as one of the most creative government buildings in the United States. The rooms were carefully designed as a small-scale metaphor for Hawaii: its legislative chambers resemble, architecturally, a volcano, with a chandelier in each room made from 620 nautilus shells, which represent the moon. Furnishings are made from koa wood, and a giant tapestry in sea and sky hues adorns the walls in each room. Outside, 40 concrete columns stand proud as substitute royal palms, and even the water surrounding the building is a metaphor, for the Pacific Ocean.
More Info
Open In Google Maps
415 South Beretania Street, Downtown, Honolulu, Hawaii, 96813, USA
+18085870478
Visit website

Cinema, Theater, Theatre
Hawaii Theatre | © Joel Bradshaw / WikiCommons
Downtown Honolulu is not all small stores or skyscrapers. It’s also home to the Hawaii Theatre, a historic Vaudeville theater, and cinema. Constructed in 1922, during the heyday of neoclassical theaters, it has elements of Byzantine, Corinthian, and Moorish decorating the outside—with a splash of Beaux-Arts brightening up the interior.
More Info
Open In Google Maps
1130 Bethel Street, Arts District, Honolulu, Hawaii, 96813, USA
+18085280506
Visit website

Built in memoriam to the 10,000 men and women from Hawaii who served during WWI, the Waikiki Natatorium War Memorial is a solemn testament to the Beaux-Arts style. In addition to the entrance arch, the natatorium also houses a large saltwater swimming pool, where, during the opening ceremonies in 1927, Olympic gold medalist Duke Kahanamoku swam to mark the occasion. These days, it’s a popular gathering place for locals and is on both the National and State Registers of Historic Places.